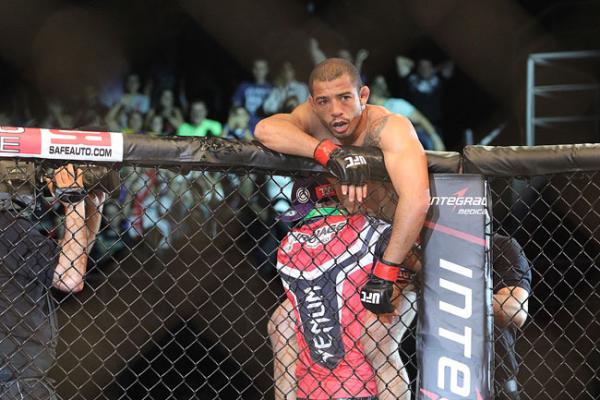 Jose Aldo injured his foot early in his featherweight title defense against Chan Sung Jung on Saturday at UFC 163, but Matt Serra was still impressed with his performance en route to a stoppage victory.

Serra, a former UFC welterweight champion, joined the Sherdog Radio Network’s “Rewind” show to discuss the fight and much more.

On Jung separating his shoulder: “I guess he had adrenaline going and what not, but until they stopped it, I give him credit: He was trying to fight still. That’s pretty wild, man. … That shows you the kind of warrior that he is. He knew something was wrong, but who knows if he knew what degree it was going to be messed up. Maybe he thought it would go back in? He was in the midst of battle. I think when he got taken down after that, I think that’s when he felt, ‘All right, something’s up here.’”

On whether you should hold back if you see your opponent has an injury like a separated shoulder: “No, man, because you don’t know if that thing’s going to go back in. I think you’ve got to attack that guy. This is a fight. … You never know what’s going to happen, and the fact [was] that the other guy had a pretty good poker face, even though you definitely saw something was up. [Aldo] did what any professional should do, and that’s take that guy out.”

On the fight up until that point: “[Aldo] was dominating. He was dominating. I think until the injury … it looked like it was going to be Aldo’s night unless the other guy pulled something out of his hat the next couple of rounds because I don’t think it was going great for him.”

On Aldo’s wrestling: “He was just outwrestling him. He was putting him down, and a couple of them were pretty nice. Boom, right to cross side. Then he tripped him down up against the cage. Was it the game plan? Who knows, but it is a mixed martial arts fight and he was in that clinch, and if he feels he can take him down, why not?”

On Aldo’s ground game: “I think he’s a legit black belt. I think he feels really comfortable down there, and you could tell the way he shook off some of those nice chokes ‘Zombie’ was looking for. At one point, I was like, ‘Oh s--t, man, he might have this,’ then I noticed [Aldo] had his jaw in. He looked comfortable with everything. I just think he’s so badass standing up that he doesn’t really utilize his BJJ too much because I don’t think that he feels he really has to. I don’t think he’s really sweating it when the guy gets back to his feet. I don’t think he really cares.”

Listen to the full interview (beginning at :50).