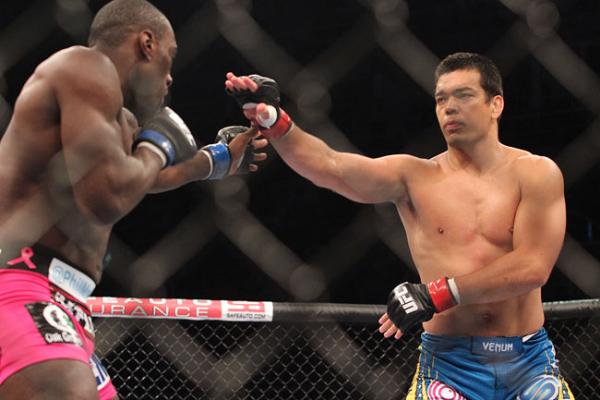 Count Matt Serra among those stunned that Phil Davis was awarded a unanimous decision Saturday over Lyoto Machida at UFC 163.

“I’ve met Phil Davis before,” Serra said during the Pro Perspective segment on the Sherdog Radio Network’s “Rewind” show. “He’s just such a nice guy. I hate to even say anything negative about him at all, but just for the fight itself I don’t know either guy. I’ll tell you, I thought Machida won that fight. I thought he did better exchanges on the feet. I don’t care what the numbers say. I’m saying when he would let go of his flurry, he backed him up a few times and landed the better strikes, I’d say, for the majority of all the rounds. [Davis] threw some stuff too, but I didn’t see anything really effective at all, with anything.”

The numbers actually support Machida, too. According to FightMetric.com, the Brazilian landed more significant strikes in rounds one and three, as well as overall. Davis did complete a couple of takedowns late in rounds, but Machida stopped eight out of 10 attempts.

“[Davis] got a takedown with less than a minute left or whatever it was, and every takedown, I don’t think anything happened with them at all,” Serra said. “There was no improvement of position. There was no power shots that was [like], ‘Hey, man, these are some hard shots.’ Not really anything. He was looking for a kimura that wasn’t there. Machida defended himself. It’s one thing if he’s got him down for that round and the majority of the round he’s on top of him but nothing’s happening. That, you could make an argument for, but it was for a short time.”

Serra questioned whether a fight should really come down to takedowns and a points game.

“Is that really what you’re doing or are you looking to take the guy out?” he asked. “Because that’s what it should be about. … It’s really getting away from the true spirit of the game, which was try to execute your game and figure out how you’re taking this guy out, not how you’re going to outpoint him.”

Machida has been involved in a few other controversial decisions in his career. He won a unanimous decision over Mauricio “Shogun” Rua in October 2009 that some felt he lost, dropped a split decision to Quinton Jackson in November 2010 that some felt he won and also won a split decision over Dan Henderson in February. It could be his style lends itself to controversy, but in this instance, Serra believes the judges just didn’t remember much of his offense.

“I think it’s less of that and it’s more of these judges have got short freaking memories,” Serra said. “They’re like, ‘All right, this round ended, and there was a lot of motion and then this guy was on top at the end.’ It’s one of those things. I think they’ve got short memories, these judges.”

This time Davis got the nod, and Serra made it clear he was just giving his opinion on the fight and has nothing against the rising light heavyweight. Like many, he simply thinks Machida won the fight.

“He definitely landed, I feel, the better strikes and he took away most of what Phil was trying to do,” Serra said. “Phil was game. He was doing what he could do. Listen, there’s been worse decisions out there, but at the same time, I was pretty shocked.”

Listen to the full interview (beginning at :50).