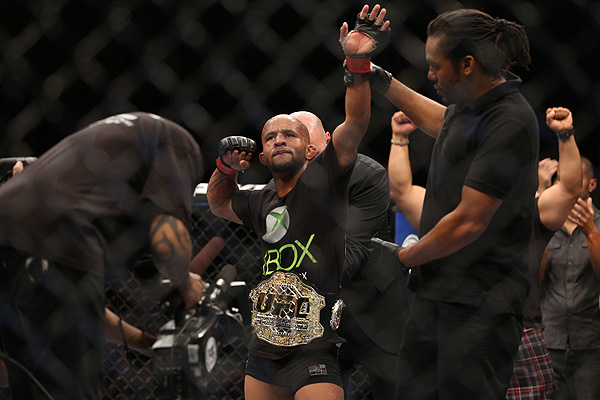 If there was any question as to whether Demetrious Johnson belonged among the sport’s pound-for-pound best, “Mighty Mouse” answered those doubts in convincing fashion in his second flyweight title defense at UFC on Fox 8. Facing heavy criticism for not finishing fights, the AMC Pankration product chose to go for broke against John Moraga, submitting the challenger with an armbar late in the fifth round.

Johnson’s ascent from quality bantamweight to world’s best flyweight is well-deserved, as his resume includes triumphs over the three men -- Ian McCall, Joseph Benavidez and John Dodson -- ranked just below him. In a still-shallow division, rematches with at least one, if not more, of the aforementioned contenders seem likely, but the lightning-quick Johnson has already proven he is a hard target to pin down.

Meanwhile, featherweight titlist Jose Aldo won his 16th straight fight at UFC 163, scoring a fourth-round technical knockout victory against Chan Sung Jung. It was not the most dominant of Aldo’s five title defenses in the UFC, but the Brazilian showed he is a versatile fighter by relying on his takedowns after injuring his foot early in the bout. The Nova Uniao product figures to face another strong contender in his next outing, as the likes of Ricardo Lamas, Cub Swanson and Frankie Edgar (again) await.


Facing an undersized opponent he was expected to handle with ease, Jones still impressed in his April 27 demolition of Chael Sonnen. The first-round TKO tied “Bones” with Tito Ortiz for a record fifth defense of the UFC light heavyweight title and, more importantly, paved the way for even bigger and more competitive bouts. When the 26-year-old mends from a nasty toe injury, he will face Swedish “Mauler” Alexander Gustafsson in the main event of UFC 165 on Sept. 21.


St. Pierre kept his chokehold on the 170-pound class by dominating Nick Diaz in a five-round rout at UFC 158, adding the brash Californian to a list of victims which includes Carlos Condit, Jake Shields, Jon Fitch, B.J. Penn and Matt Hughes. Still only four months removed from an 18-month hiatus due to ACL reconstruction, GSP said after the bout that he was looking to take a break. When he returns at November’s UFC 167, St. Pierre will have to deal with another tough challenger in Johny Hendricks.


The featherweight division’s Brazilian ace was not at his leg-kicking best at UFC 163, thanks to a foot injury sustained early in the bout; but, as champions do, Aldo found a way to win. When challenger Chan Sung Jung separated his shoulder in the fourth round, Aldo pounced on his wounded foe and pounded out his fifth consecutive title defense. While the Nova Uniao fighter continues to discuss a potential move up to lightweight, there are plenty of 145-pound challengers hungry for a shot, including Ricardo Lamas and Chad Mendes.


For the first time in 17 UFC appearances, Silva’s night ended without his hand being raised at UFC 162. After taunting, baiting and clowning Chris Weidman for little more than a round, the Brazilian met his demise when the challenger connected with a left hook and follow-up punches to put a shocking and abrupt end to Silva’s championship reign 1:18 into round two. Until he steps into the Octagon again, the debate will rage on as to why “The Spider” suffered the first loss of his UFC career. Was it his apparent disregard for Weidman’s skills or was it something deeper, such as a waning motivation to compete? Silva took UFC President Dana White up on his offer of an immediate rematch and will try to take back his belt at UFC 168 in December.


After a dominant victory over Nate Diaz in December, “Smooth” returned to his habit of winning closely contested decisions at UFC on Fox 7. Paired with former Strikeforce titlist Gilbert Melendez, Henderson held off his foe to earn a razor-thin split verdict. There will be no immediate rematch for “El Nino,” however, as Henderson will next defend his crown against Anthony Pettis at UFC 164. While Henderson has yet to finish an opponent in seven Octagon appearances, his resume -- which also includes wins over Frankie Edgar (twice), Jim Miller and Clay Guida -- remains one of the strongest in the sport today.


Velasquez celebrated Memorial Day in Las Vegas with his first successful defense of the UFC heavyweight strap. The sport’s top big man steamrolled Antonio “Bigfoot” Silva at UFC 160, setting up an October rubber match with Junior dos Santos, whom Velasquez dominated across five rounds in December to take back the belt. Dos Santos remains the only blemish on Velasquez’s record, which includes first-round finishes of Silva (twice), Antonio Rodrigo Nogueira and Brock Lesnar.


For months, Weidman claimed he was the man to dethrone reigning middleweight champion and pound-for-pound king Anderson Silva. In the UFC 162 main event, he backed up his talk, knocking out the Brazilian a little more than a minute into the second frame. The Serra-Longo Fight Team member has demonstrated rapid progression in each fight, and his blend of wrestling, jiu-jitsu and constantly improving standup makes him a formidable obstacle for any potential challenger. Weidman will attempt to repeat his feat and prove that his win over Silva was no fluke when they rematch on Dec. 28.


There is “Mighty Mouse,” and then there is the rest of the flyweight division. The UFC’s littlest champ used his unparalleled speed and potent ground game to place challenger John Moraga firmly in the latter camp on July 27, when Johnson scored his long-desired first finish in the Octagon via fifth-round armbar. With wins over Joseph Benavidez, Ian McCall and John Dodson, Johnson’s only problem now is finding a suitable challenger. One could emerge from Benavidez’s Sept. 4 meeting with Jussier da Silva, but in the meantime, Johnson has been discussing the possibility of moving up the scale for a super fight.


At UFC on Fox 7, Melendez proved he belonged among the divisional and pound-for-pound elite by giving reigning UFC 155-pound champion Benson Henderson all he could handle in the headliner. It was not enough to get the nod from two of the three cageside judges, however, as the Skrap Pack member’s pace slowed slightly down the stretch en route to losing a controversial split decision. The narrow nature of the defeat means “El Nino” will not be too far removed from title consideration. First, he will have to go through Diego Sanchez at UFC 166 in October.


Barao successfully defended the UFC interim bantamweight strap against 22-year-old prospect Michael McDonald at UFC on Fuel TV 7 in February. With a resume that includes triumphs over Brad Pickett, Scott Jorgensen, Urijah Faber and the aforementioned “Mayday,” Barao has earned his place atop the division, even if his title comes with a “temporary” label. A second title defense against Eddie Wineland at UFC 161 fell through when the Brazilian suffered a foot injury; the bout has been rebooked for UFC 165 on Sept. 21.