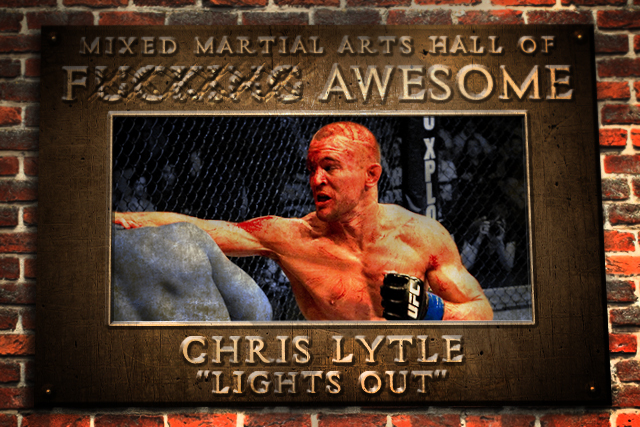 Headquartered in scenic Woodloch, Texas, the Mixed Martial Arts Hall of [email protected]#$%&g Awesome (HOFA for short) commemorates the achievements of those fighters who, while they might not be first-ballot selections for a traditional hall of fame, nonetheless did remarkable things in the cage or ring, and deserve to be remembered. The HOFA enshrines pioneers, one-trick ponies and charming oddballs, and celebrates them in all their imperfect glory. While the HOFA selection committee’s criteria are mysterious and ever-evolving, the final test is whether the members can say, unanimously and with enthusiasm, “____________ was [email protected]#$%&g awesome!”


“People ask me a lot why I chose to become a fighter. I tell them all the same thing: I didn’t choose it, it chose me.” – Chris Lytle


If you were a mixed martial arts fan from 2007-2011, during the final stretch of his Ultimate Fighting Championship run, certain phrases come to mind instantly when you hear the name Chris Lytle, almost like free association: action fighter. Tough as nails. Bonus magnet.

However natural it feels to hang those accolades on Lytle -- and they are all well-deserved -- they almost do him a disservice. When we speak of exciting fighters, the ones who always come to scrap and are rarely in a boring fight, we often mean fighters who aren’t that great but are popular with fans and useful to the promotion. They’re the kind of fighters who end up headlining the prelims or opening the pay-per-view main card, the fighters who know their job is secure even if they lose three straight.

To characterize Lytle as nothing more than an entertaining scrapper in that mold would be a shame. Lytle wasn’t an “action fighter” so much as a very, very good fighter with a penchant for action-packed fights. He was the first UFC fighter to complete a career performance bonus trifecta, winning Knockout, Submission and Fight of the Night, but he was also a longtime Top-10 welterweight with wins over numerous other contenders, and he came within a hair of fighting for a UFC title. He was a professional boxer, yet also a fantastic grappler who picked up three “Submission of the Night” bonuses. He was old-school enough to be a bridge between eras; at the time of his retirement in 2011, he was one of a handful of fighters left on UFC roster who had debuted in the pre-Zuffa era, and may be the last who did not use testosterone replacement therapy.

Lytle’s competitive high-water mark is the night he nearly earned that UFC title shot. His split-decision loss to Matt Serra at “The Ultimate Fighter 4” Finale was contentious to say the least, a rare case of a high-stakes UFC fight being decided by 30-27, 30-27 and 27-30 scorecards, and it bears mentioning that Sherdog’s official play-by-play scored the fight 30-27 for Lytle. From there, Serra would of course go on to make history, taking the welterweight belt from Georges St. Pierre in one of the greatest upsets of all-time. Meanwhile, Lytle did exactly what one might expect of a veteran of 40 fights who had never stopped working as a full-time firefighter. He dusted himself off and fought for another half-decade, hovering around the fringes of contention while picking up a whopping 10 UFC performance bonuses in 12 fights.

Lytle retired from competition in August of 2011. He was 36 years old and in apparent good health, especially for a man with over 50 professional fights. He was competing in the UFC’s welterweight division, one of the deepest and most unforgiving in the sport, yet he had won five of his last six fights and seven of his last 10. It could be argued that he was at his competitive peak, but citing his desire to spend more time with his family, Lytle walked away from mixed martial arts in a manner so rare as to be nearly unique. More on that later.

In retirement, Lytle has stayed busy. In addition to continuing to serve his community as a firefighter, he started the Chris Lytle Foundation, which works to combat school bullying. He ran for the Republican nomination for a seat in the Indiana State Senate. And, unable to ignore the competitive itch completely, he took up the old-now-new-again sport of bare-knuckle boxing in 2018, winning his debut fight in January via knockout.

SIGNATURE MOMENTS: It is no surprise that a man with 25 career finishes and 10 UFC post-fight bonuses has a lot to choose from here. From a technical standpoint, Lytle’s win over Matt Brown at UFC 116 stands out as a remarkable piece of work. In 2010, Brown was still a year or two away from being the terror of the welterweight division but was nonetheless a force to be reckoned with, an aggressive muay Thai brawler with knockout power in all eight points, a mean streak… and somewhat porous submission defense. In other words, the type of fighter who seemed like a perfect foil but was in fact out of his depth against Lytle's solid boxing and slick grappling.

In the second round, Lytle rocked Brown with an uppercut, grabbed a guillotine and hustled him to the floor. From there, he put on a 60-second jiu-jitsu clinic that beggars belief. Lytle moved to mount while still holding the front headlock, then transitioned to a mounted triangle choke. While still triangling Brown’s neck with his legs, Lytle then isolated Brown’s right arm in a straight armbar. When that arm was torqued to the breaking point, Brown was forced to submit verbally, because -- surprise! -- Lytle had managed to trap Brown’s other arm with his legs as Brown tried to free himself from the armlock. In the end, it looked as if Brown was being restrained by three people at once, one of whom was sitting on his head and all three of whom were better grapplers.

However, there can only be one signature moment for “Lights Out.” Lytle had announced in advance that his fight with Dan Hardy in August of 2011 would be his last. Other than the TUF 4 finale, UFC Live: Hardy vs. Lytle was his first and only time headlining a UFC event. With the stage thus set, there was no pressure on Lytle other than whatever impetus he felt to put a proper end on his own story. Lytle defeated the one-time welterweight title challenger via third-round guillotine choke, picked up dual bonus checks for “Fight of the Night” and “Submission of the Night” and rode off into the sunset. There was no tragic career-ending injury, no slow, depressing decline. Lytle did not leave the UFC on a losing streak only to labor in the minor leagues of MMA for smaller and smaller paychecks. The man simply left the sport on a high note befitting his status as a fighter who was very good for a very long time, then hung up his gloves, just as he said he would, and went to spend more time with his family. In a sport that offers a million highlights but few happy endings, his was a script almost too good for Hollywood.

THE HOFA COMMITTEE SAYS: There is no question here. Lytle checks all of the boxes, as an all-time action hero, an underrated fighter across at least two eras, one of the toughest outs in the history of the sport and a seemingly legitimate good guy. He would be a likely HOFA candidate even if not for that last glorious night in Milwaukee, but providing one of mixed martial arts’ true feel-good moments simply seals the deal.

It is with great pleasure that we say: Chris Scott Lytle, you are [email protected]#$%&g awesome.
« Previous Next »