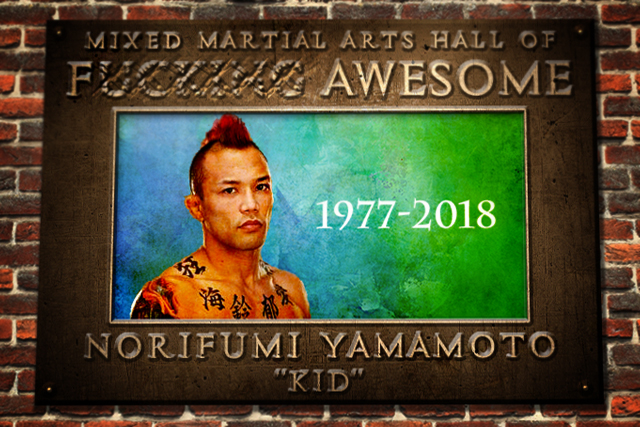 Headquartered in scenic Woodloch, Texas, the Mixed Martial Arts Hall of [email protected]#$%&g Awesome (HOFA for short) commemorates the achievements of those fighters who, while they might not be first-ballot selections for a traditional hall of fame, nonetheless did remarkable things in the cage or ring, and deserve to be remembered. The HOFA enshrines pioneers, one-trick ponies and charming oddballs, and celebrates them in all their imperfect glory. While the HOFA selection committee’s criteria are mysterious and ever-evolving, the final test is whether the members can say, unanimously and with enthusiasm, “____________ was [email protected]#$%&g awesome!”


During his 2001-2007 heyday in Shooto and K-1, one can make a very good case that Norifumi Yamamoto was the best sub-lightweight fighter in the world. He was indisputably the most terrifying.

“Kid” was a diminutive whirlwind of destruction, a cross between a fun-sized Incredible Hulk and the Tasmanian Devil. In the 2000s, Japanese fighters fighting several divisions above their ideal weight class was nothing new, but Yamamoto’s specific modus operandi was shocking to witness. Where fighters like Kazushi Sakuraba used creativity and craft to hold their own against larger men, Yamamoto simply dashed across the ring, flung them to the ground and smashed them to pieces. Again and again, Yamamoto did the physically improbable: effortlessly taking down foes who outweighed him by 20 or 30 pounds, pounding out taller fighters with punches and hammerfists from full guard, starching people with a kind of knockout power rarely seen in those weight divisions before or since -- not to mention the additional handicap of Shooto’s pillowy gloves -- until he seemed like a miniature superhero.

That the superhero had a bit of anti-hero in the mix only deepened his appeal. Yamamoto was heavily tattooed at a time when that was exceedingly rare among Japanese fighters due in large part to the local perception of association with criminal elements. Japanese tabloid Shuken Gendai, source of the stories that helped precipitate the demise of Pride Fighting Championships, accused him in 2008 of being a frequent cannabis user, a claim that wouldn’t have raised eyebrows if directed at an active American fighter but carries enormous stigma in Japan. And while Yamamoto was a far cry from the raised-middle-finger heel antics of fighters like Shinya Aoki, he sported a brash, sometimes surly charisma that fit the savagery of his in-ring performances to a tee.

Yamamoto went 17-1 with one no-contest to open his career, and could easily have gone 19-0 if not for some breaks. He spent a round-plus outwrestling Josh Thomson, who would soon spend more than a decade as a Top-10 fixture at lightweight, before suffering an inadvertent, fight-ending groin strike that rendered the fight a no-contest. Against Stephen Palling, Yamamoto shot a double-leg, took the Hawaiian brawler down and settled into his foe’s guard -- where Yamamoto managed some of his most authoritative finishes -- only to start pouring blood from a gash opened by Palling’s knee glancing off Kid’s forehead. The referee waved the fight off before the doctor even made it across the ring, and it was all over in 30 seconds, a TKO loss snatched from the jaws of victory.

By the time of Yamamoto’s long-overdue Ultimate Fighting Championship debut in 2011, he had a couple of legitimate losses and lengthy layoffs on his ledger and some of the mystique was gone. Nonetheless, it was cause for excitement for the longtime fans who had spent much of the previous decade speculating on dream matchups with stateside counterparts like Urijah Faber. It ended in disappointment; Yamamoto went 0-3 with one no-contest in the UFC and rarely looked anything like his vintage self.

Even in the disappointment, though, there were things to take away, something that put his former dominance into perspective. To watch Yamamoto face off against Demetrious Johnson at the UFC 126 weigh-ins, and realize that “Kid” was the same size as an undersized bantamweight who was already seen as the champ-in-waiting whenever the UFC instituted a 125-pound division, was jaw-dropping. The man who had given a young Thomson all he could handle, who had crushed Royler Gracie, who had punted Rani Yahya into the third row… could have been a flyweight the whole time.

Post-UFC, Yamamoto settled into a mentor’s role. His Krazy Bee gym housed top-notch products such as flyweight contender Kyoji Horiguchi and One Championship lightweight champ Kotetsu Boku, and rumors would crop up periodically about a “Kid” comeback fight.

It was not to be. In August 2018, Yamamoto announced to the world that he was battling cancer. Weeks later, on Sept. 18, he passed away. He leaves a legend that was larger than life, but then again, that had always been the point.

Signature Moments: From a competitive standpoint, Yamamoto’s crowning achievement was winning the K-1 Hero’s 2005 Middleweight (154-pound) Grand Prix. At Hero’s 3 in September of that year, he knocked Royler Gracie out cold with a blistering right hook, then later that same evening, carved up Caol Uno in increasingly dominant fashion over two rounds until the fight was stopped on cuts. While Gracie was 39 and had never been a great mixed martial artist, Uno was a legitimate Top-10 lightweight and former UFC title contender.

The Grand Prix final against Genki Sudo on New Year’s Eve was marred by an early stoppage. In the first round, Yamamoto knocked Sudo down and began to apply his infamous ground-and-pound, landing heavy strikes but with Sudo very much conscious and trying to defend himself when the referee waved the fight off. Whether that referee robbed Sudo of a comeback win or merely of more unanswered blows to the face is hard to say, but the fact remains: Yamamoto was the K-1 Hero’s Grand Prix Champion.

If that three-fight run represents Kid’s competitive apex, he has plenty of highlight moments from which to choose. The aforementioned knockout of Gracie was set up by a vicious left to the body seconds before, and caught Gracie as he was stepping in to throw an ill-advised knee. The Brazilian jiu-jitsu legend was rendered senseless in an instant. Yamamoto’s four-second knockout of Kazuyuki Miyata is still one of the fastest in the history of major MMA, and one of the most brutal flying knees ever seen. Yamamoto literally ran through Miyata, knocking him cold and sticking the 180 degree landing, in perfect position to land a single standing-to-ground coffin nail.

For sheer brutality, Yamamoto’s knockout of Yahya at K-1 Premium Dynamite! on New Year’s Eve 2007 would be hard to top. For a round and change, Yahya, fresh from winning the Abu Dhabi Combat Club 66kg title, found surprising success exchanging on the feet with Yamamoto. Until he didn’t. Early in the second round, “Kid” rocked Yahya with a right hook, dropped him to his seat with a left and then completely obliterated him with two soccer kicks to the face. Yahya was left dazed and writhing in pain on the canvas as Yamamoto celebrated his last great win.

The HOFA Committee Says: Yamamoto’s “it” factor is difficult to explain but easy to quantify: He was always the smaller man in the ring, he always came forward with pure aggression, he threw every strike with murderous intent, and during his prime it seemed to work every time. His blend of straightforward achievement and a highlight reel for the ages make him an easy call for the Hall’s first posthumous induction.

It is with heavy heart that we say: Rest in peace, “Kid” Yamamoto, you were [email protected]#$%&g awesome.
« Previous Next »