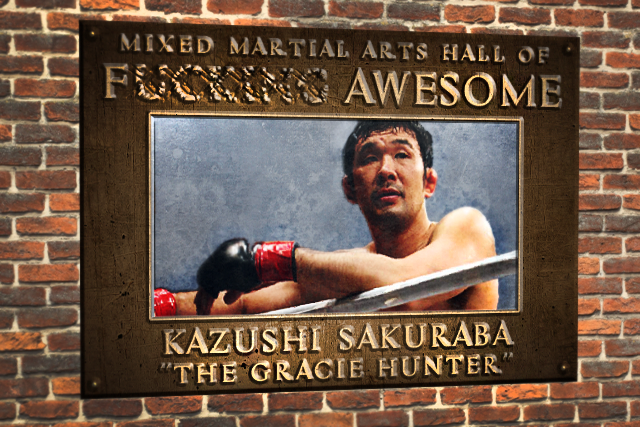 He was “The Gracie Hunter” and the giant-killer. The consummate showman, in and out of the ring; a court jester and a king.

The qualities upon which “Saku” built his legend — a wildly creative fighting style, self-effacing humor and blood-and-guts toughness — also made him the apotheosis of an era in Japanese MMA. He was the gold standard for professional wrestlers crossing over to success in no-holds-barred fighting, which was the prime driver behind the creation of Pride Fighting Championships, and with all due respect to “Mr. Pride,” Akira Shoji, Sakuraba became the man most synonymous with Japan’s greatest mixed martial arts promotion. In classic kakutogi hero fashion, Sakuraba also seemed to scoff at the very notion of weight classes — or at best, regarded them as suggestions rather than barriers. More on that later.

An accomplished wrestler in high school and college, in the early 90s Sakuraba plunged into Japan’s professional wrestling scene, which, especially at the time, focused on stiff, realistic-looking matches and traded on the notion that its top wrestlers were legitimately the toughest men in the world. With the simultaneous rise of what would soon be known as mixed martial arts, a collision was inevitable and not long in coming. By 1997, when Pride debuted with a humiliating thrashing of Nobuhiko Takada, a wrestling stablemate of Sakuraba, at the hands of Rickson Gracie, Sakuraba already had a couple of MMA fights under his belt — including his lone foray into the UFC — and was ready to jump in. He would end up saving not just professional wrestling’s honor, but possibly Pride Fighting Championships itself. It is extremely unlikely that the promotion would have lasted as long as it did, or reached the same heights, if it had continued as an unrelenting parade of Japanese pro wrestlers being smashed by Gracies. Sakuraba was the first and greatest to buck that trend, and his series of fights with Brazilian jiu-jitsu’s first family is notable as much for its symbolism as for the endlessly creative ways in which he sought to counter their art.

Those who are familiar with the HOFA will know that willingness to fight much larger men or women is hardly an uncommon trait within these walls: Genki Sudo once fought a man who was literally more than twice his size, while Jose Landi-Jons and Megumi Fujii were so far ahead of their time that for much of their careers, appropriate weight classes for them barely existed. Even in comparison to his fellow inductees, however, Sakuraba’s approach was heroic. It was also borderline insane, and for both reasons it helped make him a beloved icon.

Sakuraba walked around at a slightly soft 185 pounds for most of his career — he lied about his weight to get into the UFC Japan heavyweight tournament — and would probably have been best suited to welterweight, physically. However, the true difference between Sakuraba’s exploits and those of his HOFA mates is that while Sudo was fighting 300-pound-plus sideshow attraction Eric “Butterbean” Esch, Sakuraba spent his prime years fighting the best fighters in the world, two or three classes above his own ideal weight: Igor Vovchanchyn. Mirko Filipovic. Quinton Jackson. Wanderlei Silva…three times. In the first 30 fights of his career, from his debut until his surprising jump from Pride to K-1 in 2006, Sakuraba lost nine fights, and of the seven men who accounted for those losses, Antonio Schembri was the only one remotely close to his own size.

Of course, if all “Saku” had done was to go out bravely and get walloped by much bigger men, we wouldn’t be discussing him right now. He also defeated quite a few of them, including the aforementioned “Rampage” and what we might politely call the “Pride versions” of Vitor Belfort and Kevin Randleman.

Eventually, Sakuraba’s big-game-hunting ways caught up with him in the form of physical wear and tear, and his performances tailed off quickly after leaving Pride. He fought on for five more years as his body gave out on him, even making the comically late drop to welterweight. By 2010, his knees appeared to be held together by tape — and his ears literally were, as we learned when he lost half of one in his fight with Marius Zaromskis.

Effectively gone from MMA by 2011, Sakuraba came back in 2015 for one final bout in Rizin Fighting Federation. After that fight, a one-sided hammering by Shinya Aoki, he retired. In the years since, he has stayed sporadically active in grappling competitions and exhibitions, and in 2017, the UFC had one of its periodic blind-squirrel-finds-the-acorn moments, inducting him into the Pioneer Wing of its Hall of Fame.

SIGNATURE MOMENTS: The most significant achievement of Sakuraba’s career, the source of his nickname and the place from which his legend springs, is his series of fights with the Gracie family. At a time when professional wrestlers were being exposed by “real fighters,” with the Gracies leading the charge, Sakuraba stemmed the tide, taking down Royler, the greatest pure grappler of that generation; Royce, the three-time UFC tournament winner and face of the family from the MMA perspective; and Renzo, the most accomplished mixed martial artist of the bunch. It would be difficult to overstate the impact of those wins: Sakuraba handed Royce the first loss of his career, Renzo his first stoppage, and his win over Royler at Pride 8 was the first loss by any Gracie in mixed martial arts. He did it despite acquiescing to special rules requests — he famously quipped about the 90-minute, no-referee-stoppage terms of the Royce fight that it would be a long time for him to go without a cigarette — and the family wouldn’t get back a clean win over him until the very end of his career.

Highlights? There are too many to count. His technical submission of Renzo at Pride 10 gave us an indelible visual: the toughest Gracie, utterly beaten yet refusing to tap even with his arm contorted at a shocking angle. While the 90-minute marathon against Royce included a few stalemates, it also featured what is likely the first flying guard pass in MMA history, and true to form for a Sakuraba highlight, it left you laughing even as it got the job done. The win over “Rampage” Jackson at Pride 15 in 2003 resembled a bull ride more than a martial arts contest — that is, if bull rides routinely ended with the cowboy choking out the bull. Sakuraba calmly withstood some shocking displays of physical strength and athleticism from the future light heavyweight great before taking over with his far more advanced ground game.

THE HOFA COMMITTEE SAYS: There is no question here. As an example of a fighter whose greatness, and whose importance to the sport, are not reflected in his record of wins and losses, it would be hard to top “The Gracie Hunter.” This is no somber enshrinement, however, as the defining characteristics of Sakuraba’s career are the creativity, humor and joy that sit so comfortably beside his toughness and skill.

It is with great pleasure that we say: Kazushi Sakuraba, you are [email protected]#$%&g awesome.

Note: While writing this induction article, the HOFA committee found itself thinking back on Jonathan Snowden's excellent work “Shooters: The Toughest Men in Professional Wrestling” so often, and missing our long-lost physical copy so badly, that we procured the Kindle version for research purposes. Highly recommended.
« Previous