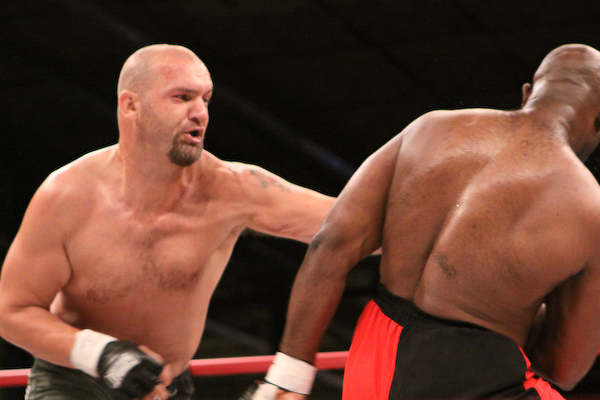 On Saturday night, Tyrone Spong will compete in a different kind of fight.

The accomplished heavyweight kickboxer will make his mixed martial arts debut at 205 pounds against nine-fight pro Travis Bartlett (pictured, left) at the World Series of Fighting’s inaugural event at the Planet Hollywood Resort and Casino in Las Vegas. Spong’s bout, along with the rest of the main card, airs live on NBC Sports Network. Meanwhile, the preliminary proceedings stream immediately prior on Sherdog.com.

Despite Spong’s Nov. 3 showdown with Bartlett serving as his foray under mixed rules, Spong, 27, says he feels no pressure in transitioning from kickboxing to MMA.

“I’m very happy to be here. I like challenges,” Spong said at Thursday’s pre-fight press conference. “I’ve achieved a lot in kickboxing, and I just needed something new. I came to the states and trained with a lot of MMA guys and thought I’d give it a chance. [There is] no pressure. I believe in myself, and I’m doing this for myself. Of course, I would like to put on a great fight for the fans and the people who stand behind me, but I’m just looking forward to this Saturday.”

One of the fighters with which the Surinamese-born Dutchman has trained is Anthony Johnson, a fellow member of the Florida-based Blackzilians camp. Known to most fans as “Rumble,” Johnson formerly competed for the UFC at 170 pounds and now makes his WSOF debut as a light heavyweight against Bellator veteran D.J. Linderman. According to Spong and Johnson, their collaboration in training has proved fruitful for both parties.

Spong likely hopes to use those newfound wrestling skills to keep the fight standing, where he should -- on paper, at least -- outclass his opponent. However, Bartlett -- a heavy-handed southpaw -- says that if Spong wants to go toe-to-toe, he will oblige the highly-regarded striker. According to the American, he will try to take Spong down only if the kickboxer keeps his distance and looks to attack primarily with leg kicks.

“I have no secrets. I fight one way,” said Bartlett. “If he wants to see who can own the real estate, I’m [in]. If he’s playing the leg kick game, then I’m going to have to pressure him and go for shots. But if he wants to go mano-a-mano in the middle of the cage, I’m up for it.”