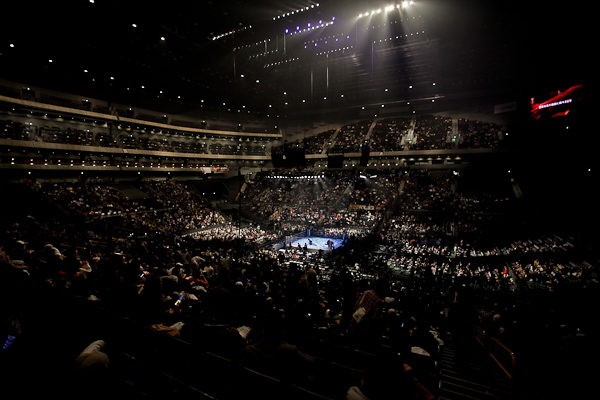 “It was a very difficult decision to make, considering the inconvenience this would cause to the schedule of fighters and fans, so we want to apologize to [everyone],” said GSI’s Pierre Andurand in a written statement.

“However, we decided to do this because of our strong conviction that a combined show would be the best format for the fighters and fans, because everyone can be together at one time. It'll generate a lot of positive energy for the Japanese fight industry and for fight fans around the world.”

In making the mega event, the show’s official title will also see a change to “Dream 18 & Glory 4: New Year’s Eve Special 2012.” According to former Dream event producer and current spokesman Keiichi Sasahara, the card composition is projected to contain seven to nine MMA bouts alongside a 15-fight heavyweight kickboxing tournament, kicking off at 4 p.m. local time in Japan and ending at the stroke of midnight. No new matchups were announced, but both Sasahara and Golden Glory’s Bas Boon claimed that weekly fight announcements would begin soon.

“I witnessed the high times of the fighting sports in Japan with the peak in 2003, when there were three New Year’s Eve events on one night. Our goal is to have the best of those three events of that time, to be presented now in one mega event in Saitama Super Arena,” said Boon. “[From] the feedback from the fighters participating on Dec. 2, they also were asking if they could participate on New Year’s Eve, which is a tradition in Japan. Combining two shows, we can allow everyone to fight at the Saitama Super Arena, which is a very prestigious [venue].”

Regarding the event’s international broadcast, GSI director Marcus Luer claims that details are still being worked out. For its part, Glory’s international partners will likely carry the Dream and GSI co-promoted card, but North American broadcast plans in particular have yet to be decided.

“I’m pretty confident we’ll have large distribution around the world and I’d love to tell you right now who it will be [with] in the U.S. I can’t tell you yet, but I’ll be in the U.S. next week, meeting a whole bunch of broadcasters, and I’m quite confident I’ll have a good announcement on that soon,” said Luer to Sherdog.com.

Japanese broadcast plans have also yet to be decided, though long-time premium cable partner Skyperfect Television will host the event domestically, with Dream’s Sasahara citing the format likely being a free undercard leading into a pay-per-view event. Despite GSI’s expressed aims to rejuvenate the Japanese fight scene by merging both shows, this year’s “double event” makes it much like previous years’ Dynamite!! series, in effect providing Japanese fans an unbroken continuum of kickboxing and MMA events on New Year’s Eve. Presently, only Strikeforce and Pride veteran Tatsuya Kawajiri, Dream featherweight champion Hiroyuki Takaya, and former Sengoku lightweight champion Satoru Kitaoka have been announced as participating in MMA bouts.