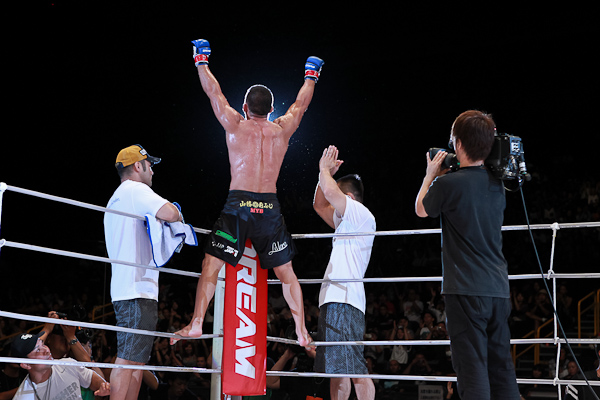 TOKYO -- Tatsuya Kawajiri turned in a quintessential “Crusher” performance at Dream 18 on New Year's Eve, flattening Michihiro Omigawa for three rounds and nullifying any offense from the UFC veteran. The featherweight bout was the main event of the MMA portion of the MMA-kickboxing double-feature New Year’s Eve event.

Kawajiri was able to impose his usual game plan on Omigawa, using well-timed takedowns and a significant strength advantage to take his judoka opponent to the mat and keep him there. Omigawa did his best to free himself and return to his feet, but Kawajiri gave him little space to work.

Crusher was able to take the mount position on multiple occasions during the fight, nearly finishing with two strong arm-triangle choke attempts in the second and third rounds. Omigawa was able to hold on and survive, but in the end, all three judges scored the fight for Kawajiri. With the win, Kawajiri remains undefeated since making the drop to featherweight in 2011.

“I fought to attack his faults. Striking, going for the takedown and then attempting the arm-triangle,” said Kawajiri, post-fight. “I almost got it, but I didn’t want to get overconfident. I tried to build the fight carefully. I think I showed I’m different from other Japanese fighters.”

Tachi Palace Fights featherweight champion Georgi Karakhanyan outpointed Dream title-holder Hiroyuki Takaya en route to a unanimous decision victory in the night's co-main event. The California native used a varied game to keep Takaya on the defensive, completing takedowns, landing shots from the clinch and generally outstriking the Japanese fighter. The fight wasn't one-sided, however, as Takaya was able to land punch combinations of his own from time to time and spent some time on top of Karakhanyan in the guard. For his efforts, Takaya received the nod from judge Hikaru Adachi, though judges Akira Shoji and Masato Fukuda scored the bout for Karakhanyan, making him the winner by split decision.

In an unexpected finish, Shinya Aoki defeated UFC vet Antonio McKee by submission due to strikes in the early goings of the second round of their lightweight affair. The Japanese grappling ace dominated McKee in the opening round, taking him and attacking with strikes and submission attempts from the top position. Early in the second round, the “Tobikan Judan” clipped McKee with a winging counter-right that put the American through the ropes. Aoki attempted to follow up with punches as McKee motioned to referee Kenichi Serizawa that he had enough. Serizawa stepped in to wave Aoki off at only 24 seconds of the second round.

Brazilian jiu-jitsu specialist Bibiano Fernandes used his superior grappling skills to put Yoshiro Maeda to sleep in the opening minutes of their non-title bout. Fernandes took Maeda to the mat early, taking the Japanese fighter's back and working for chokes. The Deep bantamweight champ was able to turn into Fernandes's guard, but quickly found himself locked in a triangle choke. Maeda, refusing to tap, fell unconscious on top of Fernandes and Yuji Shimada called a stop to the fight at only 1:46 of the opening round.

In their middleweight match-up, Melvin Manhoef made quick work of Denis Kang, blasting him with a huge knee to the gut that sent the UFC vet face first into the mat. Manhoef threw in a few punches for good measure before referee Kenichi Serizawa stepped in to stop the bout only 50 seconds into the first round.

Despite controlling Hayato Sakurai for the better part of the two rounds, Phil Baroni found himself on the losing end of a unanimous decision after a final round spent tiredly brawling with the former Shooto champion. Baroni pressured Sakurai from top control in the opening rounds, picking his shots from inside the guard. In the final frame, however, Baroni tired and both men spent most of the round trading heavy punches and clinching. Regardless of Baroni's strong showing in the opening rounds, judges Shoji, Adachi and Taoru Totori all scored the bout in favor of Sakurai.

At 145 pounds, former Strikeforce champion Marloes Coenen completely dominated Fiona Muxlow, earning a first round submission win for her efforts. The Dutch submission artist pummeled Muxlow with knees from the clinch, dropping her to the ground quickly. From there Coenen got to work on submission, switching between triangle and armbar attempts before getting the tap off of an armbar at 3:29 of round one.

To open the night, undefeated prospect Will Brooks outpaced Japan’s Satoru Kitaoka, blasting him with up-kicks while defending a heel hook and punching his way to a referee stoppage at 3:47 of the second round.