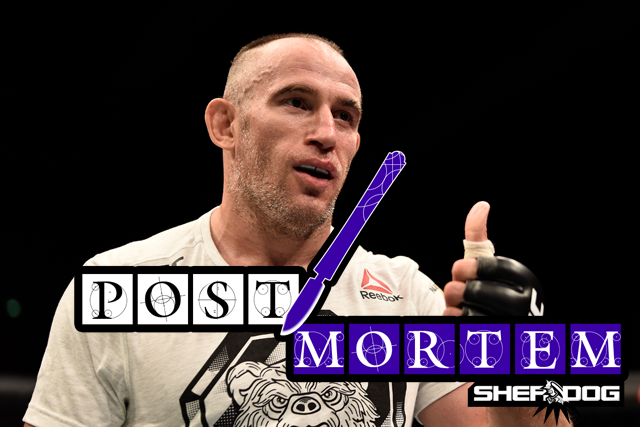 Alexey Oleynik and Mark Hunt squared off in the UFC Fight Night 136 headliner on Saturday in Moscow, as the Ultimate Fighting Championship touched down in Russia for the first time. The heavyweights brought contrasting styles to their encounter, Hunt as a world-class kickboxer and Oleynik as a sublime grappler. It made for a quick but unforgettable main event.

The match began with Oleynik wading forward, looking to tie up the 2001 K-1 World Grand Prix winner and drag him to the mat. Hunt did well to stick to the outside and land hard, thunderous leg kicks that had Oleynik’s leg swollen and discolored but the middle of the first round, the submission specialist beginning to hobble. Hunt connected with a signature overhand right that Oleynik somehow ate without pause. In the midst of a chaotic round, Oleynik seemed to wobble Hunt with a shovel left hook and took the opportunity to scramble to the Kiwi’s back and pull him to the ground. From there, it did not take “The Boa Constrictor” long to find the rear-naked choke and prompt the tapout.

Afterward, Oleynik took time to soak in the cheers of the hometown crowd. He graciously thanked Hunt for accepting the bout as a short-notice replacement for Fabricio Werdum, who was removed from the event after failing a United States Anti-Doping Association test. Given the manner in which the fight concluded, Oleynik indicated an interest in competing again as soon as possible and against a Top 5-ranked heavyweight.


Jan Blachowicz and Nikita Krylov were pegged for the UFC Fight Night 136 co-main event and delivered a memorable battle. Entering the fight, Blachowicz was looking to extend his winning streak to four fights. Krylov, on the other hand, was beginning of his second stint with the promotion -- he opted not to re-sign with the UFC in 2016 -- following a four-fight tear on the regional circuit in Europe. At fight’s end, Blachowicz came out on top and threw his name into the hat of possible contenders for the UFC light heavyweight champion.

Unsurprisingly, Krylov opted to lead the dance in the opening minutes of the first round. He backed up Blachowicz with a pair of chopping leg kicks and a right hand down the middle before taking down his Polish counterpart and looking to land ground-and-pound. Blachowicz postured for an armbar but could not finish the submission. Out of nowhere, Blachowicz showed off his impressive strength, reversed position on Krylov and managed to ride out the round in dominant position. As Round 2 started, Blachowicz initiated a grappling exchange, grabbed the Ukrainian in a waistlock and dragged him to the mat, where he looked to bully Krylov while showing off an obvious strength advantage. By mid-round, Krylov rolled to his back and Blachowicz immediately began fishing for a rear-naked choke. He then switched to an arm-triangle choke in the middle of the sequence and forced “The Miner” to surrender.

During his post-fight interview, Blachowicz called for a title shot. He urged reigning division champion Daniel Cormier to “do something” with his belt and not sit on it until retirement, throwing his name in the hat of potential contenders for the light heavyweight title.


Unbeaten Russian welterweight Alexey Kunchenko took on longtime Octagon veteran Thiago Alves in a featured attraction at 170 pounds. Kunchenko entered his promotional debut with an 18-0 record, while Alves was on the rebound from a knockout defeat to Curtis Millender -- his first stoppage loss since 2015. A feeling-out process ensued, as the two welterweights chopped at each other with leg kicks. Alves stuck to the outside, with Kunchenko pressing forward, but neither fighter looked to take many risks in the first round.

The remainder of the fight played out with the tact of two chess masters on display. Alves remained steadfast with his approach of circling the outside and looking to counter off of Kunchenko’s aggression and willingness to press forward. However, Kunchenko took advantage of Alves allowing him to lead the dance and teed off with fast and precise boxing combinations that ultimately led to his pulling ahead on the scorecards and earning a unanimous decision.

Afterward, Kunchenko opted to call for a fight with fan favorite Donald Cerrone, who will lock horns with Mike Perry at UFC Fight Night 139 on Nov. 10.


Shamil Abdurakhimov beat Andrei Arlovski by unanimous decision in their heavyweight showcase. Abdurakhimov used crisp, clean striking and good takedown defense to outpoint Arlovski across three rounds. It was his second straight victory … Khalid Murtazaliev defeated C.B. Dollaway via second-round technical knockout. In the firs round, Murtazaliev hurt Dollaway with a crushing kick to the liver, sapping the energy from “The Doberman.” It appeared to play a major factor in what happened in the middle stanza, where Dollaway ceded position and allowed his adversary to pound away until it was over … Petr Yan defeated late-notice replacement Jin Soo Son via unanimous decision to move to 2-0 inside of the UFC. Yan teed off with a plethora of strikes throughout all three rounds, but Son showed off an excellent chin and never faded -- a fact which led to one of the most entertaining fights on the card. Afterward, Yan called for a showdown with John Lineker at UFC Fight Night 142 in December … Rustam Khabilov defeated Kajan Johnson by split decision in a hotly contested bout in which Khabilov had difficulty dragging Johnson to the ground. Johnson landed good strikes throughout all three rounds, but Khabilov managed to tie up the Canadian and bring him into grappling range enough to eke out a decision … Mairbek Taisumov was awarded a unanimous decision over Desmond Green in an undercard scrap for which Taisumov weighed in five pounds heavy. Taisumov stifled Green’s grappling attack and teed off with pinpoint boxing combinations that paved the way for his sixth straight win.