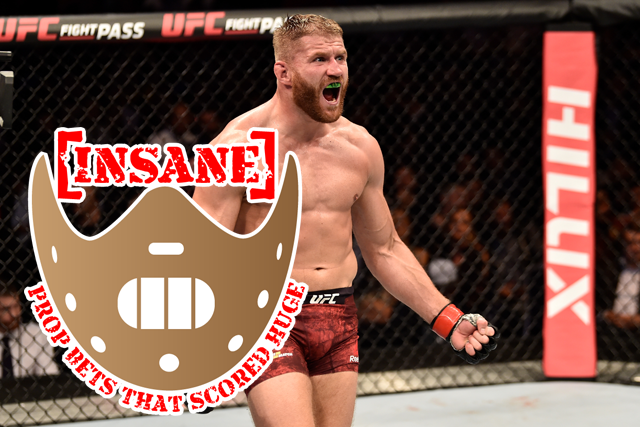 Another Ultimate Fighting Championship event meant another chance for some insane prop bets to score big for bettors who took a chance on them. There’s always some hidden value to be found for those willing to dig deep into the odds, and anyone who put some cash on the following props was rewarded with some great payouts. Here are five of the most insane prop bets to cash at UFC Fight Night 136 on Saturday in Moscow:


The co-headliner featured an incredible finish from Blachowicz, who submitted Nikita Krylov in the second round with an arm-triangle choke. Blachowicz came to the UFC as a striker, but he has rounded out his game and finished two of his last four fights by submission. With Krylov having lost four times previously by submission, the prop on Blachowicz winning by submission was a strong play, and it cashed out at healthy +634 odds.


Perhaps the most devastating finish on the entire card came courtesy of Murtazaliev, who beat C.B. Dollaway to a pulp in a second-round technical knockout. The fight was not without controversy, however, as referee Herb Dean allowed Dollaway to take far too much punishment before a less-than-merciful stoppage between rounds. The prop on Murtazaliev to win in the second round scored at +425 for those who saw the fight going this way.


Johnson put together a tidy performance in his middleweight debut, as he took down Adam Yandiev and beat him up on the ground before eventually submitting him with an arm-triangle choke from half guard in the second round. Johnson was a big favorite to win -- it was not surprising that he registered the victory or even that he authored a finish -- but calling the exact round was the most profitable way to bet this fight. Those who pegged the undefeated MMA Lab representative to win in the second round got a prop that hit at +450.


Because there were so many mismatches that featured lopsided odds, there were not a ton of insane prop bets that scored when compared to UFC 228, but one interesting prop that did cash was the Johnson +3 ½ points handicap. What Johnson backers had to do to win this bet was hope the total scorecards were within three and a half points at the end of his fight against Rustam Khabilov. That hit when one of the judges scored the fight 29-28 in Johnson’s favor. Although Johnson lost the fight by split decision, he proved once again that he could hang with the majority of his contemporaries. Those who cashed this bet scored nicely at +225.