However we got here, we can now look forward to a Professional Fighters League welterweight final between the only two men to have won the title.

At PFL 7: 2021 Playoffs on Friday, 2018 welterweight champion Magomed Magomedkerimov and his 2019 successor, Ray Cooper III, punched their tickets to the tournament final with relative ease, setting up a rematch three years in the making. Magomedkerimov’s unanimous three-round sweep of Swedish kickboxer Sadibou Sy came as no great surprise, as Sy had stepped in on just 10 days’ notice for the injured Joao Zeferino and figured to be at a stylistic disadvantage against the former champ. While the semifinal was not exactly fireworks, especially the ultra-cautious third round, Magomedkerimov left no question as to who was the more effective fighter.

Cooper’s defeat of MacDonald was more of an eye opener, not only because of the ease with which the Hawaiian handled a man who had been a 2-to-1 favorite as late as the middle of fight week, but the specifics of how he did it. Count me among those who had been harping all week about how Cooper’s “just scrap” vibe undersold his well-rounded skill set, but even so, if you told me that Cooper was going to beat the “Red King” with ease, I would have guessed that he landed a couple of hard early shots that either put MacDonald away, or took him out of the fight mentally. Instead, we were treated to Cooper putting on a mini-takedown clinic on the Canadian, forcing him into perilous situations on the ground and looking close to a finish as the first round expired. Against a man in MacDonald who was barely two years removed from fearlessly spending five rounds on the ground with Neiman Gracie, it was a stunning performance.

It was also precisely the kind of performance, at the precise time, to make the Magomedkerimov-Cooper welterweight final just a bit more interesting. While they are the only two champs in the history of the division, it’s worth noting that Magomedkerimov won his title by beating Cooper, while Cooper won his while Magomedkerimov was injured and unable to enter the playoffs. Their first meeting, in the 2018 finals on New Year’s Eve of that year, spoiled Cooper’s breakthrough year and showed him to be severely outclassed on the ground, as well as having difficulty navigating the Dagestani’s much longer reach. As a sign of Cooper’s ongoing evolution, his win over MacDonald, which involved strong wrestling, positional grappling and a notable absence of charging into the pocket with wild hooks, was just about ideal. Magomedkerimov is still likely to be a strong favorite going into the finals in October — he’s undefeated under the PFL banner and may have lost only one round across those 10 fights — but it’s a matchup between two of PFL’s best fighters, and may end up being the best fight in the entire finals. 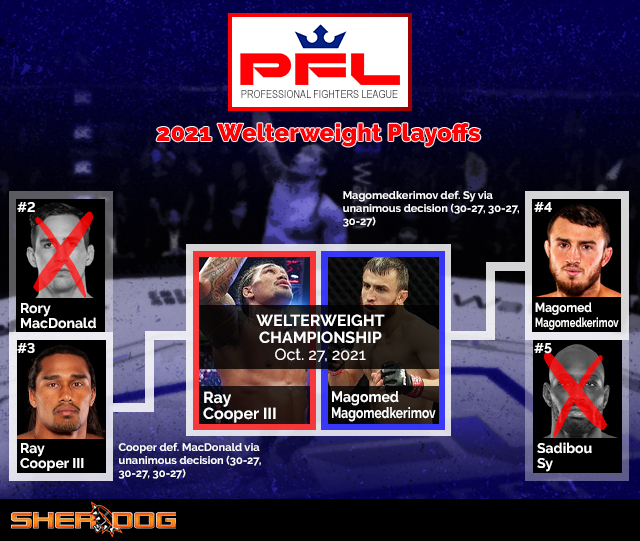