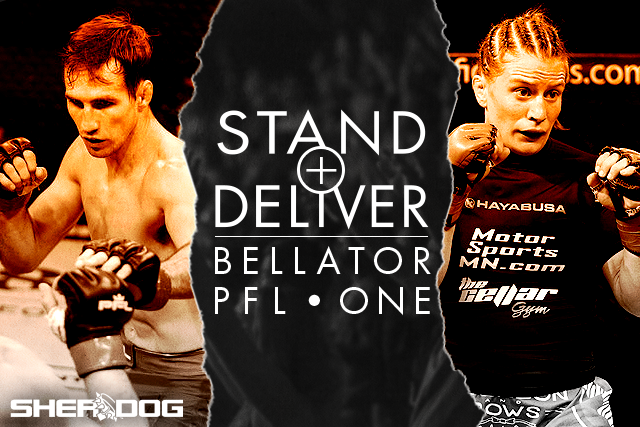 This weekend is one of the increasingly rare ones without an Ultimate Fighting Championship offering of any kind, but that certainly doesn’t mean that there are no high-stakes mixed martial arts contests going on. Bellator MMA, Professional Fighters League and One Championship are all in action, and in fact have made the interesting choice not to fill the vacuum left by the UFC-free Saturday, but to go head-to-head-to-head on Friday, though the time difference will actually place One Championship: Battleground 2 in the morning in North America.

More than mere quantity, however, the trio of promotions is serving up quality, in the form of matchups that are highly relevant to their own divisions, as well as to the sport in general. Look no further than Bellator 264 headliner Gegard Mousasi, who will seek to cement himself as the greatest middleweight champion in Bellator history while continuing to pad one of the most underrated career résumés of his era. Elsewhere, prospects, contenders and highly-touted newcomers are set to enter the cage in Connecticut, Florida and Singapore, with the weight of expectations on their shoulders — some more than others. Here are three fighters under just a little extra pressure to stand and deliver at Bellator 264, One: Battleground 2 and PFL 7: 2021 Playoffs.


MacDonald’s split-decision loss to Gleison Tibau in June was a rotten cherry on top of the extremely unpalatable sundae that has been PFL’s 2021 season. As the promotion’s big-name, big-ticket free agent acquisitions have fizzled out miserably, the “Red King” actually looks like a success story by comparison; where Anthony Pettis lost twice and was eliminated from the playoffs, and Fabricio Werdum took his ball and went home, MacDonald was jobbed by a lousy judges’ decision and, more importantly, made it to the tournament and is still alive for that $1 million prize. He is almost certainly PFL’s biggest remaining star aside from Kayla Harrison, and a slight favorite over upcoming foe Ray Cooper III on the betting books.

Now it remains to be seen whether he can be the one free agent signing who justifies the PFL’s decision. There’s no guarantee that MacDonald waltzes to the title even if he gets by Cooper on Friday — while Harrison and MacDonald are PFL’s most famous fighters, Magomed Magomedkerimov might just be its best — but woe unto the “Red King” if he overlooks the Hawaiian, underestimates him or turns in one of the oddly flat and uninvolved-looking performances that have dogged him over the past few years. Cooper’s reputation as a “just scrap” knockout artist, while partly true, sells his well-rounded skill set very short, and he has traditionally thrived in these playoffs.


Reigning Invicta FC featherweight champ Sorenson was a great get for Bellator, and her debut this Friday against fellow promotional newcomer Roberta Samad is about as much of an all-or nothing proposition as you’ll find this weekend. Put simply, in a division starved for new contenders who haven’t yet faced Cristiane Justino, if “Bam” wins convincingly, she might well be fighting for a title next. If she loses, she gets thrown into gen pop, probably needs to win two fights over dangerous featherweights like Julia Budd and Arlene Blencowe to earn her way back and there’s no guarantee she gets another shot within the next year, if ever. For the 35-year-old Sorenson, that’s a major setback. Former PFL lightweight Samad is big and powerful, but not nearly as skilled or battle-tested as Sorenson. The time is now.


Like Sorenson, Zhang will be making his promotional debut in a winnable fight that has the potential to vault him directly into the title picture of his new division. Zhang’s stint on “The Ultimate Fighter: China” and not-as-bad-as-it-looked-on-paper UFC run feel so long ago that it’s a bit surprising to see that Zhang is only 31. After his release from the UFC, the Inner Mongolian signed with Kunlun Fight, embarked on a fight schedule that would put holes in Donald Cerrone’s cowboy boots, and racked up a record that is short on decent names, but long on quick knockouts. It was good enough to attract the attention of Singapore’s finest, and Zhang now has a nearly perfect debut opponent in Eduard Folayang. “Landslide” is perhaps the ultimate Team Lakay guy, a whirlwind of wushu-influenced striking and aggression who was skilled and well-rounded enough to become a two-time One lightweight champ.

Those title days are in the past, however, as Folayang is on a brutal 1-5 run dating back nearly three years. The 37-year-old remains game and generally entertaining, but this should be Zhang’s fight to win as the younger, fresher, busier fighter. If Zhang wins, Folayang’s name value remains high with the One faithful, and Zhang might have a clear shot at the lightweight title held by Christian Lee, who has fought seemingly everyone in the division at least once. Like Sorenson, if Zhang fumbles, he will surely get more chances, but will have to deal with the likes of Timofey Nastyukhin and Iuri Lapicus before he gets back into the conversation. Take the shortcut.
« Previous Next »