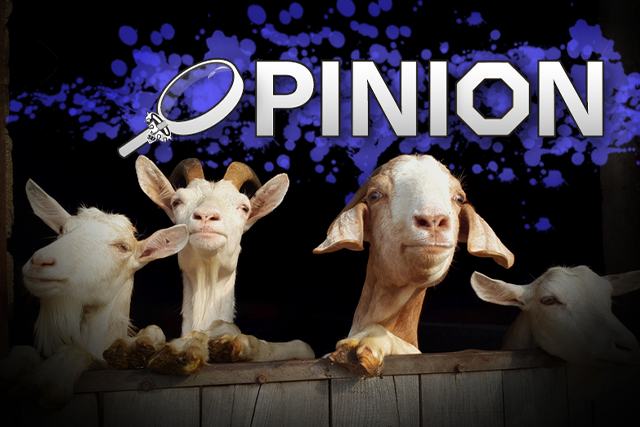 Writing a weekly column about mixed martial arts, I get inspiration from a wide variety of sources. One of the more unusual is from a reader's comment on last week's piece. Taking issue with me calling A.J. McKee a possible future GOAT, or greatest of all time, a pseudonymous commenter responded with a dismissive “Lol. Greatest of all time? Sure.”

On the face of it, that comment wasn't very informative or interesting, certainly nothing to pen an article about. And yet, it got me thinking. To that fan, the idea of calling McKee, then 17-0 and about to face Patricio Freire for the Bellator MMA featherweight championship, was patently ridiculous. But what about the fighters commonly discussed as the greatest of all time? If that hypothetical reader and others like him could go back to when those fighters were 26, as McKee is today, would they consider the prospect of them being future GOATs equally absurd? Since I've been following MMA closely since the early 2000s, I remember when fighters like Anderson Silva, Georges St. Pierre, and Fedor Emelianenko were that age, and the popular fan perception of them. And thus, the idea for this article was born.


The French-Canadian legend's 26th year was a significant one in terms of his legacy. St. Pierre lost the UFC welterweight belt to Matt Serra a month before his 26th birthday in a shock upset. To be fair, the magnitude of that upset is severely overrated nowadays, partly due to hindsight bias, with St. Pierre's greatness in mind. In reality, it's not even close to the biggest upset in terms of UFC championship bouts. But while it may have “only” been a top three upset in a championship fight as opposed to the biggest one, it confirmed one of St. Pierre's weaknesses. While his striking was good, especially for that era, it wasn't on the level of the best fighters, having been soundly beaten up in the stand-up by a smaller, shorter B.J. Penn, and then knocked out by the smaller, shorter Serra, who had never been known for his hands.

To be sure, St. Pierre was a highly beloved, respected martial artist even then, and he did a lot to shut up the doubters by going 3-0 in the year following his 26th birthday. First, he surprised everyone by out-wrestling former NCAA Division I wrestling champion Josh Koscheck, an unprecedented achievement for a martial artist with no wrestling background prior to getting into MMA. To be fair, that match was closer than most people recall. St. Pierre won a competitive 29-28 decision, having lost the first round, and didn't especially hurt Koscheck at any point.

The same wasn't true of St. Pierre's next fight at 26, his rubber match against fellow legend Matt Hughes. That bout was an absolutely one-sided, vicious beating, with St. Pierre not only thrashing Hughes in the striking, but even dominating him in the grappling, finishing with an armbar late in Round 2, poetic justice after Hughes had beaten the French-Canadian with the same submission in their first encounter.

Lastly, St. Pierre won back his welterweight title by stopping Serra with ground-and-pound in Round 2. St. Pierre took the safest approach, refusing to strike with Serra and simply taking him down and mauling him.

At the end of his 26th year, St. Pierre was considered one of the best fighters in the sport and proved he was an even greater grappler than anyone had suspected. However, skepticism remained, as his striking had been badly exploited. Notably, a 27 year-old St. Pierre would only be a small favorite in the rematch against Penn despite his significant size and wrestling advantage.

Would fans have found it ridiculous to call him a future GOAT at 26? Maybe, maybe not. Again, no one doubted St. Pierre was great even then, but he was far from flawless, with a relative striking weakness at the highest echelons of MMA.


Silva was a relative unknown in the MMA world when he turned 26. At the age of 25, Silva had been utterly dominated by Luiz Azeredo, a decent but unexceptional fighter, who had taken him down at will and thrashed him from the top. Silva's big breakthrough came in Shooto when he was 26, notching a decision victory over previously unbeaten legend Hayato Sakurai.

On the one hand, Silva showed absolutely fantastic striking, triply so for that era, as well as vastly improved takedown defense and BJJ compared to when he had first debuted. It was the first sign of his future greatness in MMA. On the other hand, Sakurai was a tiny welterweight, even back then, standing 5-foot-7 and barely cutting weight, and he still repeatedly got Silva down and put him on his back. Fans understandably thought that bigger, better grapplers at those weights would dominate Silva.

Amusingly, after the Sakurai victory and a further triumph over Roan Carneiro, who turned out to be a good fighter but was only 0-1 when Silva faced him, the 26 year-old Silva was slated to face Matt Hughes in the UFC before signing with Pride Fighting Championships. Honestly, at that time, Hughes would have utterly smashed “The Spider,” and I doubt many fans would have believed differently.

Cheating a little bit, we can look at Anderson Silva's career even into his later 20s. At 28, he was submitted via triangle choke by Daiju Takase, a very limited Japanese fighter who had almost twice as many losses (7) as wins (4). This was actually a much bigger upset than GSP losing to Serra, as Silva was an astounding -1500 favorite. At the age of 29, Silva was stunned again by Ryo Chonan with a flying scissor hook. Chonan was a pretty good fighter, unlike Takase, but aside from an exotic submission game, there was nothing special about him. Silva was a -300 favorite for that one. Both those losses seemed to reinforce the idea that as tremendously talented a striker as Silva was, he was just too easy to take down or submit.

Would fans have found it ridiculous to call him a future GOAT at 26? Absolutely. His takedown defense and overall grappling was seen as far too deficient for the top fighters at his weight class. And given his submission losses to journeyman Takase and the one-dimensional Chonan in the next few years, it would have been an equally crazy assertion for several years to come. Just think if any well-regarded fighter today in his late 20s were to be submitted by an opponent with a losing record!


Emelianenko had a career year at 26. Entering that age as a Rings champion who beaten legendary 6-foot-11 striker Semmy Schilt in his Pride debut, there were still question marks about the Russian. He was an underdog facing Heath Herring, and that's not so shocking in retrospect. Much like Jon Jones' disqualification against Matt Hamill, Emelianenko's lone loss had an asterisk attached to it, as he suffered a fight-ending cut due to an inadvertent elbow strike by Tsuyoshi Kosaka during a one-night tournament.

Still, while his takedown defense had improved massively, Emelianenko was still prone to being taken down by great wrestlers. Ricardo Arona, for instance, had done so repeatedly in their fight in Rings. Furthermore, Emelinanenko was considered a little small for heavyweight even then at six feet tall and 230 pounds, while Herring, a very skilled top 10 heavyweight of that time, was 6-foot-4 and roughly 250 pounds. Fedor proceeded to dominate Herring, including repeatedly slamming him to the canvas and brutalizing him with ground-and-pound, leaving even Pride commentators Stephen Quadros and Bas Rutten stunned.

Then, as an underdog again, Emelianenko dominated the man generally regarded as the best heavyweight in the world at the time, fellow legend Antonio Rodrigo Nogueira, in one of the greatest performances and fights ever. He would go on to win a classic comeback against tough Kazuyuki Fujita and annihilate Gary Goodridge in a little over a minute en route to going 5-0 as a 26 year-old.

After such a sensational year, and with no real losses on his record, MMA fans largely recognized Emelianenko's greatness, even the ones who believed only the UFC mattered. (Yes, they existed even in 2003.) However, there were concerns about his size. Fans in the early 2000s had recently seen Randy Couture being stopped by two inferior but larger fighters in Ricco Rodriguez and Josh Barnett. Could he beat someone like then-UFC heavyweight champion Tim Sylvia, a 6-foot-8 goliath who was a perfect 16-0 and utterly immune to any attempts at wrestling him?

Modern readers may laugh now, but that was really the perception back then, even from very intelligent hardcore fans. The aforementioned Rodriguez was himself a large, tremendously talented grappler. He had won a gold medal at ADCC, taken Couture down and pounded him out, and thoroughly out-wrestled Nogueira in Pride, in a fight whose decision is still debated today. And yet, he could do nothing against Sylvia, who stuffed his takedown attempts, slammed him out of an armbar try, and then knocked him out cold in the first round. Many saw Sylvia as the new breed of heavyweight.

Even in his own organization, many wondered if Mirko Filipovic would eventually defeat Emelianenko. Fedor's grappling was excellent, but his takedowns weren't overwhelming, and his striking was seen as very good, but certainly not on the level of an elite K-1 talent like “Cro Cop.”

Would fans have found it ridiculous to call him a future GOAT at 26? Some certainly would, and even those who didn't would admit they had concerns about his size as well as how he matched against some of the other elite heavyweights of his day.

Conclusions: While they were considered superbly talented and in two cases were already world champions, none of these three greats possessed perfect records nor were they flawless in terms of skills at 26 years old. There was a lot of valid skepticism towards them, and all had fights where their weaknesses were exposed and exploited, to varying degrees.

The most startling of these was Silva, who would have been laughed at as any kind of future all-time legend all the way into his late 20s. It's a good reminder for all of us to keep open minds and not be too quick to write off mixed martial artists, not only as future contenders or champions, but even as GOATs.