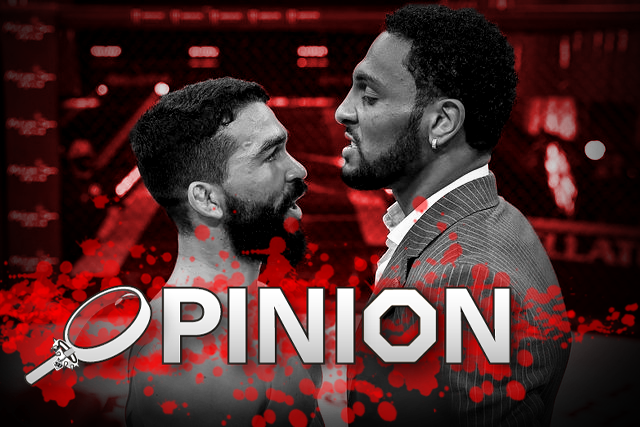 Next Saturday features a mixed martial arts showdown I'm looking forward to more than any fight so far in 2021. More than either of the Conor McGregor vs. Dustin Poirier battles, and more than the rematch between Stipe Miocic and Francis Ngannou. A fight between two warriors whose combination of elite skill, potential for explosive fireworks, and fascinating, unique personalities is unrivaled by any of those contests. I'm writing, of course, about Sean Strickland versus Uriah Hall. Just kidding. That's a weak, underwhelming main event even in an era of weak, underwhelming UFC cards.

Rather, I'm referring to the Bellator 263 headliner between Patricio Freire and A.J. McKee, with the Bellator Featherweight Grand Prix title as well as Freire’s lineal belt on the line.

First, let's look at the champion, “Patricio Pitbull.” Despite being disgustingly, consistently underrated simply because he doesn't fight in the Ultimate Fighting Championship, he is one of the greatest fighters in MMA history. Ironically, some fans are finally starting to understand that, thanks to former rival Michael Chandler's success in the UFC. Chandler, who took half a round to demolish a Dan Hooker who was beating up and barely lost to Dustin Poirier a fight earlier, and was then very close to knocking out Charles Oliveira to become UFC lightweight champion, was himself starched in a mere minute by Freire, without even landing a single punch. And Freire shellacked Chandler despite being an undersized featherweight who is downright tiny at lightweight. He's simply that good.

Freire holds a stellar record of 32-4 despite turning pro as a 16-year-old and fighting competitively for more than half his life, with a slew of victories over tough, quality opposition. However, the record is even better than it appears at first glance. Two of his losses were split decisions early in his career to excellent opponents, Joe Warren and Pat Curran, the latter of which he avenged. Another loss was via decision to Daniel Straus, an outstanding fighter before he suffered a horrendous motorcycle accident. However, Freire defeated Straus not once or even twice, but three times, twice by stoppage. Lastly, Freire suffered a leg injury while fighting the much larger former UFC lightweight champion Benson Henderson. Given that Freire's older brother Patricky, a good fighter but nowhere near the level of his sibling, soundly defeated Henderson a year later, one crazy judge's scorecard aside, this was a lucky break for the former UFC champ. That loss occurred back in 2016. That injury aside, Freire has never been finished, and he has been undefeated since then.

Incredibly, in those last five years “Pitbull,” now 34 years old, has improved significantly, becoming sharper and more precise with his blows while bolstering his defense. Freire has a highly unique fighting skill, with a stance that is a mixture of traditional martial arts and boxing. Standing only 5-foot-6, with a reach of about 66 inches, he patiently bides his time, waits for an opening and then explodes forward. He has every strike you could want, with a devastating, gorgeous, fast right cross, a tremendous overhand right, powerful hooks, and punishing kicks, especially to the body. In terms of grappling, there are those at featherweight who can neutralize the Brazilian, but no one can surpass him. Freire is a very good wrestler, with a variety of takedowns from single-legs to inside trips, with outstanding jiu-jitsu. Despite his fearsome striking, he has one more victory by submission (12) than by knockout or technical knockout (11), thanks in part to one of the tightest, deadliest guillotine chokes in the sport.

On top of all that, “Pitbull” has excellent cardio and is one of the smartest fighters I've ever seen, maximizing his skills to their absolute limit and always looking for an opening and opportunity. He is at his very best in a close fight coming down to the wire or when he faces adversity. He has no weaknesses, and embodies everything that an all-time MMA legend should be.

For a long time, ignorant fans dismissed Pitbull simply for fighting in Bellator and being short, even trash-talking him on Twitter a few years ago when Freire stated his desire to fight then-UFC champion Max Holloway. These accounts claimed the Hawaiian dynamo would beat Freire with one hand tied behind his back, as there was simply no way a 5-foot-6 fighter could defeat the long, rangy Holloway.

Naturally, I doubt these fools ever apologized to Pitbull when Holloway then lost twice to a 5-foot-6 fighter by the name of Alexander Volkanovski. And as much as I respect Volkanovski, a tremendous, well-rounded champion in his own right, he isn't as good as Freire.

That constant disrespect, in turn, has fueled Pitbull's determination, which is part of his personality. As I noted, the guy is incredibly intelligent. When he talks about MMA, he has deep, interesting insight one rarely finds among even the best analysts or coaches. Unsurprisingly, he already runs a gym, Pitbull Brothers, which has spawned many quality fighters and prospects, and recently helped train Paulo Costa after his loss to Israel Adesanya. I wouldn't be surprised if after retiring, Freire became a leading trainer in Brazil. Paired with such a keen mind, “Pitbull” is a tough, macho martial artist with a chip on both shoulders. There are no fun and games with him when it comes to fighting. He seeks to utterly smash his opponent and prove doubters wrong every time he steps into a cage.

And yet, as great as he is, “Pitbull” might have met his match with McKee. McKee is a real, flesh-and-blood fighter straight out of an anime series. You couldn't write a more perfect young phenom. To begin with, his father Antonio McKee was a very good fighter who never quite hit the big time. Despite having an excellent record and several big-name wins, the elder McKee didn't get a crack at the UFC until he was 40 years old. After a split decision loss to Jacob Volkmann, a fighter seemingly uniquely designed to counter the elder McKee, he was cut. Whether this lack of opportunity was due to McKee's grinding wrestling style — it's true he had few finishes in his career, with only nine stoppages in 30 wins — or, as McKee claims, politics, he exited the sport without ever becoming a major star. However, the elder McKee vowed matters would be different for his son. Since birth, he has trained A.J. to become a champion, the perfect fighter.

While many such parental attempts have met with failure, the younger McKee not only met all those lofty expectations, but far exceeded them. He is a perfect 17-0, 12 of those by stoppage. He has never even come close to defeat. No one can touch him. Whenever McKee has stepped up to his toughest opponent yet, he has ended up destroying him in a way few, if any could have imagined.

When he fought former Bellator featherweight champion Pat Curran in 2019, Curran was 31 years old and on a three-fight winning streak against very good opponents, including Emmanuel Sanchez and Georgi Karakhanyan. McKee proceeded to batter him from pillar to post for 15 minutes, showing a massive superiority in fighting ability.

One match later, McKee faced the well-rounded, solid Karakhanyan, who had only been stopped twice in his long career, once via injury after 10 minutes, and once by TKO early in Round 3 in 2011 to a certain “Patricio Pitbull.” The 24-year-old, however, required just eight seconds to render him unconscious.

Facing Darrion Caldwell in the semifinals of the Bellator Featherweight Grand Prix in late 2020, there were many questions about McKee. Caldwell is one of the best wrestlers in the sport, a NCAA Division I National Champion at 149 pounds as well as a former Bellator bantamweight champion who had looked better than ever at 145 pounds, dominating and submitting the previously unbeaten Adam Borics. Few would have blamed McKee too much had he finally stumbled here. Instead, the young prince of MMA proceeded to tap Caldwell in about a minute with a unique submission few had ever seen before, which also happened to win Sherdog's “Submission of the Year.”

Despite the lack of respect given to fighters outside the UFC, McKee was considered far and away the best fighter under 25 in a list that ESPN published in 2019, released before his last two wins, including the one over Caldwell.

In terms of fighting ability, McKee is one of the best strikers in the sport, with a dizzying combination of power, speed, precision, and length. He has a wonderful jab and thunderous left cross with legitimate one-punch knockout power. Being a southpaw, he is able to take even better advantage of his brutal kicks to the legs, body, and head of an opponent. There are certainly comparisons to a featherweight version of Adesanya here, although in some regards Adesanya is better, and in some ways McKee is superior.

The major difference is that McKee is also a superlative grappler. He is a good, but not great wrestler, and can be taken down, as Caldwell proved. Once on the floor, however, his insane athleticism, length and speed make him a lethal submission threat. Not every great MMA grappler necessarily has a decorated wrestling or BJJ background, as Georges St. Pierre and Khabib Nurmagomedov proved, and McKee appears to be yet another example.

Unlike the champion he challenges on Saturday, McKee is exceptionally tall and long for featherweight, standing 5-foot-10 with a surreal 73.5-inch reach. For comparison's sake, Holloway, who was supposedly too long for “Pitbull,” only has a 69-inch reach. There are no limits for McKee. He improves by leaps and bounds every time out, and despite the dizzying expectations, still manages to shock and stun MMA fans. I wouldn't at all be surprised if he is discussed as the greatest fighter of all time when his career ends. He has that potential.

In terms of personality, McKee offers another amusing contrast to Freire. He is less of a dead-serious martial artist and likes to wear fashionable clothes, hype himself up and be more of a brash, bold entertainer. Of course, that shouldn't obscure that he also has a fine mind for the sport and tireless work ethic.

Freire vs. McKee has everything one could hope for in a fight: two superlative fighters of the highest skill level; two unique, different personalities; endless plot lines of young contender vs. older champion, martial artist vs. flashy fighter and sportsman vs. entertainer, and many more. I will be watching with the greatest relish Saturday night, and I recommend every MMA fan do likewise.
« Previous Next »