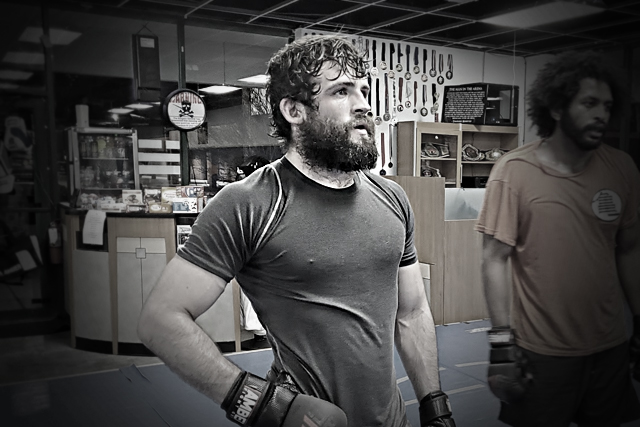 
At American Combative Systems in La Marque, Texas, southeast of Houston, Friday night MMA practice is usually more lightly attended than weeknight sessions. It is a phenomenon familiar to fight gyms of all sizes: In a world where fighting may be just one interest vying for its amateur participants’ time and attention, and a sport in which many professional fighters—even at the highest levels—continue to work full-time jobs, kicking off the weekend in compression shorts and shin guards isn’t always an easy sell.

All of that goes double if the Friday night in question also happens to be Valentine’s Day, which it does.

On this Valentine’s Day evening at ACS, Nico Echeverry is the first one through the door. That isn’t surprising, since he teaches the first class of the evening and since he is less than two weeks out from the next fight of his own, a 160-pound catchweight clash with Derrick Ageday at Fury FC 42 next weekend. We talk as he sets about making sure the gym is clean and ready before the rest of the class rolls in. The first topic is Echeverry’s last outing, a bout against Victor Martinez for the vacant Fury Fighting Championship lightweight belt last August, which ended in disappointment. After likely winning the first round, Echeverry was floored early in the second by a sharp counter right. Martinez pounced as Echeverry sprang back to his feet, but it was all rendered moot in a split second when the referee dove in for a very premature stoppage. I ask him what lessons, if any, he can take away from the abbreviated title fight.

“Keep your hands up! That’s the main thing,” he says with a laugh. “But also, I needed to listen to my coaches. What my coaches told me between rounds was that I needed to stop moving to my left—towards his right hand—and stop throwing my jab as much, because he was throwing his right over my jab. I didn’t listen, either just because of adrenaline or because I thought I’d done really well in the first round and I felt like, ‘I’ve got this.’”

Echeverry confesses that it took some time to get over the frustration of that night, and is also quick to credit his opponent for the telling blow. As he talks about it, I get the distinct impression that the knockdown—the first of his career—was something of a learning experience in itself for the 28-year-old.

“I will fully admit, that was a clean punch,” he says. “The punch you don’t see coming is always the one that hits hardest. It clipped me [and] I didn’t even realize I was knocked down until after I was already kicking him off and standing back up. Pure muscle memory kicked in, but when I got back up and the ref was suddenly there, I was honestly confused more than anything else. Afterwards, for the first five minutes, I was mad. Sad. A bunch of conflicting feelings. I had to put it behind me pretty quickly though, or I’d still be depressed about it.”

That seems like a pretty good cue to move on, myself, so I bring up Ageday, his upcoming opponent. The 3-6 Ageday is a bit of an enigma locally, a prodigious athlete who has shown flashes of brilliance but has hit a rough patch of late. Ageday has lost his last four fights, albeit against some of the very best welterweight talent Texas has to offer, and is likely seeking a new lease on life by dropping in weight. Echeverry reveals something I hadn’t known—he and Ageday had been scheduled to fight last year, but Ageday’s late withdrawal due to injury left Echeverry in need of a fight, which in turn led to his best career win so far: a short-notice destruction of previously unbeaten Steven Jones at LFA 63, with UFC president Dana White in attendance looking for recruits for his eponymous Contender Series. Even in Texas, where everything is bigger, MMA is sometimes a small world. In sizing up his opponent, Echeverry’s recall of specific detail betrays his tape-watching habit.

“He’s got good power,” he explains. “I remember in his first pro fight, he knocked out Craig Grove, and he caught him with a pretty good left hand in the second round. But really, it’s his suplexes. If he takes your back, he’s probably gonna launch you. I’d like to say that’s never going to happen [to me], but at the same time you never know. But I’ve taken as many preventative measures as possible to ensure that, if he does get my back, he won’t be able to throw me like that.”

By the time practice begins, there are seven people present. Even by the standards of an invite-only session at ACS, a gym that has remained deliberately limited in size, that is a lower-than-average figure. That isn’t surprising, though, considering the whole Valentine’s Day thing, and in fact one of the participants dubs the date-less septet the “No Boo Crew,” to general amusement.

While the size of the class isn’t a surprise, its composition is, at least to me. There are several professional fighters—though Echeverry’s usual training partner and cohort in madness, Mikey Patterson, is nowhere to be seen, presumably having fallen victim to Cupid’s arrow tonight—but there’s also a 16-year-old boy and a girl in her early 20s, both of whom have only been training for a few months. I ask ACS head man Drew Ratichek about it later, and he tells me that the invitation to the Friday night sessions is based more on attitude than aptitude.

Fortyish, 6-foot-2, burly and genial, Ratichek exudes a mix of grit and wisdom that perfectly fits his dual background as a high-level BJJ brown belt under Travis Tooke and a former sergeant-at-arms for a well-known motorcycle club. He is going on a decade as the only head coach Echeverry has ever had. Ratichek is here to teach the class after Echeverry’s, normally the province of ACS striking coach Gary Pena. I notice that both sessions are tightly structured, consisting of situations and counters being presented, then fairly short spans in which fighters pair off to practice them as the coach observes and offers correction. Given the modest size of the class—even a full Friday session here is only 15 to 20 fighters—and the quick pace, it’s very hands-on from a coaching standpoint.

“This isn’t a drop-in session or open mat time,” Ratichek declares. “The way I see it, people who come to this gym are paying for instruction. I try to…I’ve never liked the whole ‘make them run laps on gym time’ thing. If you need that, I have strength and conditioning coaches I work with and can refer you to. If you want that…we’ll get you a dog. You can run until you both drop; it’ll be a great coach for you.”

As the final session ends and the team is packing up, I talk to both Echeverry and Ratichek. I’m curious why the fight is being contested at 160 pounds; while Martinez won the Fury lightweight title by beating Echeverry last summer, he was stripped by the promotion months later, fought most recently in Combate Americas in December and may not be long for the regional scene. Since Echeverry’s first shot ended in such controversial fashion, it would seem to make sense to have him fight for the once-again vacant belt. Fighter and coach both shrug. 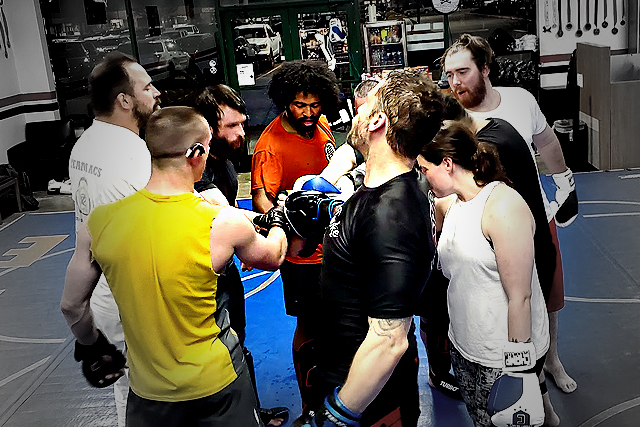 
“The Fury belt isn’t really part of my goals anymore at this point,” Echeverry says. “I want to fight three times before the summer, get three finishes and make it to the UFC or at least the Contender Series.” His tone is unusually solemn for a fighter who is normally a fount of manic hilarity, but perhaps that is to be expected; it is almost a year since Echeverry went all-in, quitting his day job to concentrate on his fight career and supplementing his income by taking a greater role at the gym. In that time, he has had rousing successes, near misses—I never told him this, but at that LFA event last spring, I watched Dana White and Matt Serra enter the arena and take their seats about 10 minutes after Echeverry scored his sensational head kick KO of Jones—and a frustrating setback. He will turn 29 a few weeks after the Ageday fight. If he is going to reach the next level in time to make a run at the best in the world, the time is now.

He and Ratichek talk about their plans, acknowledging that much depends on Echeverry getting through his fights relatively unscathed, starting with this one. They express their confidence that Fury, a tightly run and aggressively expanding promotion that has hosted the majority of Echeverry’s fights so far, will have no problem getting him three fights in the first half of the year. They agree that it’s to Echeverry’s advantage that he’s willing to fight at welterweight as well as lightweight. They also talk about the unglamorous details of making money in MMA. “Today I spent hours texting people who haven’t been to class in a while,” Ratichek says. “Just checking in, seeing if there’s anything they need. Because if they stop coming, in a few months they’ll stop paying for their membership.” For his part, Echeverry is grateful that Fury seems to notice and respect the work he does to sell tickets to his fights—an ever-present reality in virtually every promotion other than the UFC—in spite of not hailing from one of the area’s huge gyms with larger built-in fan bases.

As they talk, I find myself mulling over why I’m here. Why would I make the drive to La Marque—and even by the standards of Greater Houston, where nothing is close, this ain’t close—to spend the evening with a 7-3 fighter at a gym that, while unique in many ways, has no real notoriety at a national level?

The easy answer is that I don’t believe Echeverry’s record reflects how good a fighter he is. This sport has a whole lot of 7-3 men and women slugging it out in regional shows and they are not all created equal, not by a long shot. Echeverry’s three losses include two split decisions, both of which were razor-close and one of which was frankly bad judging, and the miserably early stoppage against Martinez. Meanwhile, all seven of his wins, the last five of which were finishes, have been emphatic.

While that’s the easy answer, and correct as far as it goes, it’s also more than a little self-serving. If I’m being honest, I’m not here to shine a light into dark corners, rail against injustice in mixed martial arts or anything else so noble. I’m here to watch fights, meet people and tell stories. As an example of one of MMA’s most tried-and-true plot arcs, that of a young fighter sacrificing, planning, laying aside other goals and concerns to put everything into a shot at the big time, Echeverry is a good one. I don’t know how his story ends, but I’m interested to find out.

The evening is winding down. Ratichek asks one of the fighters to mop the mats, but Echeverry waves him off and takes the mop himself. Aside from Ratichek and I, who will still be chatting on the sidewalk outside ACS an hour later, he’s the last one to leave.