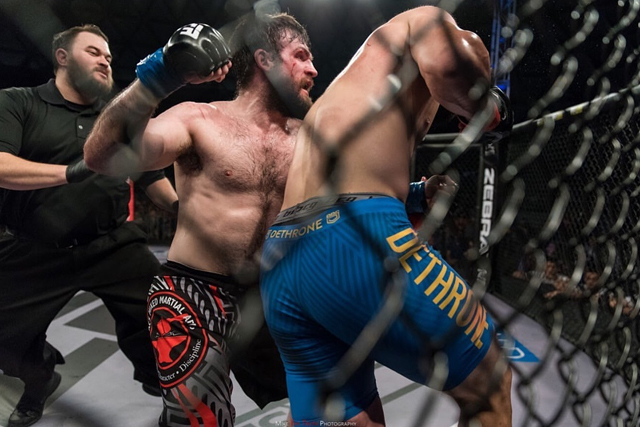 
It would be overstating the case to say that Nico Echeverry was being brought in to lose at LFA 63 on Friday night; after all, at 5-2 he was more experienced than his opponent, Steven Jones. However, with Ultimate Fighting Championship President Dana White in attendance scouting talent for Dana White's Tuesday Night Contender Series, and with Echeverry getting the call on two weeks’ notice to step up to welterweight and take on exactly the kind of undefeated, athletic prospect the Contender Series seems built on in the 3-0 Jones, it might be fair to say the fight was expected to be a showcase for both fighters, but not equally so.

Fortunately, nobody appears to have handed Echeverry a copy of the script. In the most high-profile fight of his career to date, Echeverry handled his visibly larger opponent in impressive fashion. Navigating the taller man’s reach to land clean punches and numerous head kicks, Echeverry likely won the first two rounds before dispatching the fading Jones in the third with a final high kick and flurry of follow-up punches.

Speaking to the 28-year old Houstonian backstage as he was being attended to by the physician, the other side of Echeverry is immediately evident. The man who just won a cage fight in much the same way a terrier takes down a larger dog -- tenacity, superior endurance and surprising power -- turns out to be an intense and sometimes hilarious dynamo of cheerful enthusiasm. He talks rapidly, laughs frequently and embraces his nature as -- in his own words -- a huge nerd. (Case in point: When asked what his skill background was prior to training in MMA, his response was not “wrestling” or “muay Thai” but “math tutoring.”) 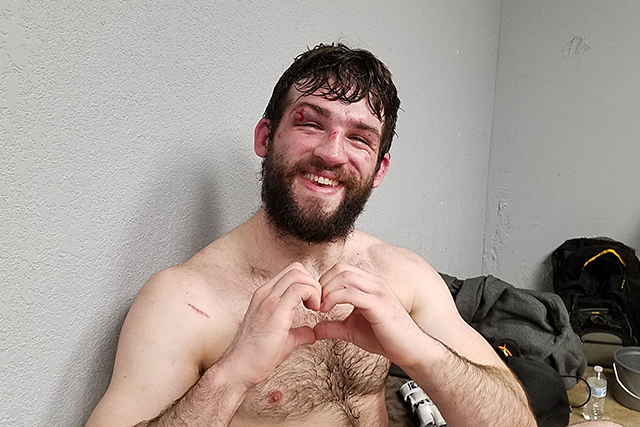 
He was also, understandably, in the mood to celebrate. Sitting on a table with a towel draped over his face as the doctor worked on his black-and-blue right eyelid, the now 6-2 Echeverry was already calling out for the Crown Royal, one hand held out blindly for the bottle, graciously inviting the interviewer to join in a swig. (If only there hadn’t been six fights left to go that night.)

Echeverry is adamant that the step up to 170 pounds was not a big deal. “Steve was a big guy, bigger than what I’m used to,” he said. “But I train with bigger guys, and it just didn’t affect me that much.” Even after Jones was able to shuck off an early takedown attempt, Echeverry claims he wasn’t discouraged. “Every failed takedown attempt isn’t a failure. To me, it’s just, ‘OK, I made him tired a little bit.’ It’s like taking a hammer to a brick wall -- the first hammer strike, maybe nothing happens. Then the next one, there’s a little crack. Third one, there’s another crack. The fourth one, now there’s a hole, and you just keep hammering until that wall comes down. I just kept hammering until he came down, one way or another.”

That attritive approach to strategy sounds like the sign of a fighter who believes he has the better gas tank, and sure enough, Echeverry considers conditioning his trump card. “I feel like I have [cardio] in spades,” he said. “I think I showed that this fight. I have good grappling, really good striking, but if all else fails, I will be able to out-gas you, 100 percent.”

While Echeverry was of course aware the president of the world’s premier mixed martial arts promotion would be at the event, he maintains it was an exciting rather than nerve-wracking notion. The Contender Series has been a pipeline, sending Texan prospects such as Juan Adams, Geoff Neal and Domingo Pilarte to the UFC, but Echeverry claims to be happy for the added attention whether anything comes of it immediately or not.

“It got me excited,” Echeverry exclaimed. “I was like, ‘Dana White will get to see me fight? Aw, this is great! He’ll get to see me, I might get on his radar and maybe he’ll come talk to me.‘ But even if he doesn’t, I know that he got to see what I can do, and that’s all that matters to me.”

Echeverry may not be in a rush to make the jump to the next level, but he is going all in on his burgeoning fight career. He is open to taking more fights at welterweight as well as lightweight, and as of last week, he now devotes his time entirely to training and teaching at American Combative Systems in La Marque, Texas, where he has trained for nearly a decade under head coach Drew Ratichek. He will still make time, however, for the occasional math tutoring session -- for the money, of course, though it will certainly do his nerd cred no harm either.