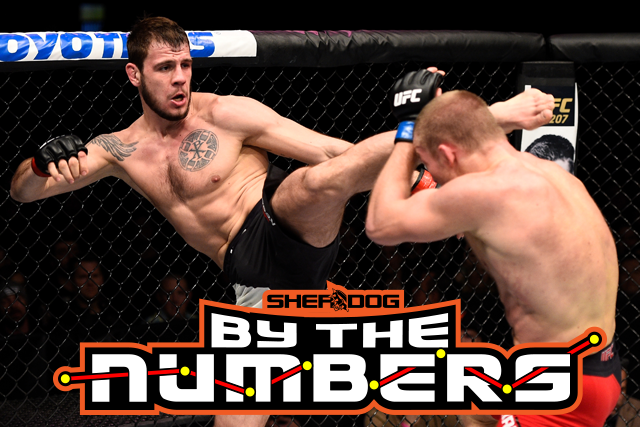 Nikita Krylov has yet to experience going the distance in his 29-fight career.

After a fairly successful Ultimate Fighting Championship stint from 2013 to 2016, he left the organization to the surprise of fans. Now back after a string of impressive finishes outside the Octagon, Krylov is eager to show how lethal the combination of youth and experience is when he faces Polish veteran Jan Blachowicz. Ahead of their UFC Fight Night 136 encounter, here are some of the numbers that have come to define “The Miner.”

10: Years old when he started training in karate, his first taste of combat sports. He was introduced to the art by his father, who was a decorated karateka.

12: Victories without a loss to start his career. He debuted professionally on July 27, 2012 in an event called West Fight 4 where he knocked out Alexander Umrikhin. It was followed by 11 more triumphs, all inside the first round.

4: Takedowns given up to Soa Palelei at UFC 164, per Fightmetric. In this fight, he outstruck the Australian, 45-29, but ended up getting knocked out at 1:34 of the third round. It was also his UFC debut and his first fight outside of Ukraine or Russia.

25: Seconds to knock out Walt Harris at UFC on Fox 10. After the loss to Palelei, he bounced back to score an emphatic knockout 25 seconds after the bell sounded.

2: Divisions fought in. He started as a heavyweight and became the Gladiators FC 2 tournament winner. At UFC 171, he fell prey to Ovince St. Preux’s dreaded Von Flue choke in his light heavyweight debut.

60: Significant strikes against Herman’s 26, according to Fightmetric. Krylov overwhelmed the American with his superior standup, ending the fight with a head kick early in round 2.

9: Fights in the UFC, with a record of 6-3. After a decent run, he decided not to re-sign with the organization, saying he wanted to fight closer to his home country.

2: Rounds to defeat Maldonado by knockout. The win afforded him with the Fight Nights Global light heavyweight championship.

20: First-round finishes. Clearly, Krylov has a knack for ending the fight early, may it be by submission or knockout.

10: Wins by knockout. He has an all-around standup game, having starched opponents by punches, knee and head kick.

14: Victories by submission. He is just as versatile when it comes to the ground, having tapped out adversaries by guillotine choke, rear-naked choke, Von Flue choke, arm triangle, Americana, Achilles lock, armbar and kimura.

26: Years of age. Krylov is an experienced 26-year-old, having fought all over the world. He was born on March 7, 1992 in Krasnyi Luch, Luhansk, Ukraine.