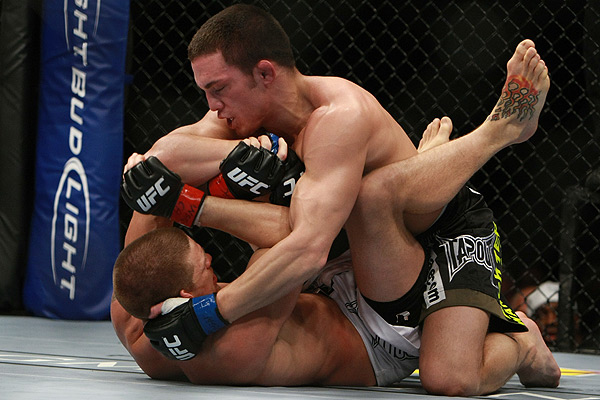 Despite a fresh new format and a solid cast of talent, sagging ratings have plagued the 15th season of “The Ultimate Fighter.” Does that mean people will ignore “The Ultimate Fighter 15” Finale lineup, which is populated by many of the same characters who were featured during the reality show’s debut on the FX network?

Even if you do not care whether Mike Chiesa or Al Iaquinta emerges as the winner of the lightweight tournament, the event still has some interesting non-reality show-related fare to offer, including a key welterweight clash between Jake Ellenberger and Martin Kampmann. Both fighters are looking to move up in an increasingly cutthroat 170-pound division; Ellenberger, in particular, could be on the doorstep of a title shot with a win. Also of note is a clash between talented young featherweights Jonathan Brookins and Charles “Do Bronx” Oliveira.

Here is closer look at the “The Ultimate Fighter 15” Finale, with analysis and picks:

Martin Kampmann File Photo
Kampmann has won two straight.
The Matchup: It would have been interesting to see how Ellenberger would have responded had his most recent bout -- a unanimous decision win over Diego Sanchez in February -- gone to the championship rounds. After convincingly taking the first two frames, Ellenberger looked to be in trouble in the final five minutes, as Sanchez diligently pounded away in hopes of a stoppage that never came. The Nebraskan claims he did not gas in that fight, but there will be no “what ifs” this time around, as this contest is a five-rounder.

Kampmann experienced his own good fortune at UFC on FX 2 in March, when an ill-advised takedown attempt from Thiago Alves allowed him to secure a fight-ending guillotine choke in the third round. “The Hitman” was behind on most scorecards after the first two rounds but demonstrated he was still opportunistic enough to capitalize on an opponent’s mistake.

Ellenberger enters the matchup riding a six-fight winning streak. The Reign MMA representative has lobbied for a rematch with Carlos Condit, the only person to defeat him in the UFC, but the interim welterweight king has opted to wait for Georges St. Pierre to return to health. There is plenty at stake for “The Juggernaut” here, because a loss would knock him down the waiting list of welterweight contenders. Ellenberger has knockout power in his hands and a wrestling base that allows him to play an effective sprawl-and-brawl game. He will use his jab to keep foes at bay, and, when they attempt to close the distance, he can unleash a powerful counter left hook. Ellenberger also has dangerous knees in the clinch, which he used to knock out Jake Shields at UFC Fight Night 25.

Kampmann can use his kickboxing to fight on the outside, but he can also rush the pocket and land powerful punches in close. This strategy failed against Alves, however, and the Dane ate a number of solid hooks and uppercuts for his efforts. Kampmann might do better using his kicks to score points and avoid getting caught from anything serious from Ellenberger, who will undoubtedly be looking to counter his opponent’s mistakes.

If Ellenberger finds himself confounded by Kampmann’s diverse striking arsenal, he can always use his punches to set up a level change and shoot for a takedown. The Omaha native has a strong base and can land powerful shots on the ground without worrying about losing position. Kampmann has solid takedown defense, however, and his active grappling from the bottom could curb some of Ellenberger’s offense from top position.

It has been almost three years since Kampmann was finished by strikes, but Ellenberger has the type of power to put most anyone to sleep. That said, many thought the Dane would get knocked out by Alves, and he managed to absorb plenty of punishment and survive.

The Pick: This fight could come down to conditioning. If Ellenberger does not get the quick finish, will he wear down as he appeared to in the third round against Sanchez? Kampmann is a fighter who can give him a lot of different looks and is capable of mounting offense from distance, in close and on the mat. In the end, this will come down to who can get the better of the action on the feet. Ellenberger is more powerful, but Kampmann lands with more volume and variety. In the end, Ellenberger uses his wrestling to dictate the location of the fight and stops Kampmann with a series of heavy shots in the second round.