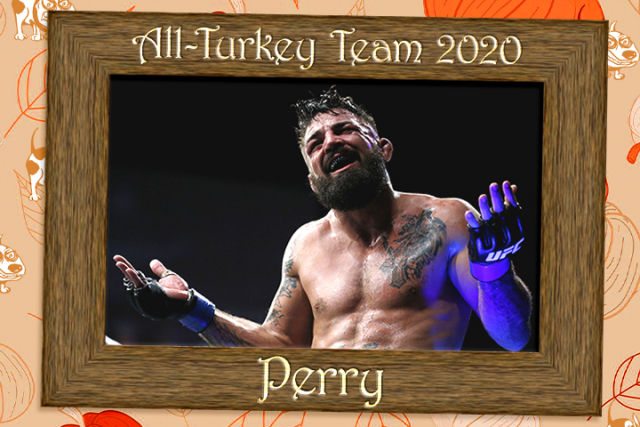 
’Tis that time of year again, folks. While most Americans are sitting around stuffing their faces with turkey, dressing and mashed potatoes and mellowing out to a tryptophan overdose, the staff at Sherdog.com has compiled its All-Turkey Team for 2020. In the past, mixed martial arts has provided us with quite a few questionable characters, and this year has been no exception. The latest group of offenders—or members—delivered what might have been the most eclectic rap sheet yet.


When Perry debuted in the Ultimate Fighting Championship in August 2016, he established almost immediately that his primary function would be comic relief. Sure, it was edgy, transgressive comedy at times, but make no mistake: From the time of his debut, when he made headlines for his knockout of Hyun Gyu Lim amid cornerman Alex Nicholson’s audible racial insults, “Platinum Mike” has been punchline as much as puncher.

Fast forward four years, and the joke has worn thin, replaced increasingly by pathos and accompanied by a slide into competitive irrelevance. A tattoo of his own nickname over his right eyebrow showed up shortly after his debut. His ceiling as a fighter showed up soon afterward, as one-sided losses to Alan Jouban and Santiago Ponzinibbio demonstrated that against quality strikers, even Perry’s proverbial “puncher’s chance” was overstated. His unapologetic use of the N-word in his public life, inexplicably defended by some, lost most of its apologists when he directed it at African-American martial artist and actor Michael Jai White during a social media dustup. Notably, the knockouts—the reason Perry was supposed to be interesting in the first place—have dried up. After scoring impressive KOs in four of his first five Octagon appearances, Perry has not had a finish in the last three years, going 3-6 over that span.

That brings us to 2020, the year in which Perry seems to have completed the transition from worn-out joke to potential tragedy in the making. More than once this year, he has provided moments that make us feel badly for him, even as we laugh and/or shake our heads. Heading into a matchup with Mickey Gall at UFC on ESPN 12 in June, Perry proclaimed that he had no coaches or team and that his new girlfriend, Latory Gonzalez, would be cornering him. Against Gall, a fighter the 2017 version of Perry would have knocked into next week, it was good enough to earn a dominant and much-needed unanimous decision win.

In his post-fight interview with Jon Anik, Perry launched into an incredible rant in which he bemoaned his six-figure tax debt, including the memorable line, “Maybe we work out a contract that says that ‘the taxes [are] paid when ‘Platinum’ is paid.’ Like, when I get paid, that’s it. That’s my money. Don’t give me money if you don’t want me to spend it.” It was impossible not to wonder: Does this person have no adults in his life to help him?

The answer was apparently no. Not two weeks after complaining about his massive debts, he bought Gonzalez a new Toyota 4Runner. Around that same time, video surfaced of Perry in an altercation in a restaurant in Lubbock, Texas, wherein he appeared to punch an elderly man. Perry excused his actions, stating that the man had initiated physical contact, but the UFC nonetheless instructed him to seek professional help for his issues with alcohol and anger. A month later, Gonzalez announced she was pregnant with Perry’s child.

In October, Perry’s ex-wife Danielle Nickerson—who had been a highly visible presence at UFC events and on Perry’s social media for most of his Octagon tenure—gave a lengthy and detailed interview in which she claimed that he had physically abused her on multiple occasions, as recently as February. While those allegations have yet to be addressed by the legal system, they are substantiated by 911 calls and police reports.

On Nov. 12, a week ahead of his fight with Tim Means at UFC 255, Perry—again being coached and cornered only by his girl—made several social media posts directed at Means, asking him how his weight was coming along while Perry ate a hamburger. A few days later, as he realized he was about to miss the welterweight limit badly, Perry’s posts changed completely in tone, as a defensive and frankly self-pitying “Platinum” claimed he felt he was “dying,” mulled retirement and accused his online critics of never having had to cut weight before. By the time the actual weigh-ins rolled around, Perry was back in defiant goofball mode, doing the “dab” on the scale and weighing in at 175.5 pounds, four and a half pounds over the non-championship limit. At this point, an uncharitable writer would point out that Perry, who abandoned traditional coaches and camps in part because he begrudged the 15 percent of his purse they took, was about to cough up twice that much.

On fight night, Means survived a scary first round on the ground—ironically, Perry’s offensive wrestling and top game have always been underrated weapons—to outbox his overweight opponent for the final two frames and win the decision. In his post-fight interview, “The Dirty Bird” thanked Perry for the $27,000 and then talked about what a good place he finds himself in and how happy he is in his personal and professional life. Means’ story is nothing short of inspirational: A self-confessed former methamphetamine addict who once did three years in prison due to a combination of poor choices and bad friends now finds himself a sober family man and a veteran of 20-plus UFC bouts. If Perry—who despite all the ridiculousness is still only 29—aspires to either of those things, he could stand to take some notes.