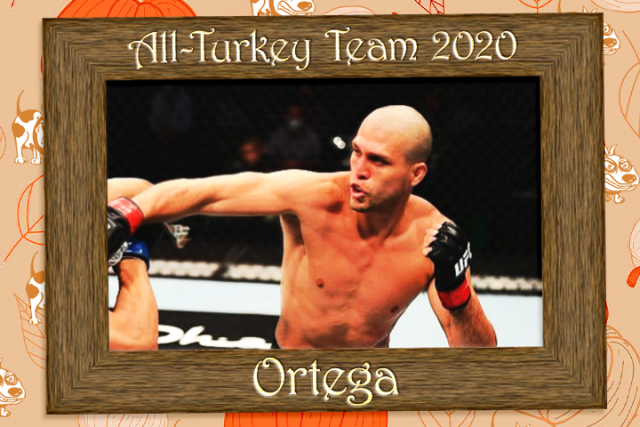 
It’s easy to understand why Ortega might have had some pent-up frustration early in 2020. After all, “T-City” went from being one of the Ultimate Fighting Championship’s fastest-rising stars to not fighting at all in a calendar year following a loss to Max Holloway in a featherweight title bout at UFC 231. Misfortune continued when a knee injury forced Ortega out of a proposed clash with Chan Sung Jung at UFC Fight Night 165 in December 2019.

What did Ortega do in the meantime? The Black House product, who appeared to be the epitome of California cool, engaged in a silly—and briefly physical—feud with rapper Korean rapper Jay Park, who also served as a translator for “The Korean Zombie.” Apparently, Ortega was not pleased that Park translated an interview with Jung in which the featherweight claimed that “T-City” was ducking him.

“When I saw him in Korea, he apologized and said sorry for the trash talk, and I said all good because at least you came at me like a man,” Ortega wrote in a comment on ESPN’s Instagram page. “Now you just a bitch dawg. Jay Park welcome to the fight game don’t be surprised if I slap the s--- out of you when I see you. Having an injury and ducking are [two] different things.”

In his first documented action since the Holloway fight, Ortega allegedly made good on his vow, slapping Park during an altercation in the crowd at UFC 248 while Jung was in the bathroom. Ortega was escorted from the venue, and a police report was filed. Understandably, Ortega’s course of action drew the ire of “The Korean Zombie.”

“You are such a coward for slapping a musician not a fighter,” Jung wrote on Instagram. “If you f------ planned this to fight me and to use my name because people don’t remember your name anymore, then I congratulate you, it worked. I will fight you and I will knock you out and your f------ face will be bloody. Now, your f------ face stays in my mind and I will f--- you up in the cage. I hope you won’t run away from me again.”

Ultimately, cooler heads prevailed and Ortega issued a Twitter apology to Park a couple days later, though it remained unclear if he ever understood that the rapper was merely relaying Jung’s words.

Ortega managed to gain a measure of redemption some seven months later, when he returned to the Octagon to capture a clear-cut unanimous decision over “The Korean Zombie.” The victory likely secured another title shot for Ortega, who was able to move past a truly regrettable incident.

“I was counted out. I understand, you leave the game for two years, you get counted out,” he said. “I’m here to remind everyone. It felt great to have this happen again. Having your hand raised at this level is important. It’s the number one thing.”