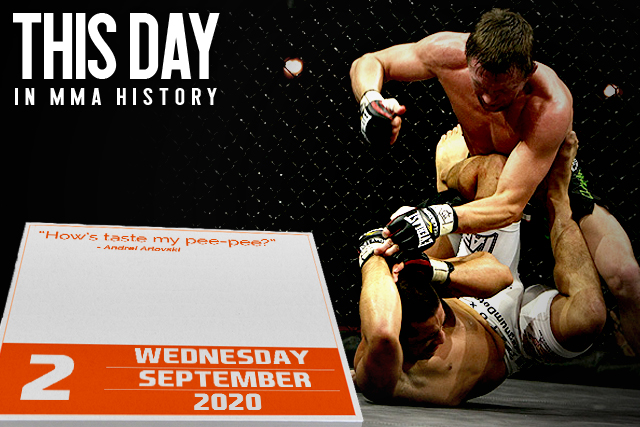 
It is nearly impossible to look at the career of Joe Warren without a measure of grudging respect for the sheer cojones on the man. In one of the all-time great examples of diving straight into the deep end of the pool, Warren—an NCAA Division I All-American and two-time world Greco-Roman wrestling champion—crossed over to MMA at age 32 and made his fighting debut by entering the Dream Featherweight (63 kg) Grand Prix. In the first two rounds, he knocked off former World Extreme Cagefighting champion Chase Beebe and K-1 Hero’s grand prix winner Norifumi Yamamoto, snapping a 14-fight win streak by “Kid” in the process. When he came up against a Top 5 fighter in Bibiano Fernandes in the final, he was armbarred in under a minute due to what can only be described as a white-belt mistake, but that was kind of the point: He was a white belt, and had nonetheless fought his way to the finals in, at worst, the second best featherweight division in the sport at the time.

The following year, Warren signed with Bellator MMA, where he entered the Season 2 featherweight tournament—145-pound Western featherweight, which was more than a full weight class above his wrestling weight—and promptly resumed beating much more experienced fighters. After defeating Georgi Karakhanyan in the semifinals, Warren met 14-0 future two-division champ Patricio Freire in the finals and handed “Pitbull” his first career loss in a narrow split decision. That win earned Warren the right to face inaugural champ Joe Soto for the title, which was scheduled for Sept. 2, 2010 at Bellator 27.

For a round or so on that night in San Antonio, Soto looked every bit the champion. A standout wrestler himself, Soto resisted Warren’s takedown attempts and punished him on the feet for a lopsided five minutes. As an obvious 10-8 first round expired, Soto, clearly brimming with confidence, taunted the challenger.

The second round was a completely different story. Warren dropped Soto with a huge right hand in the opening seconds. After a flurry of ground-and-pound, Warren let the champion up, only to level him with a massive knee to the face. It was all over in 33 seconds and Warren was the new Bellator featherweight champion.
« Previous Next »