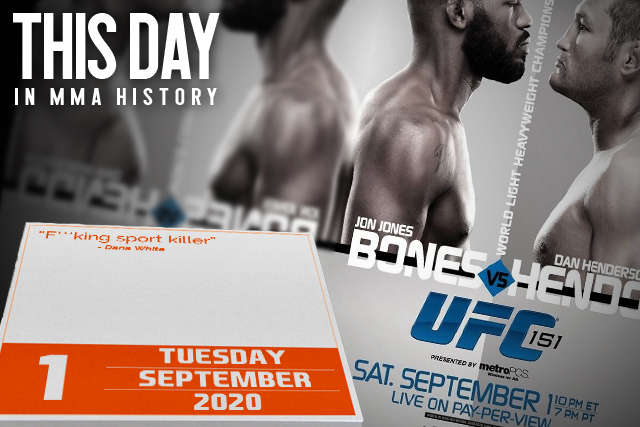 
In August of 2012, two weeks out from UFC 151, Jon Jones’ fourth light heavyweight title defense looked extremely routine. In the year-plus since he had wrested the belt from Mauricio Rua at UFC 128, he had defended it three times in utterly dominant fashion. The comical ease with which “Bones” had put away three of the four previous champions in Rashad Evans, Lyoto Machida and Quinton Jackson had sent the 25-year-old rocketing all the way up to third in Sherdog’s pound-for-pound rankings, as well as the No. 2 spot in FightMatrix’s divisional dominance list.

Against this rising juggernaut, the UFC offered up former Pride Fighting Championships two-division champ Dan Henderson. “Hendo” was already a walking legend in the sport and, as the UFC 17 tournament winner, a throwback to the pre-Zuffa era of the UFC. However, he was not expected to offer any greater threat than Jones’ previous challengers. Henderson would walk in as something worse than a 5-to-1 underdog, endure somewhere between two and five rounds of one-sided thrashing depending on his resilience, and Jones would move on to the next thing, whatever that was.

However, everything went sideways on Aug. 23, the day before Henderson’s 42nd birthday and just nine days before the scheduled event. A knee injury sustained in training forced Henderson to withdraw from the fight. Former middleweight title challenger, longtime Henderson teammate and general superstar pest Chael Sonnen promptly offered his services, but Jones declined on the advice of his inner circle, the most prominent of which was head coach Greg Jackson.

The event was scrapped entirely and, as the next several pay-per-view events were already penciled into the calendar, UFC 151 simply disappeared with no renumbering. UFC President Dana White lashed out at Jones’ decision, famously calling Jackson “f***ing sport killer,” while outside observers pointed the finger at the promotion for putting together such a weak event that it could not withstand the loss of a single fight. There was plenty more blame to go around in the days and weeks to come, as Henderson drew some fire when it came out that he had been injured weeks before, but concealed that fact from the UFC in hopes of recovering sufficiently to compete.

In the end, the UFC’s first PPV cancellation was a watershed moment, but not quite to the point the high emotions of the time seemed to indicate. Jones remained the most dominant fighter in the sport, a distinction he arguably carries to this day. He and Henderson never ended up fighting, but Sonnen’s goading of the champ led to a title shot after all, with a season of “The Ultimate Fighter” to boot, and the mouthy Oregonian came bizarrely close to winning the belt when Jones suffered a freak injury in the first round of their meeting. Jackson failed to kill the f***ing sport, if indeed that had ever been his goal.