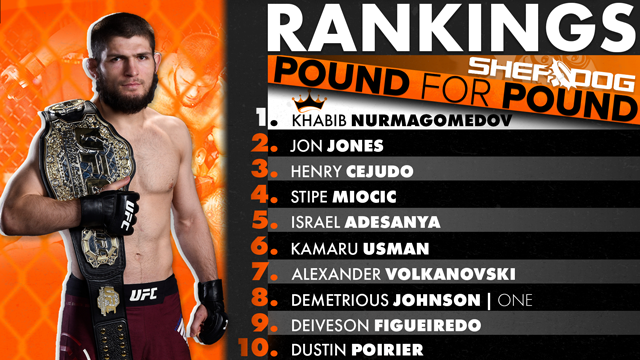 
Thanks to a masterful performance at UFC on ABC 1, Max Holloway has re-established himself as a bona fide pound-for-pound standout.

“Blessed” shattered multiple promotional records en route to a lopsided unanimous decision triumph over ranked featherweight contender Calvin Kattar on Saturday at Etihad Arena in Abu Dhabi. Entering the event, Holloway had lost three of his last four Octagon appearances and was on the verge of falling out of the pound-for-pound poll altogether. Instead, the Hawaiian star moves up one spot, climbing past Conor McGregor to No. 13. That could only be temporary, however, as McGregor will have a shot to improve his position when he faces 10th-ranked Dustin Poirier at UFC 257 on Saturday.

Maybe 30-0 won’t become a reality, but Nurmagomedov put about a perfect a stamp as one could on his mixed martial arts career with a second-round submission of Justin Gaethje in the UFC 254 headliner on Oct. 24. “The Eagle” withstood some heavy artillery from his opponent — including some powerful low kicks — while continuing to apply constant pressure. Eventually, Gaethje wilted on the canvas, as Nurmagomedov choked him unconscious at the 1:34 mark of Round 2. In the aftermath, Nurmagomedov announced his retirement, leaving behind a legacy that includes a 13-0 UFC mark and a record-tying four championship victories in the brutal lightweight division. Nurmagomedov’s belt has not yet been vacated, and the promotion is holding out hope that “The Eagle” will compete one more time in the Octagon.

The competition is catching up to Jones, but it hasn’t surpassed him just yet. “Bones” survived by the skin of his teeth at UFC 247, as he edged Dominick Reyes in a unanimous verdict in the evening’s headliner at the Toyota Center in Houston. In a fight that many observers scored in favor of Reyes, Jones was able to sway the judges’ scorecards with consistent forward pressure and a strong push in the championship rounds. The hard-fought triumph gives Jones 14 victories in championship fights, the most in the history of the Las Vegas-based promotion. After some public back-and-forth with the UFC and Dana White, Jones vacated his light heavyweight strap in August, signaling a new era for the division. A move to heavyweight appears to be looming, but a timetable for Jones’ debut is currently unclear.

Cejudo became only the second fighter in promotion history to successfully defend titles in two divisions at UFC 249 when he defeated Dominick Cruz via second-round technical knockout in the evening’s co-main event at VyStar Veteran’s Memorial Arena in Jacksonville, Florida. After the victory, the Olympic gold medalist made a surprising retirement announcement, citing a desire to start a family. Retirements often don’t last in MMA, but if it holds up, “Triple C” ends his career with a six-fight winning streak that includes triumphs over Demetrious Johnson, T.J. Dillashaw, Marlon Moraes and Cruz. The UFC took the announcement seriously, as Cejudo’s belt was vacated and captured by Petr Yan.

Miocic closed the book on his rivalry with Daniel Cormier in the UFC 252 headliner, earning a unanimous decision triumph to retain his heavyweight title at the UFC Apex in Las Vegas on Aug. 15. In addition to taking two of three from Cormier in what was a memorable trilogy, Miocic’s sixth victory in a heavyweight championship bout tied him with Randy Couture for the most in the history of the division. The Ohio-based firefighter, who also holds the record for most consecutive heavyweight title defenses, is now at or near the top of any GOAT debate in his weight class. A rematch with Francis Ngannou has been scheduled for UFC 260 on March 27.

If a lackluster showing against Yoel Romero at UFC 248 took some of the shine off Adesanya’s star, the City Kickboxing product restored all that was lost and then some with a dominant showing against the previously undefeated Paulo Costa at UFC 253. “The Last Stylebender” was rarely threatened as he befuddled his powerfully built opponent with crisp striking and precise movement, winning by technical knockout in the second stanza of their headlining encounter on Yas Island in Abu Dhabi. Rather than a rematch with Robert Whittaker, Adesanya will turn his attention to two-division dominance with a showdown against reigning 205-pound king Jan Blachowicz at UFC 259.

Usman continued to roll through the welterweight division at UFC 251, taking a dominant unanimous verdict over short-notice foe Jorge Masvidal in the evening’s headliner at Yas Island in Abu Dhabi. While “The Nigerian Nightmare” wasn’t especially exciting, he was undeniably effective in throttling his opponent through clinch work, pressure and takedowns. Usman has now won 12 consecutive fights at 170 pounds, tying him with Georges St. Pierre for the longest winning streak in the history of the division. Usman was expected to make his next title defense against Gilbert Burns at UFC 256 on Dec. 12, but nagging injuries for the reigning champ put that matchup on hold. It has since been rescheduled for UFC 258 on Feb. 13.

Volkanovski improved to 2-0 against Max Holloway at UFC 251, but victory in the rematch came by a much slimmer margin than it did in their first meeting. After Holloway rocked the Australian featherweight champion at the end of Rounds 1 and 2 to take an early lead on the scorecards, Volkanovski finished strong over the bout’s final 15 minutes to earn a contentious split-decision triumph in Abu Dhabi. That makes nine consecutive UFC victories and 19 straight professional triumphs overall for the City Kickboxing representative, who can now move past his rivalry with Holloway and focus on other contenders at 145 pounds. A showdown with Brian Ortega is set for UFC 260 on March 27.

Johnson added a new piece of hardware to his collection in Tokyo, as he outpointed Danny Kingad to capture the One Championship flyweight grand prix belt last Oct. 12. After losing the UFC 125-pound strap to Henry Cejudo in August 2018, “Mighty Mouse” was traded to a new organization and pieced together victories over Yuya Wakamatsu, Tatsumitsu Wada and Kingad within the Singapore-based promotion in 2019. While it wasn’t always a cakewalk for the AMC Pankration product, the accomplishment was made even more impressive considering the fact that all three triumphs occurred essentially one weight class above the division where Johnson established himself as one of the sport’s most dominant competitors. A showdown with reigning One flyweight titlist Adriano Moraes awaits on Feb. 24.

Not only did Figueiredo make his second title defense within a 21-day span, but apparently he did so shortly after being hospitalized overnight with a stomach infection. What transpired was an all-time classic in the flyweight division, as “Deus da Guerra” and Brandon Moreno battled to a majority draw in the UFC 256 headliner that also stands out as one of 2020’s best fights. A deduction for a low blow in Round 3 came back to haunt Figueiredo, whose four-bout finishing streak came to an end. It seems almost certain the Brazilian is destined to lock horns with Moreno again once the championship combatants recover from a hectic couple of months.

Coming off a disappointing loss to Khabib Nurmagomedov in a 155-pound title bout at UFC 242 last September, Poirier displayed his championship mettle against Dan Hooker in the UFC on ESPN 12 main event. “The Diamond” dropped the first two rounds to his Kiwi opponent before picking up the pace down the stretch to earn a thoroughly entertaining unanimous decision at the UFC Apex in Las Vegas. Poirier has won five of his last six Octagon appearances and remains a dangerous force at the top of the division. The American Top Team product a rematch will next get a high-profile shot at revenge in a rematch with Conor McGregor at UFC 257 on Jan. 23.