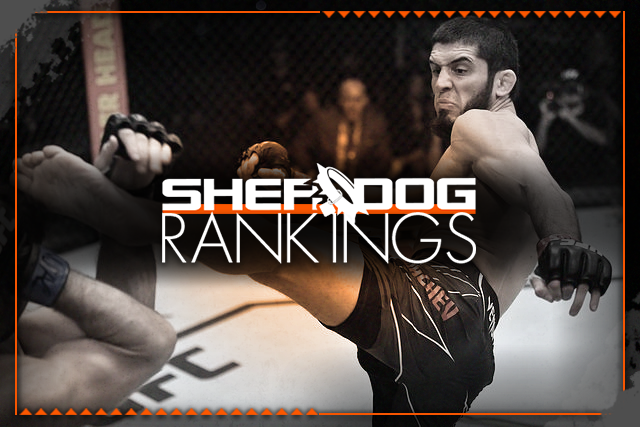 
If it wasn’t clear by now, Saturday night showed that Islam Makhachev’s time has arrived in the Ultimate Fighting Championship’s lightweight division.

The Dagestani delivered in his first headlining performance, as he submitted Thiago Moises in the fourth round at UFC on ESPN 26 at the UFC Apex in Las Vegas. Faced with a game opponent, Makhachev was rarely challenged as he rolled to his eighth consecutive triumph at 155 pounds. The time for a gradual push for Makhachev has reached its end, as he climbs into the Top 10 in Sherdog.com’s lightweight rankings. In the process he displaces another potential foe, Rafael dos Anjos, to the bubble.

Elsewhere, Miesha Tate, formerly a Top 5 staple and ex-champion, rejoins the bantamweight poll at No. 15 following a third-round technical knockout of Marion Reneau in the UFC on ESPN 26 co-main event. With a big name and plenty of willing suitors, there’s plenty of room for “Cupcake” to advance her position in the coming months.