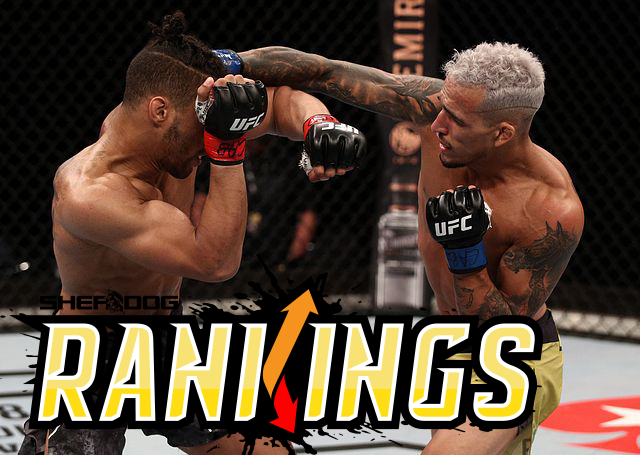 In these uncertain times, one thing is crystal clear: Charles Oliveira has evolved into one hell of a lightweight competitor over the course of his Ultimate Fighting Championship career.

“Do Bronx” earned his seventh consecutive finish in the UFC Fight Night 170 headliner, as he submitted Kevin Lee in the third round of their encounter in Brasilia, Brazil, on Saturday night. The victory is the most significant to date for Oliveira, and it does wonders for his latest ranking, moving him from No. 13 to No. 6 at 155 pounds. Lee, despite losses in three of his last four outings, falls just one spot to seventh.

Meanwhile, Gilbert Burns made a serious statement with a first-round technical knockout of Demian Maia in the UFC Fight Night 170 co-main event. After three straight victories, “Durinho” will make his debut in the 170-pound poll, where he takes Maia’s spot at No. 10.

Elsewhere, Nikita Krylov put the Johnny Walker hype to a screeching halt at light heavyweight with a workmanlike unanimous decision triumph in Brazil. As a result, “The Miner” enters the poll at No. 12, while the Brazilian tumbles from the rankings entirely on the heels of his second consecutive defeat. Finally, Brandon Moreno makes a significant leap at flyweight, as he moves from ninth to fifth following a hard-fought victory over Jussier Formiga, who falls from No. 2 to sixth.