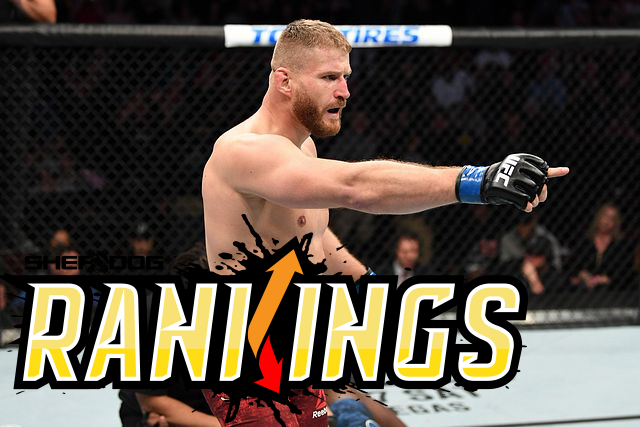 Another serious contender has emerged in the race for the Ultimate Fighting Championship’s light heavyweight crown.

Jan Blachowicz needed an impressive performance to get Jon Jones’ attention at UFC Fight Night 167, and he delivered, knocking out Corey Anderson out in the opening stanza of their headlining bout at the Santa Ana Star Center in Rio Rancho, N.M., on Saturday night. With wins in seven of his last eight Octagon appearances, the Polish light heavyweight appears to be on the brink of a title shot. He also avenges a previous decision loss to Anderson from 2015.

For now, Blachowicz moves from No. 7 to No. 6 in our latest light heavyweight rankings, while his top competition for the next championship opportunity, Dominick Reyes, moves to fifth. Anderson, meanwhile, falls two spots to seventh in defeat.

Elsewhere, Ray Borg authored a clear-cut decision win over No. 6 flyweight Rogerio Bontorin in a featured bout at UFC Rio Rancho. However, the former title challenger missed weight by two pounds, so he doesn’t get to enter the flyweight poll. Since Bontorin technically did not lose a 125-pound bout, he stays put at sixth. Finally, No. 12 women’s bantamweight Macy Chiasson rebounded from her first career defeat to outpoint short-notice foe Shanna Young, allowing her to maintain her position on the 135-pound bubble.