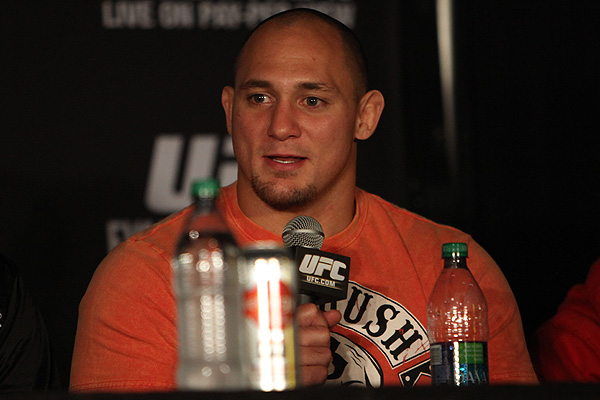 Shawn Jordan scored the biggest win of his career June 15 when he stopped Pat Barry with punches at UFC 161.

Coming off the victory, he joined the Sherdog Radio Network’s “Beatdown” show to discuss the finish, whether he could drop to 205 pounds and more.

On his concerns against Barry: “He’s just a hard-hitting, great striker and he’s real accurate when he throws things. You have to make sure you continue to move and not stand right in front of him, especially since we’re both similar in size. Our range was a little different for this fight because whenever I’m in his range, he’s in mine. … Normally for us we’re short, so we crowd the big guys. When you crowd him, you’re still in good range because we’re both short.”

On whether he thought he could finish Barry in less than a minute: “Absolutely. Going into this fight, just stylistically, it was a pretty slim chance that it was going to go three rounds just because we’re both finishers and we both hit hard. At heavyweight, it takes one punch and it changes the whole fight.”

On whether the knockout was a bigger moment than scoring a touchdown for LSU: “This is fresh in my head, so this would have to be the biggest thing and the fact that [it] was the first fight I made decent money on because of the bonus and stuff. It is a huge changing point for me. It is a huge memory.”

On what he’ll do with his $50,000 “Knockout of the Night” bonus: “I don’t really need a lot of things. I’m probably going to save some of that. You can’t fight MMA forever. You’ve got to save your money, and no telling when I’m going to be able to fight again, so you’ve got to make all that stuff last. I don’t really have any big plans with it other than putting it away.”

On whether he could drop to 205 pounds: “I think I would lose a lot of tools and stuff that I have at heavyweight if I were to try to get down that light. I think it would hurt me in the long run. I mean, I get into camp around 270, 275. I don’t know. … If something comes up and I have to make a decision like that, I think it would be something that would take a little bit of time to discuss and figure out.”

On what aspects of his football career have helped him in MMA: “Mental toughness is a huge part of playing football. The strength coach at LSU is Tommy Moffitt. That’s what he did with all of us. Every athlete that came in and out of there was just mentally tough. I think that’s one thing I did carry over, plus work ethic. I think those two things really, really carried over well and helped me kind of climb the ladder quick.”