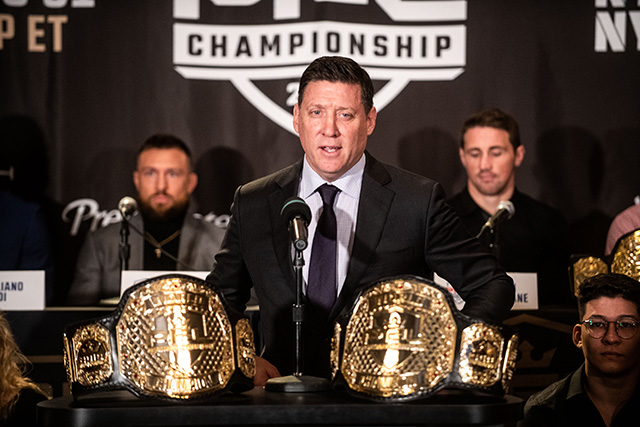 The six weight classes will likely remain the same, but the composition of the Professional Fighters League roster should look significantly different when the promotion begins its third season in 2020.

“At this point in time we don’t expect to make any changes in weight classes for next season. As it relates to the roster itself, 50 percent of the roster will be turned over and we’ll be bringing in new athletes,” PFL CEO Peter Murray recently told Sherdog.com. “Our view is next level. The athletes that have earned their way into the postseason pretty much get that right and the option to continue. The top performers will continue with the league, and others, we were proud to have them, but we think it’s time to replace them and bring in some new talent to freshen things up. That’s what you’ll see.”

PFL already bolstered its roster for next year with one high-profile free agent, as the organization signed former Bellator welterweight champion Rory MacDonald earlier in December. “The Red King” will compete for the PFL’s $1 million prize during the 2020 season.

“We’re a major global player in the sport. Our relationships with all management companies and managers and fighters considering their next chapter, PFL’s in the conversation,” Murray said.

Murray expects the PFL to continue to improve its talent over time.

“The No. 1 goal going into next year is to elevate the roster,” Murray said. “Now that we have two years under our belt, I would say in terms of top priority for us, it’s talent.”

PFL will conclude its second season tonight with championship fights in six divisions with a traditional New Year’s Eve extravaganza. Murray says there are no plans to move the promotion’s year-end event going forward, as it seems to be an ideal fit.

“We’re excited to continue the tradition. Not only in combat or MMA, [it’s] one of the last sporting events of the year,” Murray said. “I think this night is all about celebration and no better way to celebrate with six title fights in one night. You’re off by 11 p.m. ET and sports fans can transition into more of a ball drop mode. I think there’s a role for sports and a role for the PFL on a night such as New Year’s Eve.”