Check out the MMA Forums to discuss the card or enter your comments and predictions below. 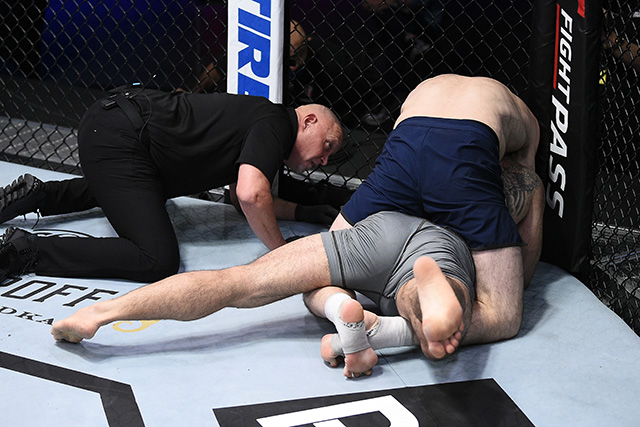 (+ Enlarge) | Photo: Getty/UFC
Shiguemoto was no match to Khizriev.
Shiguemoto fires off a hard body kick and Khizriev answers with a big left. The middleweights are trading heavy kicks and punches right off the bat. Khizriev slips on a kick but recovers and immediately shoots for a single leg before transitioning to a body lock. From there, Khizriev slams Shiguemoto to the mat with relative ease. The Russian is quickly on Shiguemoto’s back with both hooks in. He flattens Shiguemoto out, slides his arm under his opponent’s neck and it’s only a matter of moments before the tap arrives. The Fight Nights Global veteran is still undefeated thanks to the second-fastest submission in Contender Series history. 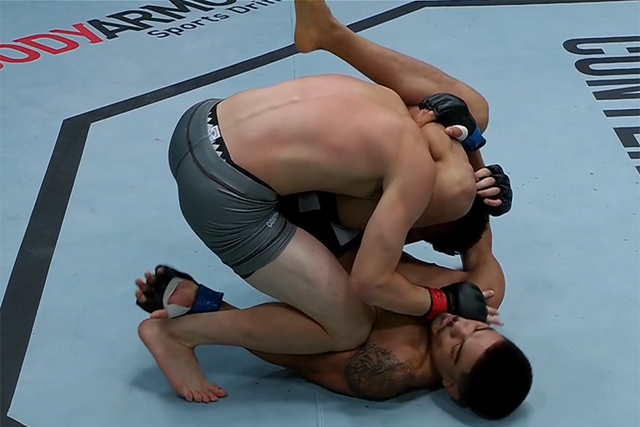 (+ Enlarge) | Screenshot: Sherdog Staff
Rodriguez framed a triangle on Martinez.
Rodriguez opens up with a heavy inside leg kick followed by a solid left hook. Martinez strikes back with a low kick of his own. A clean straight right lands flush for Rodriguez, but Martinez shakes it off after stumbling backward. Rodriguez then catches a low kick, powers his man down and sets up in his foe’s guard. Martinez frames an armbar from below, but Rodriguez is able to slam himself free. Martinez scrambles into top position and Rodriguez has a triangle choke framed. Martinez lifts Rodriguez up and keeps him airborne for several seconds before setting him back on the mat. Rodriguez keeps the maneuver in place as Martinez attempts to throw a few right hands, but his arm goes limp on the final offering. Martinez falls backward to his seat, clearly unconscious. This one is over. 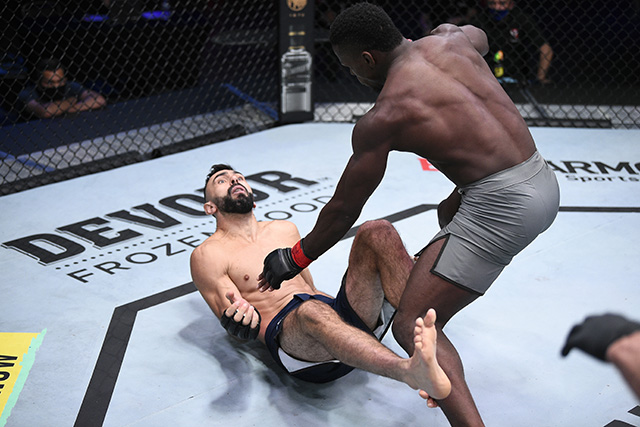 (+ Enlarge) | Photo: Getty/UFC
Hawes lived up the early hype.
Hawes pressures forward and lands a pair of leg kicks followed by a jab to the body. Bestaev is looking to keep the powerful Hawes at range with kicks down the middle. Hawes continues to land heavy low kicks, and Bestaev fires back to keep his opponent at bay, if only briefly. Bestaev is keeping his hands held low. Hawes slips a punch and decks Bestaev with a massive counter right to the chin. Bestaev topples to the canvas and Hawes dives in for the finish, teeing off with about six unanswered hammerfists before referee Chris Tognoni steps in to save Bestaev.

Church pressures forward with a combination and lands a body kick. Blackledge changes levels for a takedown and pushes his foe into the fence. Blackledge tries to trip Church, but it’s defended well. The lightweights separate and Church whiffs on a spinning back kick. Church lands a cople low kicks and Blackledge then counters a body shot with a combo upstairs. They’re trading in the pocket enthusiastically. Church follows a four-punch combination with a solid kick to the body. Blackledge changes levels and takes Church down. Church is able to work his way up and goes right back to work in the standup. Blackledge shows nice head movement and counters effectively. Church continues to move forward, swarming with punches before ending with a head kick. Blackledge looks for a takedown but is denied against the cage. Blackledge lands a knee followed by a series of heavy hooks. Church absorbs the blows and fires back. Church sticks a one-two and follows with a jab. Both men are landing effectively in the pocket. Blackledge counters a low kick with a stiff right cross, then takes his opponent down late in the round. Blackledge ends the round landing punches from top position before Church stands at the horn. 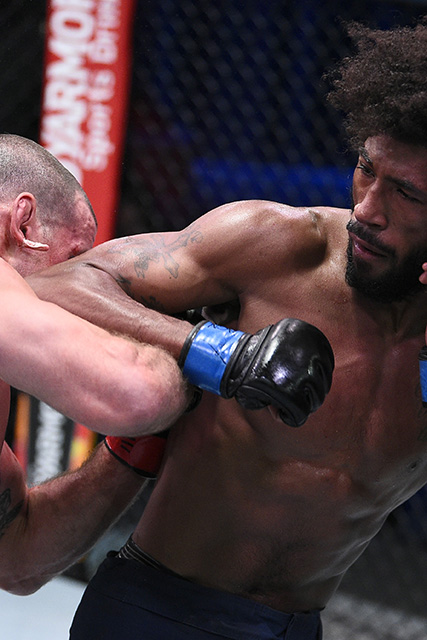 (+ Enlarge) | Photo: Getty/UFC
Blackledge earned a hard-fought victory.
A right hook lands for Blackledge, who steps off at an angle. Church is pressuring again, but Blackledge forces the clinch. Blackledge fires off a knee that lands below the belt, and Church is doubled over in pain. Marc Goddard pauses the action to allow Church to recover. Action resumes and Church demonstrates excellent head movement while landing a combination. A head kick lands clean for Blackledge, but Church eats it well. Blacklege mixing up kicks to the body and knees to the clinch. Blackledge has Church against the fence and tees off with punches. Church is able to fight his way out of the predicament and this tim it’s his turn to land a low blow on Blackledge. After a brief pause, they’re back at it. Church sticks a jab before Blackledge changes levels. Chruch defends against the fence, but Blackledge changes levels successfully on his hard-charging foe and plants him on the mat. Church rolls for an armbar but Blackledge escapes. Church gets up but is quickly taken down near the fence. Blackledge is in full guard, landing periodic punches to the face. Church frames a kimura for a moment but can’t secure it. Church transitions to an armbar, but Blackledge moves to back control in a scramble. Church turtles up and Blackledge lands some punches to the side of the head. Church gets up and is powered right back down. Church gets up again but can’t land anything of consequence before the horn.

Matavao is the aggressor early, wading forward and swinging looping hooks. A big overhand right lands for Matavao, who follows up with a heavy low kick. Nchukwi blocks a high kick and then stuns his foe with a straight left. Matavao looks to regain his bearings and eats a kick to the body. Nchukwi forces the clinch and lands some knees to the body. Matavao continues to stay busy with hooks and a variety of kicks. Nchukwi counters a kick with a straight left. Nchukwi lands a powerful right hand near the fence before his opponent circles out of danger. Nchukwi sticks a jab. A left hook to the body lands for Nchukwi, but Matavao flurries with punches in return. Nchukwi lands another solid jab. Matavao has the speed edge, but Nchukwi lands with more impact. A pair of body kicks find a home for Nchukwi. Another body kick for Nchukwi. Nchukwi pressures and lands a knee to the chin. Matavao eats it and circles away. Nchukwi just misses a head kick but follows with a jab in the waning moments. Matavao responds with a combination before the horn. 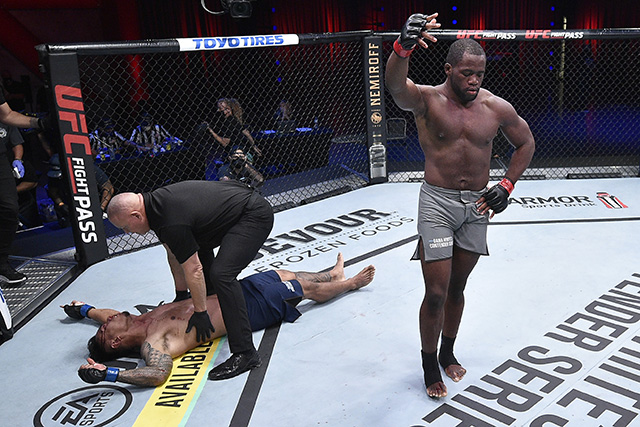 (+ Enlarge) | Photo: Getty/UFC
Nchukwi chopped down Matavao with a kick.
Matavao has a cut on the outside of his left eye as the frame begins. Matavao dodges a combination. Nchukwi lands a couple solid jabs. Nchukwi flurries with a series of body punches in close quarters before Matavao circles away. Nchukwi with a straight right to the body. Matavao is able to angle off and counter with a nice combination, but Nchukwi continues to march forward, landing heavy punches. Nchukwi remains persistent with his pressure, and after having several high kicks blocked earlier, Nchukwi catches Matavao with a left high kick as his foe circles to the right. It connects with shin on chin and there is no need for any follow-up offense as Matavao crumbles to the canvas, his head bouncing off the mat. Nchukwi remains unbeaten in emphatic fashion. Matavao is laid out on the canvas for several minutes before finally sitting up and congratulating Nchukwi after the outcome is announced.