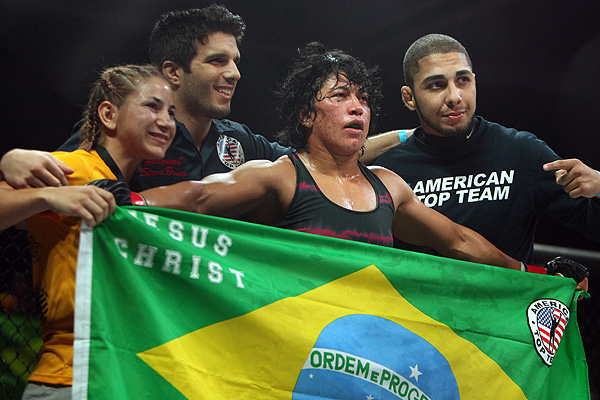 Invicta Fighting Championships has made a change to its upcoming pay-per-view debut, as Charmaine Tweet will replace the injured Julia Budd against Ediane Gomes at Invicta FC 6.

Promotion officials additionally revealed Thursday that unbeaten Norma Center will take on Scottish talent Joanne Calderwood, who also enters the cage sporting a perfect pro record. Calderwood was initially slated to face Sarah Schneider, but Schneider was forced to withdraw from the booking with a leg injury.

Tweet, 36, rides a three-fight winning streak into her Invicta debut after beginning her career just 1-3. The Canadian, who was submitted by Ronda Rousey in her first pro bout, owns all four of her victories by way of submission, most recently choking out Amanda Bell on June 1 under the Battle for the Border banner.

Gomes (Pictured) enters the cage on the heels of four consecutive victories, making her Invicta debut this past October with a first-round submission of Katalina Malungahu. The 32-year-old then followed that performance with a unanimous decision win over Hiroko Yamanaka, outpointing the former Smackgirl openweight queen this past January at Invicta FC 4.