If this is truly it for the UFC women’s featherweight division, there is no question whose house it was.

On March 9, in the co-main event of UFC 259, two-division champ Amanda Nunes overwhelmed Megan Anderson, dropping her with punches, then following her to the ground and locking up a beautiful reverse triangle armbar. The challenger was forced to ask out of the fight after barely two minutes, giving the “Lioness” a record-tying second defense of the 145-pound title.

In the aftermath, Anderson claimed that the Ultimate Fighting Championship planned to close down the women’s featherweight division. While the promotion was quick to dispute that claim, the fact remains that the division barely exists as it is. Of the fewer than ten women who have competed at 145 pounds in the UFC during Nunes’ reign, almost all have also competed at bantamweight, and it is entirely possible that the 6-foot tall Anderson is the only one who could not do so. If Nunes retires or goes on hiatus in order to spend more time with her newborn daughter in the next year or two, her 135-pound title will be the subject of fierce competition, but for the featherweight division, it might feel a bit like pulling the plug.

Here is the history of the UFC women’s featherweight title and the times it was won, lost or defended. It tells the story of two of the most dominant fighters in the history of the sport, and a division that often struggled to supply them with suitable challenges. 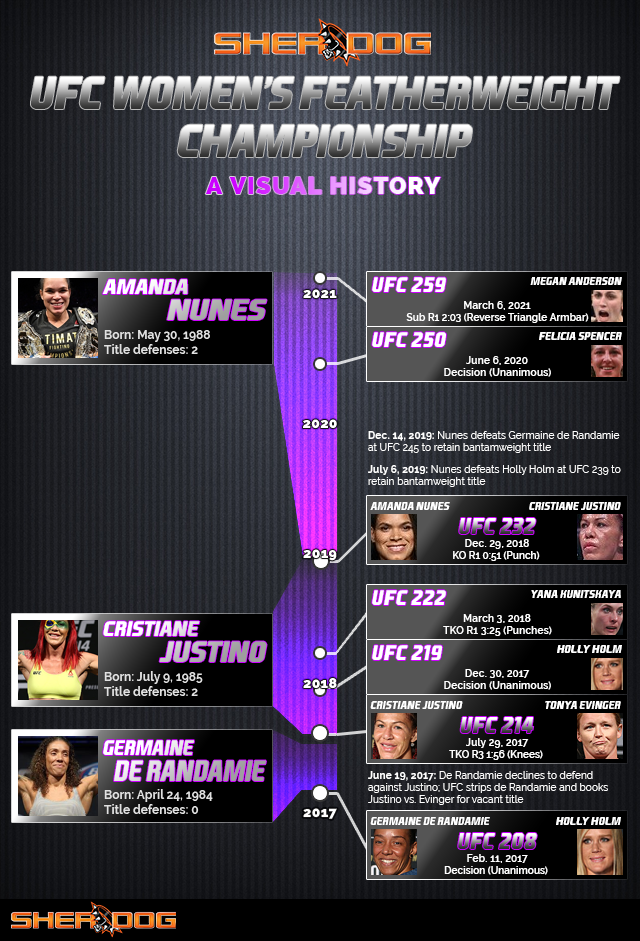