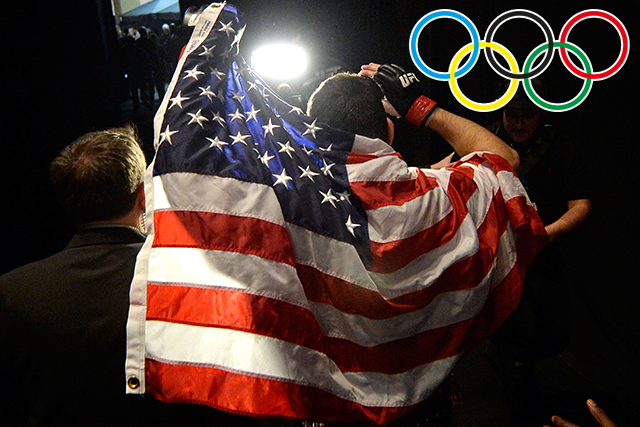 Sign up for ESPN+ right here, and you can then stream the UFC, PFL and “The Ultimate Fighter” live on your smart TV, computer, phone, tablet or streaming device via the ESPN app.

With the 2021 Summer Olympics scheduled for July 23-Aug. 8 in Tokyo, Sherdog.com put together hypothetical MMA Olympic teams for various countries. This multi-part series will map out the yellow brick road to Tokyo for the men and women who call the cage home, coronavirus pandemic be damned.

Every four years, the global community gathers together in celebration of athletic competition in its purest form. In their 125-year history, the Olympics have provided the sports world—people of all races, creeds and faiths—with countless memories in which to revel. The United States has perhaps the richest history of any nation in the Summer Games. There was Jesse Owens winning four gold medals in Berlin in 1936, destroying the Nazis’ view of racial superiority as Adolf Hitler looked on; there was Jim Thorpe ruling the decathlon and pentathlon in 1912, Bob Beamon shattering the long jump record in 1968 and Michael Johnson’s breathtaking 200-meter run in downtown Atlanta in 1996; there was Cassius Clay in 1960, Mary Lou Retton in 1984, the Dream Team in 1992 and Rulon Gardner in 2000. Other Americans have etched their places permanently in Olympic lore: Michael Phelps, Mark Spitz, Janet Evans, Greg Louganis, Carl Lewis, Edwin Moses, Bruce Baumgartner, Dan Gable, Florence Griffith Joyner, Jackie Joyner-Kersee, Wilma Rudolph, Simone Biles, Katie Ledecky and Babe Didrikson Zaharias to name but a few.

The sport of mixed martial arts remains an outsider at the Olympics, and considering the tight window in which the competition takes place, that seems unlikely to change anytime soon, if ever. MMA may be too attritive an activity to be contained in a 16-day box. Injuries are inevitable, cuts and broken bones commonplace. While that reality can be harsh, it cannot stop the imagination of avid combat sports fans from wandering and wondering. What if MMA was an Olympic sport? What would a squad from the United States look like?

The selection process has been completed, and a variety of factors were taken into consideration, from age, ranking, leadership skills and ability to career trajectory, head-to-head histories and past Olympic experience. Fighters who were selected as starters in 2016 were deemed ineligible in order to keep the hypothetical team fresh. The United States National MMA Team’s bags are packed, its plane pointed towards Tokyo International Airport: a head coach, five assistant coaches, a fighter in each of the 12 major weight classes and two alternates in each weight class. The squad will be coached by former World Extreme Cagefighting champion Mike Thomas Brown, who has become one of the true influential voices at American Top Team in Coconut Creek, Florida. He will be assisted by Jackson-Wink MMA’s Mike Winkeljohn, the American Kickboxing Academy’s Daniel Cormier, Fortis MMA’s Sayif Saud, Alliance MMA’s Eric Del Fierro and the MMA Lab’s John Crouch.

HEAVYWEIGHT: Lewis brings a lot to the table, from his brutal honesty and self-deprecating humor to crushing light-switch power. The New Orleans native has rattled off four consecutive victories and reclaimed his spot as a top contender in the Ultimate Fighting Championship heavyweight division. Lewis has delivered 20 of his 25 career victories by knockout or technical knockout and now ranks second on the UFC’s all-time list for wins by a heavyweight (16). Alternates: Curtis Blaydes, Tyrell Fortune

LIGHT HEAVYWEIGHT: A four-time NCAA All-American wrestler and onetime national champion, Davis excelled in his transition to mixed martial arts—first as a member of the UFC roster and later as part of Bellator MMA. The 36-year-old Alliance MMA export has won nine of his past 12 bouts, earning his stripes as one of the sport’s premier competitors at 205 pounds. Davis held the Bellator light heavyweight crown for 232 days, from Nov. 4, 2016 to June 24, 2017. Alternates: Corey Anderson, Anthony Smith

MIDDLEWEIGHT: Cannonier, a former heavyweight, has been a physical force at 185 pounds. The 37-year-old Dallas native has compiled a 3-1 record since downshifting to the middleweight division and unveiling a sculpted physique, posting consecutive victories over David Branch, Anderson Silva and Jack Hermansson before dropping a unanimous decision to former UFC champion Robert Whittaker. Cannonier operates out of the star-studded MMA Lab camp in Glendale, Arizona. Alternates: Derek Brunson, Uriah Hall

WELTERWEIGHT: One of the true gentlemen of the sport and outstanding ambassador for martial arts in general, Thompson remains a key player in the 170-pound weight class. Though he failed in two attempts to capture the undisputed welterweight crown, the South Carolina-based karateka recently re-energized his career with back-to-back wins over Vicente Luque and Geoff Neal. Thompson, 38, has been finished only once in 21 professional appearances. Alternates: Michael Chiesa, Neil Magny

LIGHTWEIGHT: No fighter in mixed martial arts embodies the warrior spirit any better than Poirier. The longtime American Top Team export has lost only once—to the unbeaten Khabib Nurmagomedov—in his past nine outings. Poirier made serious waves at UFC 257, where he put away former two-division champion Conor McGregor with punches in the second round of their Jan. 23 main event and set the stage for a blockbuster trilogy bout between the two. Poirier has secured 20 of his 27 career victories by knockout, technical knockout or submission. Alternates: Justin Gaethje, Michael Chandler

FEATHERWEIGHT: Holloway established himself as generational fighter while he was still in his 20s. The former featherweight champion rebounded from consecutive losses to Alexander Volkanovski with a scintillating five-round unanimous decision over the shoe-leather tough Calvin Kattar in the UFC on ABC 1 headliner on Jan. 16. Holloway, who does not turn 30 until December, already holds the all-time UFC records in total strikes landed (2,805) and significant strikes landed (2,618). Alternates: A.J. McKee, Aaron Pico

BANTAMWEIGHT: Sterling took possession of the Ultimate Fighting Championship bantamweight title under less-than-ideal circumstances through no fault of his own, as he absorbed an illegal knee strike from Petr Yan at UFC 259, could not continue and benefitted from the subsequent disqualification. Nevertheless, the 31-year-old Serra-Longo Fight Team standout finds himself in the midst of his competitive prime as one of the world’s elite bantamweights. Sterling has rattled off six straight wins since his December 2017 knockout loss to Marlon Moraes. Alternates: Cory Sandhagen, Sergio Pettis

FLYWEIGHT: The championship window appears to be closed for Benavidez, who will likely go down as one of the most accomplished fighters to never win a major MMA title. Still, most observers carry him in high regard—a reality that makes him a strong sentimental pick. Benavidez last appeared at UFC 259 on March 6, when he dropped a unanimous decision to the undefeated Askar Askarov and slipped to 0-3 across his past three outings. His resume speaks for itself, highlighted by wins over Miguel Torres, Ian McCall, Jussier Formiga, Henry Cejudo and Alex Perez. Alternates: Alex Perez, Brandon Royval

WOMEN’S FEATHERWEIGHT: Harrison was a two-time Olympic gold medalist in judo, and her move to mixed martial arts has gone swimmingly. A cornerstone of the Professional Fighters League promotion, she has won all 10 of her bouts, eight of them by knockout, technical knockout or submission. Harrison, 31, advanced to the 2021 PFL playoffs on June 25, when the American Top Team representative submitted Cindy Dandois with a first-round armbar in the PFL 6 main event. While she competes at 155 pounds, the Middletown, Ohio, native has already proven she can make the cut to featherweight. Alternates: Cat Zingano, Leslie Smith

WOMEN’S BANTAMWEIGHT: Forever known for her cataclysmic upset of Ronda Rousey at UFC 193, Holm held the undisputed women’s bantamweight title from Nov. 14, 2015 to March 5, 2016. “The Preacher’s Daughter” was a world-class boxer prior to her crossing over to mixed martial arts, as she compiled a 33-2-3 record and captured multiple world championships. Holm last appeared at UFC on ESPN 16, where she laid claim to a unanimous decision over Irene Aldana in their Oct. 3 headliner. Alternates: Sara McMann, Macy Chiasson

WOMEN’S FLYWEIGHT: The affable Modafferi has earned almost universal adoration across her 18-year career as both an MMA pioneer and an ambassador. “The Happy Warrior” has pieced together a 25-18 record while competing all over the world, with 14 of her 18 defeats resulting in decisions. Modafferi was a finalist on Season 26 of “The Ultimate Fighter” reality series and has fought for titles in various organizations, including the UFC, Strikeforce and Invicta Fighting Championships. Her leadership qualities and upbeat personality make her a natural fit for any international team. Alternates: Liz Carmouche, Ilima-Lei Macfarlane

WOMEN’S STRAWWEIGHT: Dern appears to be hitting her stride as a mixed martial artist, as evidenced by her current four-fight winning streak—a run of sustained success that has propelled her into the Top 10 in the UFC’s women’s strawweight rankings. She last appeared at UFC on ABC 2, where she submitted Nina Nunes with an armbar in the first-round of their April 10 showcase. A longtime Brazilian jiu-jitsu black belt and one of the most decorated grapplers of all-time, Dern was a gold medalist at the 2015 Abu Dhabi Combat Club Submission Wrestling World Championships. Alternates: Tecia Torres, Angela Hill