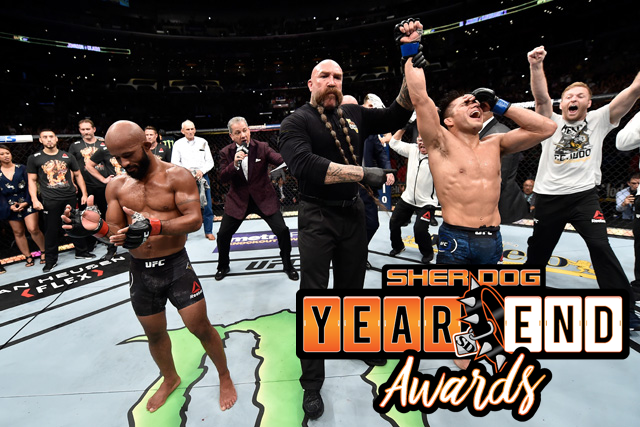 Other than those closest to Henry Cejudo, few gave the 2008 Olympic gold medalist much of a chance in his rematch with Demetrious Johnson in the UFC 227 co-main event on Aug. 4 at the Staples Center in Los Angeles. Johnson entered the cage as the reigning flyweight champion and better than a 5-to-1 favorite. There was an aura of invincibility about him, as he had never lost at 125 pounds, found himself on a 13-fight winning streak and was in the midst of a historic title reign. Plus, Johnson had already soundly defeated Cejudo, having stopped him inside three minutes with a volley of knee strikes to the body in 2016. That was the setting for Sherdog.com’s 2018 “Upset of the Year.”

Cejudo overthrew the longtime king by the narrowest of margins, as he dethroned Johnson by split decision and became the second undisputed flyweight champion in Ultimate Fighting Championship history. The Olympian struck for takedowns in the second, fourth and fifth rounds and paired them with top control, helping to offset the damage he absorbed to the legs and body from repeated Johnson kicks. All three cageside judges scored it 48-47: Sal D’Amato and Ron McCarthy for Cejudo, Marcos Rosales for Johnson. The setback, which ended Johnson’s remarkable run atop the flyweight division at 2,142 days, was the first for “Mighty Mouse” since a bantamweight battle with Dominick Cruz in October 2011.

Cejudo admits he drew upon extra motivation from his blowout loss to Johnson two years prior. However, he claims his confidence never wavered.

“It was always there. My belief was always there. That never changed,” Cejudo said. “Because [of] the way I went out the first fight, that put a chip on my shoulder. It made me fall in love with mixed martial arts even more so, because [in] my first fight with Demetrious, I thought I was going to drag him through the mud. I really did. I got a reality check, but I used that as a motivator.”

The result was far from decisive, owing to Johnson’s 81-51 advantage in significant strikes landed -- a margin aided by a 39-4 edge in leg kicks. However, Cejudo’s wrestling provided a path to victory for the underdog. Johnson credited “The Messenger” for the adjustments he made but still believes he won the rematch.

“The first time we just fought. This time, he was more patient. I could feel each time he would get the takedown, he would just hold, hold, hold,” Johnson said. “It wasn’t like he’d posture and pass my guard [and] get a submission game going. It happens. I don’t think the judges know how to score leg kicks, but it is what it is.”

Cejudo, 31, engaged “Mighty Mouse” at close range, forcing the champion to take a reactive approach. His tactics paid off.

“It was a close fight. Demetrious is a guy that you really have to adjust to. That’s all it was. I know it could’ve gone either way,” Cejudo told Fox Sports 1. “He’s been the champ for a reason. He’s strategic. I think the difference was I was able to use my wrestling to control and show that dominant side to the judges.

“It was having Demetrious come to me, put him on his back and control him, and if he does [get up], make him work for it,” he added. “I could tell Demetrious got tired a little bit. He’s good on his feet, but when you transition to wrestling, it changes the fight a little bit for him.”

Johnson suffered damage to his right foot and right knee in the 25-minute encounter.

“I’m fine. Losing happens. Every great champion loses,” Johnson said at the post-fight press conference. “I’ve lost before when I fought Dom. I lose in the gym. I’m more upset about the injuries, but other than that, I’m OK.”

While a trilogy bout between Cejudo and “Mighty Mouse” seemed like a logical next step considering the contentious nature of the decision and Johnson’s status as an all-time great, the two instead went their separate ways in moves virtually no one could have anticipated. Cejudo was booked opposite bantamweight titleholder T.J. Dillashaw in a champion-versus-champion superfight, and as rumors swirled about the UFC’s desire to shutter its flyweight division, Johnson was sent to the Singapore-based One Championship promotion in a first-of-its-kind “trade” involving Ben Askren.

“I always had a desire to compete in Asia,” Johnson told Sherdog.com. “I grew up watching Asian-based promotions like Dream [and] Pride [Fighting Championships]. At the last [part] of my UFC career, I found myself watching more One Championship than UFC, and it wasn’t for mixed martial arts; it was for high-level muay Thai and the kickboxing.”

A lukewarm-at-best relationship with UFC President Dana White only enhanced Johnson’s desire to go in another direction.

“Obviously, me and Dana White never had the best relationship,” Johnson said. “It wasn’t bad, but it wasn’t fantastic. One week you’re the greatest fighter of all-time; the next week your X, Y and Z. His perception changes all the time with fighters, which is fine.”

Johnson, who will turn 33 in August, expects to finish out his career in One Championship.