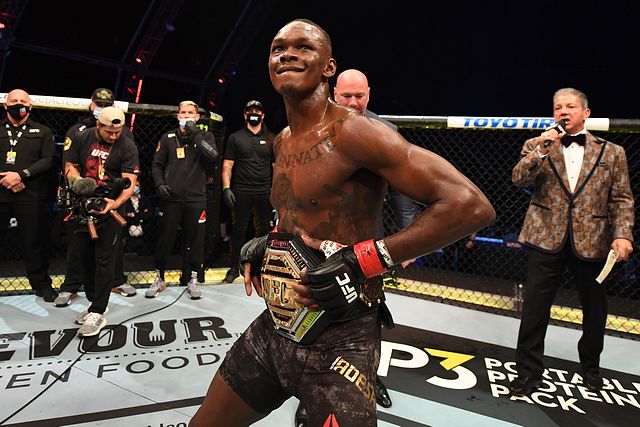 
In general, I'm not a fan of Israel Adesanya's trash talk. It possesses no real humor or creativity, and is indistinguishable from how a teenager would flame an adversary online. However, he touched upon a very interesting aspect of fighting, if crudely, when he called his UFC 253 adversary, Paulo Costa, “dumb.”

What distinguishes fighters at the highest tier? At the lower levels, there is often a large physical disparity between the two combatants. One fighter is simply much stronger, faster and more skilled than the other. Even at the middle tier, one fighter might have major technical deficiencies; he throws his left hook with a hitch, he paws with his jab, he doesn't angle off with his sprawl, etc. The relative flaws and strengths of both fighters are pitted against one another. Intelligence plays a role here, but in a more basic manner. If a fighter has worse striking and better grappling, he will focus on the latter. This describes the majority of UFC fights.

But what happens at the very top? Costa and Adesanya, for instance, don't have any large, clear weaknesses. Both possess excellent kickboxing technique. Both have mastered the fundamentals of movement and defense. Adesanya has very good takedown defense and is even harder to keep down once there, and Costa has been equally immune to his opponents’ grappling. Both have tremendous physical gifts: Costa with his explosive, brutal knockout power in both hands and Adesanya with his reach, foot speed, reaction time and pinpoint accuracy. What determines the winner, then? More than all the other levels of MMA, this is where intelligence and preparation come into play.

In hindsight, it seems “obvious” that Adesanya would prevail over the musclebound challenger. But the fight didn't have to go that way at all. Consider how much worse Adesanya's performance was against a similarly big puncher in Yoel Romero. Personally, I had Romero winning the fight, taking rounds 1, 2, and 5. Why couldn't Costa, who won a split decision over the Cuban, is 13 years younger and has better cardio, replicate or exceed that same performance?

Romero managed to connect with a few explosive flurries early, and it in turn made Adesanya more tentative with his striking afterwards. However, like all great champions, Adesanya learned from his performance and came back better than ever for his next outing. Costa, meanwhile, didn't adequately prepare or adjust for the challenges Adesanya presented.

UFC 253's main event actually started all right for the Brazilian, with Costa landing several solid kicks to the legs and body even as Adesanya was landing his own to the calves. This was a good gameplan for the challenger; chopping a taller, longer fighter down to size with kicks is a classic kickboxing strategy, and has worked many times in MMA, with Santiago Ponzinibbio versus Neil Magny being my favorite modern-day example.

However, Adesanya quickly adjusted, fighting from an even longer distance, one at which Costa's feet couldn't reach him. Adesanya's kicks, however, still managed to reach Costa, scoring again and again with roundhouses to the calves and teeps to the knee.

Of course, naked leg kicks are far from a risk-free strategy, or else every taller fighter would be firing them constantly. They can be countered hard with a straight punch to the head. Adesanya was very clever and careful about not telegraphing his leg kicks in any way, catching Costa by surprise time and again and never being predictable with his set-up or the strike itself. He even fired a few kicks to the head and worked his jab to further keep Costa guessing.

Here, it was time for Costa to make his own adjustment, and alas, he didn't. I understand his reticence to come in guns blazing with left hooks and overhand rights trying to take the Nigerian's head off. That strategy, perfectly reasonable at the time, had failed for Robert Whittaker, as Adesanya timed his retreats beautifully, even turning the corner nicely instead of going straight back, and was soon hitting Whittaker with precise, straight counters.

At the same time, staying back, absorbing punishment, and hoping Adesanya makes a mistake was not the way, either. As we've seen from the middleweight champion's fights in MMA and kickboxing alike, once he gets comfortable and gets a good sense of the distance, he will simply pick the opponent apart, tending to work off his jab more and more as this occurs.

Costa also couldn't afford to take so much punishment to his legs. As a big puncher, Costa’s legs are a major source of his explosiveness and power. Every shot to his calves wasn't just scoring points for Adesanya, but reducing the chance of the challenger connecting on a knockout punch later.

Seemingly stuck in space, Costa resorted to goading the champion on. However, such tactics simply aren't going to work against a serious professional fighter, let alone one the caliber of Adesanya. Despite his antics outside the cage, Adesanya is the height of discipline inside of it.

You know how the rest unfolded. Costa was eventually slowed down so much by the leg kicks that it opened up the head kicks and boxing for Adesanya, and he scored a spectacular knockout late in Round 2.

Again, as one-sided as the defeat looks, there were any number of adjustments Costa could have made. In general, he was too flat-footed and predictable coming forward. Bouncing on his feet more, retreating and using more lateral movement would have caused more of Adesanya's kicks to miss, given Costa time to check others and possibly given him an opportunity to counter others still. Notice that it's exactly this type of movement that was so successful for Kelvin Gastelum against the middleweight king.

Fights at this level truly do resemble chess matches. Both combatants have plenty of weapons at their command, and it's about which one will marshal them more effectively. Battles are won and lost based on preparation and intellect, not the purely physical talents. Adesanya-Costa was a brilliant example of this.
« Previous Next »