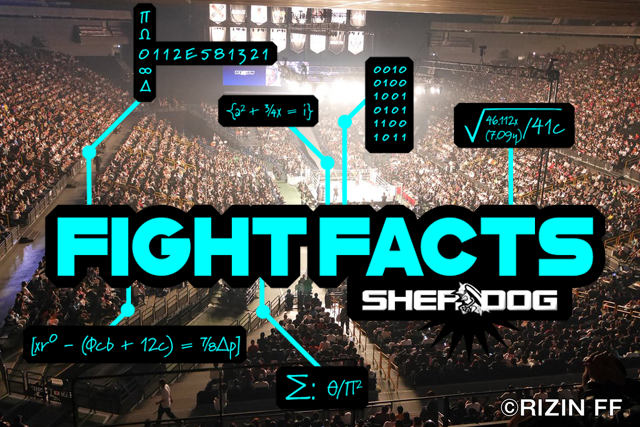 Fight Facts is a breakdown of all of the interesting information and ring rarities on every card, with some puns, references and portmanteaus to keep things fun. These deep stat dives delve into the numbers, providing historical context and telling the stories behind those numbers.

In staging an event with some of the promotion’s biggest stars, the Rizin Fighting Federation on Sunday treated fans to a dream headliner between its bantamweight grand prix winner and its most-heralded kickboxer. Rizin 13 featured the first flying knee knockout in the promotion’s history, the exorcism of an eight-year losing streak and a fighter motivated by the love and support of her family during a time of great pain.

FOR ‘KID’: Due to Typhoon Trami hitting Japan, the bout order of Rizin 13 was rescheduled to place the main attractions in the middle portion of the card. With promotion executives concerned about time constraints, they opted to forego an opening ceremony, as well as most post-fight interviews, and instead held an emotional memorial for recently deceased MMA pioneer Norifumi Yamamoto.

FROM SMACKGIRL TO RIZIN: Other than Rizin’s debut show, which featured none, every event in the organization’s history has featured at least two women’s matches. Women’s bouts now account for just over 25 percent of all fights in Rizin. By comparison, women have accounted for exactly 10 percent of all Ultimate Fighting Championship bouts since their divisions came to the UFC.

AVENGING ANGEL: By avenging a 2016 submission loss to Andy Nguyen at Rizin 4, Miyuu Yamamoto became the first fighter to avenge a defeat suffered at a prior Rizin event.

OLD DOG, NEW TRICKS: At the age of 44, Mirko Filipovic extended his winning streak to nine fights with a first-round TKO of Roque Martinez. The winning streak is the longest of his career. Filipovic has stopped all nine of his opponents during his current run, including each of the last five by knockout.

GREAT VENGEANCE AND FURIOUS ANGER: After forcing the doctor to intervene because of a nasty cut on Martinez’s forehead, Filipovic has finished seven different opponents over the years due to injury, doctor stoppage or corner stoppage.

PICK SIX: After knocking out Jake Heun, Jiri Prochazka now holds the most knockout victories in Rizin history with six. Filipovic has five.

LUCKY SEVEN: With his knockout victory over Heun, Prochazka moved into a first-place tie with Rizin 13 headliner Kyoji Horiguchi for the most wins under the Rizin banner with seven. It was his 21st stoppage in 22 career wins.

HE ACTUALLY DID IT: By winning an exhausting decision over the debuting Abdelrahman Shalan, Bob Sapp broke a 14-fight losing streak in MMA that dated back to 2010. Sapp did win a technical decision over Chad Rowan in 2015, but that bout was contested under shoot boxing rules and did not count on his MMA record. Sapp's bout with Shalan marked the first time in his MMA career that he ever went the distance.

MOUNTAIN OF A MAN: Hitting the scales at a svelte 369 pounds, Shalan ranks as the second-heaviest fighter to ever compete in Rizin. Kaido Hoovelson tipped the scales at 403.5 pounds when he fought Peter Aerts in 2015 and the following year came in about seven pounds lighter at 396.8 for Rizin 4.

DO IT ALL FOR MY BROTHER: Brothers Mikuru Asakura and Kai Asakura competed and prevailed by decision at Rizin 13. This marked the first occasion two brothers have won on the same card at a Rizin event. Across combined Pride Fighting Championships and Rizin history, this was the first winning brother tandem on a card since Pride Critical Countdown Absolute in 2006, when both Antonio Rodrigo Nogueira and Antonio Rogerio Nogueira fought and won.

AND THE KICK IS GOOD!: The bout between Haruo Ochi and Mitsuhisa Sunabe marked the first men’s strawweight bout in Rizin history. Ochi’s third-round knockout with soccer kicks was only the second time a fighter had been knocked out with those kicks inside the promotion. Cruickshank scoring the first against Shinja Sasaki at Rizin 1 in 2016.

NOT SUPPOSED TO BEND THAT WAY: In forcing Mina Kurobe to tap with a first-round kimura, Ayaka Hamasaki recorded the first submission of its kind in company history.

BRING ME A DREAM: Manel Kape put Yusaku Nakamura to sleep with a third-round rear-naked choke and in doing so earned the fifth technical submission in Rizin history and only the second by rear-naked choke.

SONG OF SONGS: Filipovic used his trademark walkout song of “Wild Boys” by Duran Duran. He has walked out with this song for many years spanning multiple promotions, including all six of his victorious appearances in Rizin. If Filipovic walked out to “Wild Boys” in all of his appearances in Pride, Dream, the UFC and Rizin, it would amount to 44 uses of the song for a record of 31-10-2 and one no-contest.

HOW DARUDE: Both Brandao and Wanderlei Silva walked out to “Sandstorm” by Darude over the weekend. Silva chose the song before fighting Quinton Jackson at Bellator 206, and Brandao picked it at Rizin 13. Both fighters lost by second-round knockout.

HIGHWAY TO THE DANGER ZONE: Decked out in a full United States Navy flight suit and sunglasses, Heun strode confidently to the ring accompanied by all-time great walkout song “Danger Zone” by Kenny Loggins, from the “Top Gun” soundtrack. Throughout UFC history, only one recorded fighter has walked out to the song before: Zach Makovsky at UFC 170, and he emerged victorious.