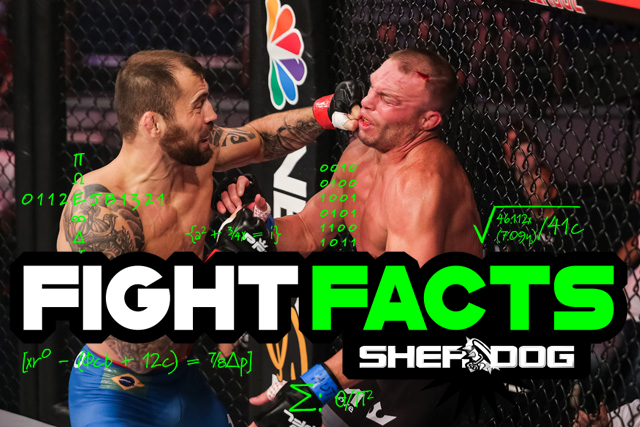 Heading to the nation’s capital for the second time in less than a year, the Professional Fighters League showcased the middleweight and welterweight divisions at PFL 3 on Thursday at the GWU Smith Center in Washington, D.C. It featured two monumental upsets, a historic clash between a fighter and the son of a man he once defeated and the first competitor put to sleep by a rear-naked choke in PFL-World Series of Fighting history.


CHECK THE SCOREBOARD: Joao Zeferino and Magomed Magomedkerimov each picked up first-round stoppages to earn six points at PFL 3, placing them atop the welterweight leaderboard. At middleweight, Abusupiyan Magomedov scored a first-round knockout to earn six points, putting him in sole possession of first place in the divisional standings.

RECIPE FOR SUCCESS: After three stops on the 2018 PFL schedule, no event has had more than four fights go the distance. A finish rate in these three events of about 70 percent is significantly higher than the PFL’s 55 percent finish rate prior to the season.

BOOKIE BREAKDOWN: Two massive upsets occurred at PFL 3, with the main and co-main event winners both coming in as gigantic underdogs. Pavel Kusch entered as a +885 underdog against the -1350 favorite Abubakar Nurmagomedov; it was an upset with odds about as big as Matt Serra knocking out Georges St. Pierre at UFC 69. In the main event, Ray Cooper III came in as the +925 underdog against Jake Shields at -1400, springing an upset with odds the size of Holly Holm’s knockout upset of Ronda Rousey at UFC 193.

TRIPLE WORD SCORE: At 21 letters, Magomedkerimov has the longest full name of any fighter to ever compete in WSOF-PFL. He was joined on the card by 20-letter Nurmagomedov and 19-letter Magomedov -- the three longest-billed names in company history, along with Walber Brito de Barros.

FOR 2,000 YEARS, KNOWLEDGE PASSED FROM FATHER TO SON: Losing by knockout to Cooper III and by majority decision to Ray Cooper III 16 years earlier, Shields became one of the only fighters in MMA history to be defeated by a father and son.

CRUSHING IT: In beating Nurmagomedov, Kusch earned his 20th career victory by submission. Kusch has never won by decision, with all 23 of his wins coming by stoppage. In his 28 career bouts, Kusch has only gone the distance once while fighting beyond the first round six times.

WHAT A STORY: Rick Story, the only welterweight on the card to win without finishing his opponent, fought 19 times in the Ultimate Fighting Championship before leaving to join the PFL. Story has the most Octagon experience of any fighter in the entire division, followed by Thiago Tavares (18) and John Howard (14).

HASENPFEFFER INCORPORATED: Shamil Gamzatov won an exciting decision over Eddie Gordon to remain undefeated at 12-0; he has now gone the distance twice in his MMA career. Originally competing at heavyweight and then light heavyweight, this bout was Gamzatov’s first at middleweight.

OUT LIKE A LIGHT: Rendering Herman Terrado unconscious in the first round, Magomedkerimov’s technical submission by rear-naked choke was the first of its kind in the WSOF-PFL. The other seven times a fighter has been put to sleep by choke in the organization, it has been by one of five different methods, ranging from an anaconda choke to Von Flue choke.

ET TU, BRUNO?: After defeating Sadibou Sy by decision, Bruno Santos has now gone the distance in his last 16 bouts. Santos finished two of his first three opponents as a professional but has gone to a decision in every fight since, including in all seven of his bouts inside Bellator MMA, the UFC and WSOF-PFL.

PAGING MISS UNIVERSE: Andre Luis Leal Lobato was originally announced as a split decision winner over Rex Harris. However, the athletic commission overseeing the event rectified a scoring mistake, took the victory away from Lobato and awarded the win to Harris during post-fight interviews. While a rare occurrence in MMA, it has happened before, perhaps most famously when Matt Serra was given a decision over Din Thomas at UFC 41. The New Jersey State Athletic Control Board later changed the result.