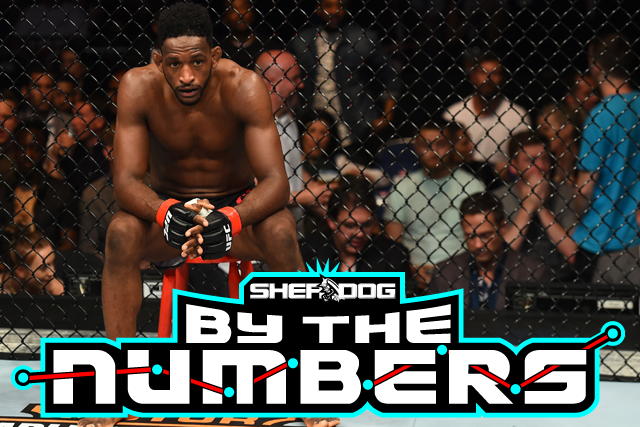 
Neil Magny is one of the most explosive fighters in the Ultimate Fighting Championship welterweight division. He holds notable victories over Carlos Condit, Johny Hendricks, Kelvin Gastelum as well as Hector Lombard, and probably needs just one or two more casualties to propel him into the top 5.

His next assignment is dangerous Argentinian Santiago Ponzinibbio. As he prepares to meet the hometown hero at the Parque Roca Arena in Buenos Aires, Argentina, take a look at the figures that have made Magny one of the dark horses of the division.

17: Years old when he started training at Miguel Torres’ gym. Magny started with jiu-jitsu and later on tried kickboxing.

2: Rounds needed to win in his professional MMA debut. Magny entered an event called C3 Fights 5 and stopped Nolan Norwood by kimura at 2:44.

1: Round given up in his first loss. In his second bout at Combat USA, Magny succumbed to a guillotine choke from Andrew Trace. The end came at 3:10.

3: Victories and one loss in his stint at The Ultimate Fighter 16. He decisioned Frank Camacho, Cameron Diffley and Bristol Marunde before getting stopped by Mike Ricci. Nonetheless, he made his way to the roster by virtue of his exciting performances.

3: Full rounds in his Octagon debut. Magny earned the judges’ decision despite a lackluster performance, which proved that he has so much room to grow. His next two fights didn’t help as he suffered the first back-to-back losses of his career.

1: Headliner in the UFC. Magny graced the main event of TUF Latin America 2 Finale opposite Kelvin Gastelum. It was an action-packed bout that earned for themselves Fight of the Night honors. In the end, Magny earned the nods of two out of three judges.

54: Significant strikes apiece for Magny and Gastelum, according to Fightmetric. The big difference was in the takedown department as Magny scored six as opposed to Gastelum’s two.

5: Victories in 2014. That year, Magny was one of the most active fighters on the roster, beating every opposition presented to him. He is tied with Roger Huerta for the most wins in a calendar year.

3: Performance of the Night awards. He earned $150,000 worth of performance bonuses following his exciting matches with Kunimoto, Lim and Hector Lombard.

148: Significant strikes against Lombard’s 60. Before knocking out the Cuban-Australian, Magny was way ahead on the scorecards, proving he can truly hang with the best. The fight with Lombard came after his split decision triumph over Gastelum.