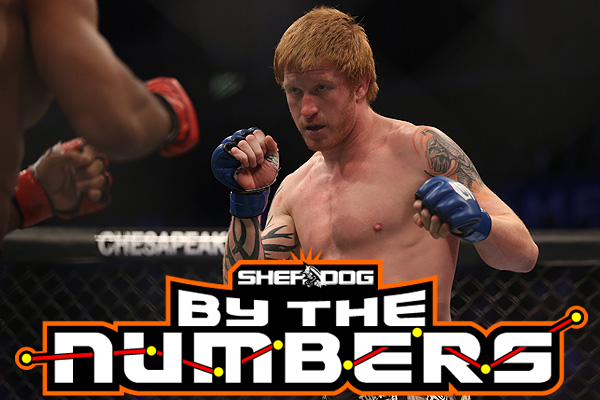 Ed Herman has probably seen better days in the Ultimate Fighting Championship, at one point a few fights away from middleweight title contention. Like his opponent at UFC Fight Night 138, Gian Villante, “Short Fuse” has dropped four of his last six bouts.

Will Herman submit his opponent early or will Villante catch him later? Fans will find out this Saturday at the Moncton Events Centre in Moncton, New Brunswick, Canada. Take a look at these figures and see what the Team Quest standout is capable of.

1: Round needed in his professional debut. Herman defeated Ryan Pope via armbar at a local event called Xtreme Ring Wars 2. The end came at 2:38.

3: Straight fights inside the first round to start his career. After his successful debut, Herman dropped his next bout to Shane Davis before setting up a rematch with Pope, whom he once again defeated by armbar. This time it was much easier as he finished the bout in 24 seconds, his fastest finish to date.

7: Straight victories after the loss to Davis. The rematch triumph over Pope sparked a winning streak that included triumphs over future Strikeforce standout Cory Devela, as well as Davis, who dealt him his first loss.

3: Full rounds with future UFC title challenger, Glover Teixeira. It was for the SportFight light heavyweight championship, and Herman won by unanimous decision.

16: Fights in the regional circuit before the UFC took notice. He amassed a record of 13-3, with wins over the likes of Teixeira, Dave Menne, Nick Thompson and Brian Ebersole.

2: Fellow contestants submitted to set the stage for a finals match with Kendall Grove at “The Ultimate Fighter” Season 3. He armbared Danny Abaddi in the elimination round and choked out Rory Singer in the semifinals before losing to Grove by unanimous decision.

1: Fight at Strikeforce. By this time he was already in the UFC but was allowed to be part of Strikeforce’s farewell show. Herman faced Ronaldo Souza when everyone else turned the match down. However, Herman lost by submission in the opening round.

1: Fight in Pancrase. He lost to Pride Fighting Championships veteran Kazuo Misaki by arm triangle in round 2.

8: Victories by armbar, mostly in regional tournaments. In the UFC, the jiu-jitsu black belt from Gracie Barra Portland tapped out Chris Price with his favorite submission in the first round.

34: Percent of his total strikes in the UFC were on the ground. Herman is known for his aggressive ground-and-pound, and has tallied 183 in the promotion so far.

73: Was his most significant strikes connected in a single bout, according to Fightmetric. It was against Trevor Smith at UFC on Fox 8.