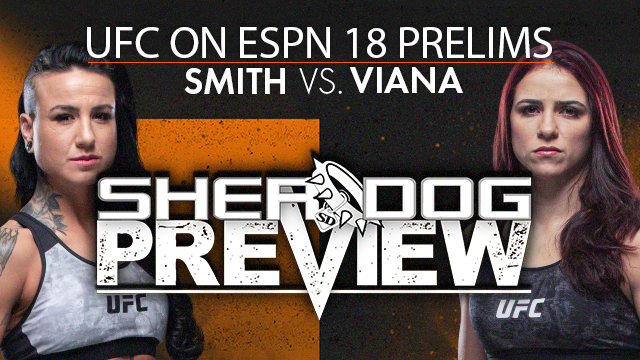 The Ultimate Fighting Championship on Saturday returns with UFC on ESPN 18, which features an intellectually intriguing slate of prelims.

From a talent perspective, Kai Kamaka looks like the clear standout, as he steps in on less than a week’s notice for a featherweight tilt against Jonathan Pearce. Beyond that, there are a number of fighters who have something to prove, either through long-standing flaws that need to be fixed or as unproven talents who need to show they can beat strong competition. That makes these fights interesting in their own way, and everyone involved certainly has the chance to put on a career-best performance and gain some momentum in the UFC.

Now to the preview for the UFC on ESPN 18 “Blaydes vs. Lewis” prelims:

This should help sort out some things about both fighters. Evans-Smith has some interesting skills as a former collegiate wrestler, but it has been a bit of a struggle to coalesce her game into a greater whole. Given that background, she would likely be at her best as more of a bully, but she has tried to reinvent herself as more of an all-terrain fighter in recent years, toeing a line between aimless at worst and well-rounded at best. A cut down to flyweight in 2018 seemed like it could help, but after losing to Andrea Lee in her second fight at 125 pounds, “Rebel Girl” is back at bantamweight here. Viana is a difficult fighter to gauge at this point based on her resume. She mostly overwhelmed non-athletes on the Brazilian scene, then was brought into the UFC as a featherweight and wound up overmatched herself against Megan Anderson. Of these two, Viana is certainly the fighter more committed to action, but it is impossible to tell where that will lead her. She could get the jump on Evans-Smith and outwrestle her, or she could just as easily get picked apart wading forward or find the American unmovable in the clinch. The pick is Viana via decision based solely on aggression, even though there is a wide range of possibilities in this one.