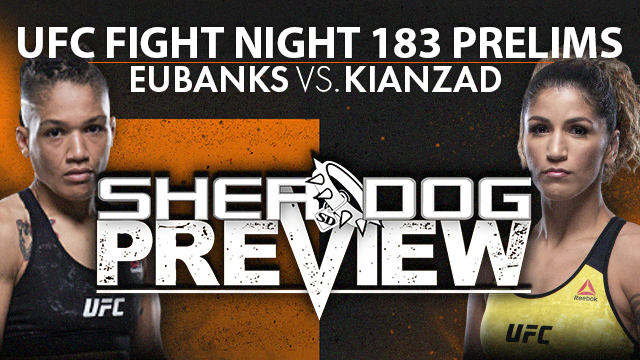 The Ultimate Fighting Championship did well to put all of its best stuff on the main card for UFC Fight Night 183—its last event of 2020—on Saturday at the UFC Apex in Las Vegas, but there are still plenty of interesting fights and fighters on this seven-bout slate of prelims. There is the usual run of debuts from Dana White’s Contender Series standouts like Drako Rodriguez, Tafon Nchukwi and Jimmy Flick. In between, there are some well-made bouts. Fighters like Sijara Eubanks and Deron Winn look to correct their issues, while Dalcha Lungiambula provides some intrigue by trying to cut down to 185 pounds. Add in that the overstuffed nature of this event means that it should move quickly, and this is an excellent appetizer heading into one of the best main cards of the year.

Now to the preview for the UFC Fight Night “Thompson vs. Neal” prelims:

This should be an interesting fight to help sort out things in the bantamweight division. Eubanks has clearly been improving from fight to fight, but it still feels like she is often fighting an uphill battle against her own limitations. A strong grappler, Eubanks seemed to find a new home at 125 pounds after having success on “The Ultimate Fighter,” but weight cut issues pulled her from the championship final and basically set the tone for that phase of her career. Eubanks managed to bully around smaller opponents much more effectively but consistently found herself unable to make weight. Back up at bantamweight, she has been putting in the work to round out her skills, but she has been hampered by her limited gas tank. After about a round and a half of fighting at a pace or trying to control her larger opponents, Eubanks begins to flag badly down the stretch. Things may yet fully click, but for now, “Sarj” is still clearly a work in progress. On the other side of the equation, Kianzad is riding a two-fight winning streak that probably felt like it would never come inside the UFC. After a winding road as a prospect, Kianzad got some tough matchups against Macy Chiasson and Julia Avila to kick off her Octagon career. Those two bouts exposed Kianzad’s fatal flaw—she cannot effectively deal with opponents who look to consistently apply pressure—but she has rebounded well with wins over Jessica-Rose Clark and Bethe Correia. Eubanks has the physicality to get her wrestling going early on, but this is a difficult fight to parse on paper. There will likely be a turn at some point as Eubanks tires herself out, but it is easier to bank on the fighter who is going to have at least a round in the bag before the situation starts to get muddier. Given Kianzad’s historical struggles, Eubanks may just be able to plod forward and stall the action later in the fight if it gets particularly dire. The pick is Eubanks via decision.