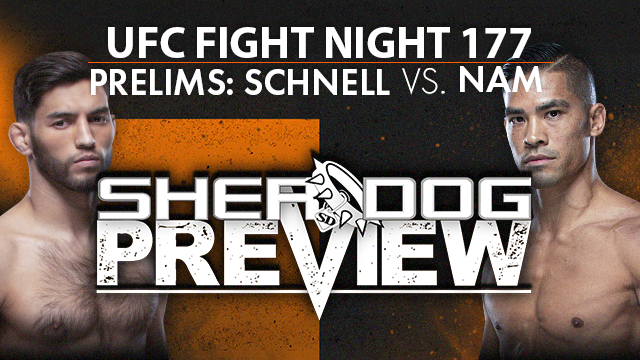 Given the thrown-together feel of most of these preliminary slates nowadays, this is a surprisingly strong lineup of undercard bouts. The flyweights get featured prelim status at UFC Fight Night 177 on Saturday at the UFC Apex in Las Vegas, as Matt Schnell meets Tyson Nam in what figures to be an enjoyable scrap at 125 pounds. There are also a number of intriguing prospects present, whether it be Matt Frevola’s lightweight tilt against Roosevelt Roberts or the opening match involving Sabina Mazo. Add in reliably entertaining veterans like Bobby Green and Frank Camacho, and this becomes one of the better pandemic-era cards in terms of pure depth, as long as it holds together.

Now to the preview for the UFC Fight Night “Waterson vs. Hill” prelims:

When he entered the UFC, Louisiana’s Schnell seemingly had all the tools to become a future flyweight title contender, but his first few bouts inside the Octagon exposed a shocking lack of durability for a 125-pound fighter. To his credit, “Danger” did well to address the issue and adapt, leveraging his long frame into a more patient striking style from range, all while keeping his impressively venomous submission skills in his back pocket. A four-fight winning streak helped establish Schnell in the UFC, but his December loss to Alexandre Pantoja did raise some concerns about his getting over the hump, as the Brazilian managed to knock out Schnell and bring those durability issues back to the front of everyone’s mind. He will look to rebound against Nam, who netted his long-overdue first win inside the UFC in June. He had firmly entered the globetrotting veteran phase of his career a few years back, so it was a pleasant surprise when he got the call as a late-notice replacement for a fight in late 2019. Nam’s style is well put-together, but his patience and reliance on counters makes for a difficult needle to thread at flyweight. While he typically hits the harder shots, he concedes volume to his opponents and can often lose rounds as a result. That is typically a concern given the lower finishing rates at flyweight, but the good news for the Hawaiian is that Schnell’s durability issues make this quite the winnable fight. The pick is Nam via first-round knockout.