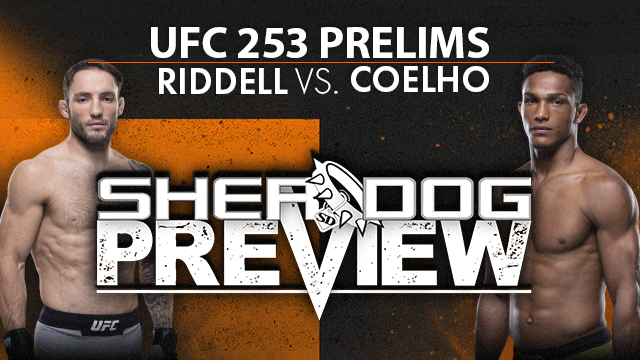 Sign up for ESPN+ right here, and you can then stream UFC 253 live on your smart TV, computer, phone, tablet or streaming device via the ESPN app.

The UFC 253 prelims on Saturday in the United Arab Emirates feel somewhat cobbled together, but there are still a number of fights worth watching. New Zealand supplies the violence with two of its top prospects: Brad Riddell serves as the A-side in the featured prelim, and Shane Young finds himself in a potential barnburner with newcomer Ludovit Klein. The rest of the undercard looks interesting, if only out of morbid curiosity. Diego Sanchez returns for whatever qualifies as an action fight for him nowadays, and there will likely be some sorting going on in the heavyweight and light heavyweight divisions, which always provides entertainment.

Now to the preview for the UFC 253 “Adesanya vs. Costa” prelims:

He may not have quite the ceiling of Israel Adesanya, but New Zealand’s Riddell is the latest City Kickboxing product worth getting excited about. Riddell keeps surpassing expectations just like Adesanya did. There were questions about Riddell’s wrestling defense, but he handled the task against Jamie Mullarkey and won what wound up as a blood-and-guts war. There were also questions about his ability to hang with another power puncher in Magomed Mustafaev, but Riddell did well enough there that the latter suddenly decided to become a wrestler himself. There is not much built-in defense in Riddell’s style or his stocky frame, but that may just mean that “Quake” turns out to be the next must-watch action fighter at lightweight. Riddell takes on Brazil’s Coelho, an interesting prospect in his own right who is still figuring out things. Coelho racked up a ton of wins prior to his UFC run, but only a few came against any real level of competition. As a result, while he has plenty of promising skills, he is still trying to find an approach against opponents who will not go away so easily. Thus far, that has meant relying on his wrestling. While Coelho’s lack of defensive awareness meant he still got tapped by Alexander Yakovlev, he did control his last fight—a decision win over Rodrigo Vargas in August 2019. Coelho could have some success with that approach, but Riddell has shown enough savvy and has enough physical power that it will be hard for the Brazilian to balance damage and control if he takes this to the mat. As such, there is not really a winning approach. Coelho can control the fight, but Riddell is still likely to cause enough damage in the standup to win rounds; and if Coelho tries to get his offense going on the ground, it should give Riddell the opening to get the fight back to the feet. Coelho has enough talent to succeed in making this fight ugly, but a win is difficult to envision. This may not wind up as the showcase fight it seems meant to be, but the pick is Riddell via decision.