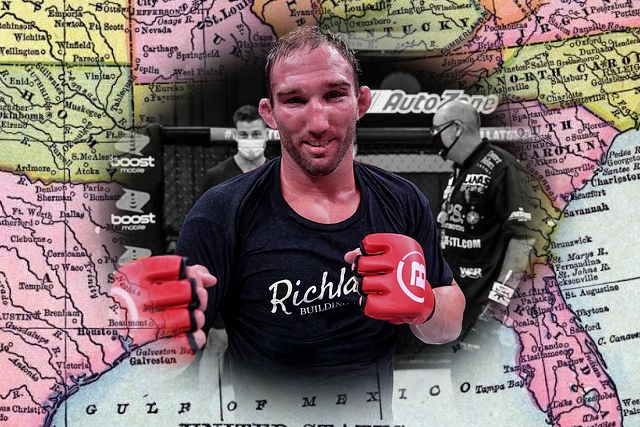 
In 2016, Sherdog.com debuted a weekly series titled “MMA’s Greats of the States.” As the title implies, each edition highlighted the most accomplished mixed martial artist from one of the 50 states. A lot has happened in five years, and some all-time greats have been overtaken — or are looking over their shoulders, at least. It’s time to update the series. As in the original series, fighters will be paired with the state they represent most fully, by their own reckoning as well as in the eye of the public. As Sherdog contributor Mike Sloan, creator of the original series, pointed out: Robbie Lawler may have been born in San Diego, but few would call him a Californian.

For a state that figured prominently in the early, outlaw bloodsport era of the Ultimate Fighting Championship — five of the first 20 UFC events were held there — “The Heart of Dixie” has been only a modest contributor to the MMA talent pool over the years. Eric “Butterbean” Esch is a one-of-a-kind character and a combat sports legend in his own way, but if he’s one of the three greatest fighters from your state, that says something.

Salter was the best of a shallow field in 2016, a tough grappler who had seen some success in the UFC and Strikeforce before settling down as a rising middleweight in Bellator MMA. Since the original article, however, Salter has put miles between himself and the pack, going 7-1 and establishing himself as a top contender and the division’s all-time submission leader. If Salter manages to wrest the belt from Gegard Mousasi this year, he may have this category locked down for a long, long time.

The other notable development since the original article is the rise of Walt Harris. Five years ago, “The Big Ticket” wouldn’t even have pinged author Mike Sloan’s radar, as a gifted but green heavyweight who had run roughshod over local competition but was 0-3 in the UFC across two different stints with the promotion. Since then, however, Harris is 6-5 with one no contest in the Octagon, and while he has hit a ceiling against the elite of the division, he scored a crushing knockout of Alexey Oleynik in just 12 seconds at UFC on ESPN 4 in 2019. A definitive stoppage of a Top 10 fighter is more than enough to bring the affable Alabaman into second place.