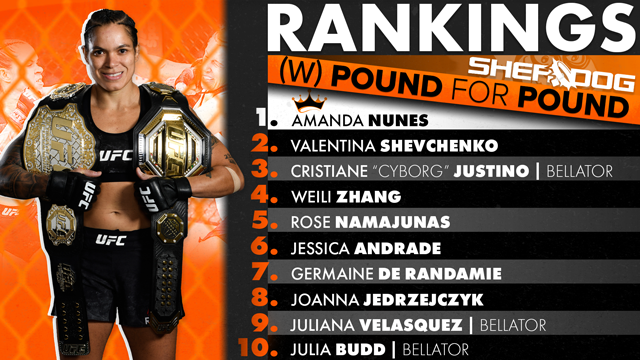 
After briefly contemplating retirement in 2020, Amanda Nunes looked inevitable as ever at UFC 259.

The two-division women’s GOAT quickly overwhelmed Megan Anderson in Saturday’s co-main event at the UFC Apex in Las Vegas, earning her 12th consecutive victory within the Las Vegas-based promotion. About the only suspense involved in the featherweight title defense was how she would put Anderson away, and Nunes put a bow on the victory with a nifty reverse triangle armbar submission just 2:03 into Round 1.

Nunes has made it clear that motherhood has provided her with new motivation in her MMA career, and that’s bad news for the rest of the women at 145 and 135 pounds – because her two-division dominance had already been well established before Raegan Ann Nunes came into the world.

Nunes extended her winning streak to 12 at UFC 259, where she ran roughshod over Megan Anderson en route to a reverse triangle armbar submission at the 2:03 mark of Round 1. The consensus women’s GOAT now has three wins in 145-pound title bouts to her credit, but there doesn’t appear to be any worthwhile challenges in that division at the moment. With retirement no longer on her mind after the birth of her daughter, it’s more likely that “Lioness” returns to 135 pounds to defend her bantamweight crown in her next Octagon appearance.

It’s gotten to the point where if Shevchenko loses a round, her opponent can claim a moral victory. Although Jennifer Maia banked the second frame in their co-main event bout at UFC 255, the rest of the contest was all Shevchenko, as “Bullet” cruised to a clear-cut unanimous decision title to retain her flyweight crown. Shevchenko has won six straight fights since moving to 125 pounds and now eyes a showdown against Jessica Andrade at UFC 261.

Justino’s first featherweight title defense in Bellator was a breeze, as she dominated Arlene Blencowe en route to a rear-naked choke victory in the second round of the Bellator 249 headliner — the first submission triumph of the powerful Brazilian’s MMA career. “Cyborg” has won three straight contests since her upset loss to Amanda Nunes at UFC 232 and appears poised for a dominant reign as 145-pound champ in the California-based promotion.

One bout removed from a 42-second stoppage of Jessica Andrade, Zhang showcased an ability to prevail in a battle of attrition, as she outdueled Joanna Jedrzejczyk in a five-round classic to retain the strawweight crown in the UFC 248 co-main event. Zhang extended her winning streak to 21 thanks to superior punching power that left a grotesque hematoma on Jedrzejczyk’s forehead. Zhang’s victory was all the more impressive considering that her camp was altered due to coronavirus concerns in her homeland of China. After more than a year hiatus, Zhang is expected to defend her crown against Rose Namajunas at UFC 261.

A devastating slam KO defeat to Jessica Andrade at UFC 237 had Namajunas contemplating retirement, but ultimately “Thug” Rose decided against calling it a career. The former champion made a triumphant return to the Octagon at UFC 251, where she racked up an early lead on the scorecards and held off a hard-charging Andrade down the stretch for a split-decision triumph at “Fight Island” in Abu Dhabi. With the victory, Namajunas earned herself a shot at reigning 115-pound champion Weili Zhang at UFC 261.

Andrade became the first woman to earn Octagon victories in three different weight classes at UFC Fight Night 180, as she dispatched former flyweight title challenger Katlyn Chookagian with body punches 4:55 into the opening round of their co-main event encounter in Abu Dhabi on Oct. 17. With an impressive victory in her 125-pound debut, the former strawweight queen secured a shot at reiging champion Valentina Shevchenko at UFC 261.

De Randamie showcased a new element to her game at UFC on ESPN 16, as she submitted Julianna Pena with a guillotine choke in the third round of their bantamweight encounter at the Flash Forum in Abu Dhabi on Oct. 3. It was the first submission victory ever for the Dutch kickboxer, who rebounded from a five-round defeat to Amanda Nunes in a title bout at UFC 245 last December. De Randamie has won six of her eight promotional appearances, with her only two defeats both coming at the hands of Nunes.

In a championship matchup of undefeated fighters, Velasquez ended Ilima-Lei Macfarlane’s flyweight reign with a clear-cut five-round verdict in the Bellator 254 headliner on Dec. 10. The Brazilian judoka has been victorious in her first six promotional appearances and looks destined for a future showdown with Macfarlane training partner and former UFC title challenger Liz Carmouche. A rematch with Macfarlane or a clash with ex-Invicta champ Vanessa Porto are also possibilities.