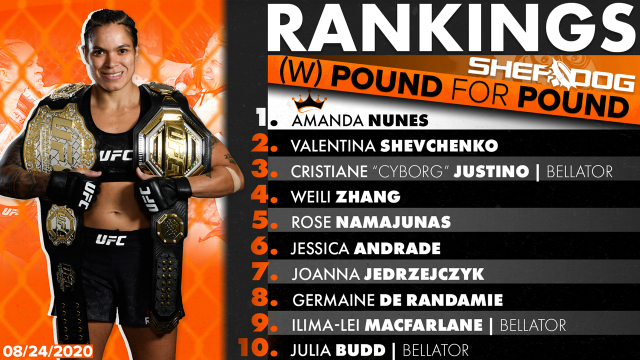 
When she’s not facing Cristiane Justino, Julia Budd is still a force to be reckoned with at 145 pounds.

The former featherweight queen rebounded from a fourth-round TKO loss to “Cyborg” in January, as she cruised to a unanimous verdict over Jessy Miele in the Bellator 244 co-main event this past Friday. That makes 12 victories in her last 13 professional outings for “The Jewel,” who is undoubtedly eyeing an eventual rematch with Justino. For now, Budd stays put at No. 10 in our latest female pound-for-pound poll.

Nunes was completely dominant against Felicia Spencer in the UFC 250 headliner, winning a lopsided unanimous verdict that wasn’t as close as the judges’ scorecards (50-44, 50-44, 50-45) indicated. That makes 11 consecutive triumphs for Nunes, who joins Daniel Cormier and Henry Cejudo as the only two UFC fighters two successfully defend titles in two different weight classes. Retirement talks proved to be premature for “Lioness,” who will return for a another 145-pound title defense against Megan Anderson at UFC 256 on Dec. 12.

Shevchenko continues to look unstoppable in the UFC women’s flyweight division. “Bullet” absolutely overwhelmed Katlyn Chookagian in the UFC 247 co-main event in Houston, eventually trapping her opponent in a mounted crucifix and raining down strikes for a technical knockout stoppage at the 1:03 mark of the third round. Shevchenko has won five straight since dropping a closely-contested split verdict to Amanda Nunes at UFC 215. Her next title defense is will come against Jennifer Maia at UFC 255 on Nov. 21..

Justino looked quite comfortable in her new home, as she overwhelmed Julia Budd for a fourth-round technical knockout victory in the Bellator 238 headliner at the Forum in Inglewood, Calif., on Jan. 25. The victory gives “Cyborg” championships in four major organizations over the course of her career – Bellator, UFC, Invicta FC and Strikeforce – and re-affirms her position as one of the greatest female mixed martial artists of all time. As has been the case throughout her career, the heavy-handed Brazilian could soon find the pickings slim when it comes to challengers in Bellator’s 145-pound division.

One bout removed from a 42-second stoppage of Jessica Andrade, Zhang showcased an ability to prevail in a battle of attrition, as she outdueled Joanna Jedrzejczyk in a five-round classic to retain the strawweight crown in the UFC 248 co-main event. Zhang extended her winning streak to 21 thanks to superior punching power that left a grotesque hematoma on Jedrzejczyk’s forehead. Zhang’s victory was all the more impressive considering that her camp was altered due to coronavirus concerns in her homeland of China. Zhang and Jedrzejczyk could be destined for a rematch down the road, but it will be difficult to top their first meeting, which ranks as perhaps the greatest female fight of all-time.

A devastating slam KO defeat to Jessica Andrade at UFC 237 had Namajunas contemplating retirement, but ultimately “Thug” Rose decided against calling it a career. The former champion made a triumphant return to the Octagon at UFC 251, where she racked up on early lead on the scorecards and held off a hard-charging Andrade down the stretch for a split-decision triumph at “Fight Island” in Abu Dhabi. While a trilogy with Andrade could be in store someday, Namajunas likely earned herself a shot at reigning 115-pound champion Weili Zhang.

Andrade struggled to solve the Rose Namajunas puzzle for two rounds at UFC 251, but “Bate Estaca” made things interesting with a rally in the third round of their strawweight rematch in Abu Dhabi. Unfortunately for Andrade it wasn’t enough, as the Brazilian dropped a split decision to Namajunas in contest that earned “Fight of the Night” honors. After winning seven of eight UFC appearances June 2016 to May 2019, the Brazilian has dropped back-to-back fights in the Octagon. Andrade will try her hand at 125 pounds when she meets Jessica Eye at a UFC event on Oct. 17.

De Randamie certainly had her moments against Amanda Nunes at UFC 245, but a lack of consistent takedown defense ultimately proved to be her undoing. “The Iron Lady” had some success on the feet and even threatened with a few submissions, but she was largely controlled on the canvas in losing a unanimous decision at the T-Mobile Arena in Las Vegas. A clash with Julianna Pena is in the works for Oct. 3.

Macfarlane was rarely threatened in her latest title defense, as she cruised to a unanimous decision over Kate Jackson in the Bellator 236 headliner at Neal S. Blaisdell Arena in Honolulu. Macfarlane was on the verge of a finish in the fourth and fifth rounds, but Jackson relied on her tenacity to survive until the final bell. Macfarlane now has four successful championship defenses to her credit since winning the inaugural 125-pound belt in November 2017. Interesting future challenges loom in the form of streaking flyweight Juliana Velasquez along with recently-signed training partner — and two-division UFC title challenger — Liz Carmouche.