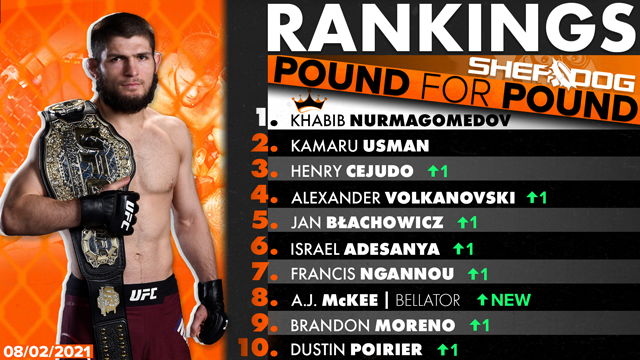 
A.J. McKee has been building to this moment since his Bellator MMA debut more than six years ago.

McKee completed an impressive run through the Bellator featherweight grand prix with a first-round submission of Patricio Freire in the Bellator 263 headliner at the Forum in Inglewood, Calif., on Saturday night. Now undefeated in 18 professional appearances, “Mercenary” takes over Freire’s No. 9 ranking in Sherdog.com’s latest pound-for-pound update. With Freire still holding Bellator’s lightweight belt, a rematch could be in store at a different weight class, which would also have serious pound-for-pound implications down the road. For now, though, it’s time to welcome McKee to elite company, an honor that is well deserved.

In a major bit of housekeeping, Jon Jones exits the pound-for-pound rankings after reaching the 18-month inactivity threshold. “Bones” hasn’t competed since besting Dominick Reyes at UFC 247 in February 2020 and has indicated that he might not fight until 2022 at the earliest. Until that day arrives, Jones’ time as a pound-for-pound stalwart has ended.

Maybe 30-0 won’t become a reality, but Nurmagomedov put about a perfect a stamp as one could on his mixed martial arts career with a second-round submission of Justin Gaethje in the UFC 254 headliner on Oct. 24, 2020. “The Eagle” withstood some heavy artillery from his opponent — including some powerful low kicks — while continuing to apply constant pressure. Eventually, Gaethje wilted on the canvas, as Nurmagomedov choked him unconscious at the 1:34 mark of Round 2. In the aftermath, Nurmagomedov announced his retirement, leaving behind a legacy that includes a 13-0 UFC mark and a record-tying four championship victories in the brutal lightweight division. In March, Dana White and the promotion finally accepted Nurmagomedov’s retirement and vacated the 155-pound belt. If his retirement holds, Nurmagomedov’s rankings eligibility will expire on April 24, 2022.

Usman earned his 14th consecutive Octagon triumph at UFC 261, as he knocked out Jorge Masvidal in the second round of their rematch at Vystar Veterans Memorial Arena in Jacksonville, Florida, on April 24. After taking a five-round verdict over “Gamebred” in July 2020, Masvidal brought their rivalry to an emphatic close with a powerful right hand. With the second-longest winning streak in UFC history in tow, Usman can look forward to another rematch, this time at UFC 268 against Colby Covington, whom he defeated via fifth-round TKO at UFC 245.

Cejudo became only the second fighter in promotion history to successfully defend titles in two divisions at UFC 249 when he defeated Dominick Cruz via second-round technical knockout in the evening’s co-main event at VyStar Veterans’ Memorial Arena in Jacksonville, Florida. After the victory, the Olympic gold medalist made a surprising retirement announcement, citing a desire to start a family. Retirements often don’t last in MMA, but if it holds up, “Triple C” ends his career with a six-fight winning streak that includes triumphs over Demetrious Johnson, T.J. Dillashaw, Marlon Moraes and Cruz. If he isn’t booked for a fight, Cejudo’s rankings eligibility will expire on Nov. 9.

Volkanovski improved to 2-0 against Max Holloway at UFC 251, but victory in the rematch came by a much slimmer margin than it did in their first meeting. After Holloway rocked the Australian featherweight champion at the end of Rounds 1 and 2 to take an early lead on the scorecards, Volkanovski finished strong over the bout’s final 15 minutes to earn a contentious split-decision triumph in Abu Dhabi. That makes nine consecutive UFC victories and 19 straight professional triumphs overall for the City Kickboxing representative. A showdown with Brian Ortega that was originally set for UFC 260 has been postponed after Volkanovski tested positive for COVID-19. That bout has been rescheduled for the UFC 266 headliner on Sept. 25.

Ever the underdog, Blachowicz once again silenced the doubters at UFC 259, where he ended Israel Adesanya’s dreams of two-division dominance with a unanimous decision triumph at the UFC Apex in Las Vegas on March 6. After beginning his promotional tenure with an underwhelming 2-4 mark, the Polish standout has won nine of his last 10 outings, besting the likes of Adesanya, Dominick Reyes, Corey Anderson, Ronaldo Souza, Luke Rockhold and Jared Cannonier, to name a few. A showdown with surging veteran contender Glover Teixeira awaits next at UFC 267 on Oct. 30.

After failing in his bid to become a two-division champion this past March, Adesanya showed the world that he still reigns supreme at middleweight, as he cruised to a five-round verdict over Marvin Vettori in the UFC 263 headliner at Gila River Arena in Glendale, Ariz., on June 12. It was a much more decisive triumph than their first meeting, when “The Last Stylebender” captured a split verdict over his Italian rival at UFC on Fox 29 in April 2018. With 10 consecutive middleweight triumphs under his belt, the City Kickboxing stalwart now turns his attention to a rematch with ex-champ Robert Whittaker.

Ngannou brought the same ferocious knockout power into his rematch with Stipe Miocic at UFC 260, but improved takedown defense allowed him to use it much more effectively. The end result was a second-round knockout victory that made “The Predator” the 17th heavyweight champion in UFC history. The Cameroonian-born Frenchman has laid waste to some of the division’s best during his run to the top and if the promotion can make it happen, a victory over light heavyweight GOAT Jon Jones would only add to his overall legacy. For now, Ngannou will wait on the sidelines as Derrick Lewis and Ciryl Gane square off for interim heavyweight gold at UFC 265.

McKee had a star-making performance at Bellator 263, as he rocked Patricio Freire with a head kick and then rendered his opponent unconscious with a guillotine choke in their headlining encounter at The Forum in Inglewood, Calif., on July 31. Not only does McKee claim featherweight gold, but he earned a cool $1 million for making it through the promotion’s 145-pound bracket. McKee finished all four of his opponents — Freire, Darrion Caldwell, Derek Campos and Georgi Karakhanyan — in the grand prix and now looks poised to be one of the sport’s top featherweights for years to come.

Moreno made history at UFC 263, becoming the first Mexican-born champion in promotion history with a third-round submission of Deiveson Figueiredo at the Gila River Arena in Glendale, Ariz., on June 12. Moreno was much more dominant in the rematch after battling the Brazilian to a majority draw in their first meeting at UFC 256. “The Assassin Baby” is unbeaten in six Octagon appearances since his initial release from the promotion.

Though it may not have ended exactly as he would have liked it, there’s no question that Poirier was impressive during the opening round of his trilogy bout against Conor McGregor at UFC 264. Prior to the leg injury suffered by McGregor that prompted a doctor stoppage, “The Diamond” was on the verge of securing a finish by virtue of his heavy ground-and-pound from above. While a fourth meeting with the Irishman may yet be in the cards, Poirier has more pressing matters at hand: a shot at current 155-pound champion Charles Oliveira.