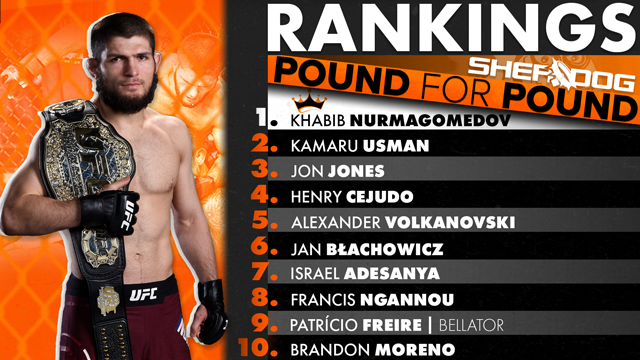 
Dustin Poirier didn’t get the closure he might have liked against Conor McGregor at UFC 264, but a win is a win.

And let’s be honest: Poirier was nearly on the verge of a stoppage in Round 1 thanks to a vicious barrage of ground-and-pound moments before he allowed McGregor to return to his feet, setting the stage for the Irishman’s awkward step and leg injury that brought an unceremonious end to the fight. Some may argue that McGregor still had plenty left to offer in the trilogy bout if the bad break hadn’t occurred, but over their last two-plus rounds together in the cage in 2021, “The Diamond” has clearly looked to be the better man.

Dating back to 2017, Poirier has lost just once in 10 appearances in what is arguably the sport’s toughest division – and that setback came against a pound-for-pound great in Khabib Nurmagomedov. His résumé during that time includes wins over McGregor (twice), Justin Gaethje, Max Holloway, Dan Hooker and a better version of Eddie Alvarez than the one who resides in One Championship. For now, that’s enough to propel the American Top Team product ahead of ex-heavyweight champ Stipe Miocic and into the 11th spot in our latest pound-for-pound rankings. If he beats Charles Oliveira in the title bout that’s likely to come, his ranking could be even higher in a future rankings update.

Maybe 30-0 won’t become a reality, but Nurmagomedov put about a perfect a stamp as one could on his mixed martial arts career with a second-round submission of Justin Gaethje in the UFC 254 headliner on Oct. 24. “The Eagle” withstood some heavy artillery from his opponent — including some powerful low kicks — while continuing to apply constant pressure. Eventually, Gaethje wilted on the canvas, as Nurmagomedov choked him unconscious at the 1:34 mark of Round 2. In the aftermath, Nurmagomedov announced his retirement, leaving behind a legacy that includes a 13-0 UFC mark and a record-tying four championship victories in the brutal lightweight division. In March, Dana White and the promotion finally accepted Nurmagomedov’s retirement and vacated the 155-pound belt. If his retirement holds, Nurmagomedov’s rankings eligibility will expire on April 24, 2022.

Usman earned his 14th consecutive Octagon triumph at UFC 261, as he knocked out Jorge Masvidal in the second round of their rematch at Vystar Veterans Memorial Arena in Jacksonville, Florida, on April 24. After taking a five-round verdict over “Gamebred” in July 2020, Masvidal brought their rivalry to an emphatic close with a powerful right hand. With the second-longest winning streak in UFC history in tow, Usman can look forward to another rematch, this time against Colby Covington, whom he defeated via fifth-round TKO at UFC 245.

The competition is catching up to Jones, but it hasn’t surpassed him just yet. “Bones” survived by the skin of his teeth at UFC 247, as he edged Dominick Reyes in a unanimous verdict in the evening’s headliner at the Toyota Center in Houston. In a fight that many observers scored in favor of Reyes, Jones was able to sway the judges’ scorecards with consistent forward pressure and a strong push in the championship rounds. The hard-fought triumph gives Jones 14 victories in championship fights, the most in the history of the Las Vegas-based promotion. After some public back-and-forth with the UFC and Dana White, Jones vacated his light heavyweight strap in August, signaling a new era for the division. A move to heavyweight looms, though negotiations for that transition remain tense. Due to his long stretch of inactivity, Jones’ ranking eligibility will expire on Aug. 8.

Cejudo became only the second fighter in promotion history to successfully defend titles in two divisions at UFC 249 when he defeated Dominick Cruz via second-round technical knockout in the evening’s co-main event at VyStar Veterans’ Memorial Arena in Jacksonville, Florida. After the victory, the Olympic gold medalist made a surprising retirement announcement, citing a desire to start a family. Retirements often don’t last in MMA, but if it holds up, “Triple C” ends his career with a six-fight winning streak that includes triumphs over Demetrious Johnson, T.J. Dillashaw, Marlon Moraes and Cruz. If he isn’t booked for a fight, Cejudo’s rankings eligibility will expire on Nov. 9.

Volkanovski improved to 2-0 against Max Holloway at UFC 251, but victory in the rematch came by a much slimmer margin than it did in their first meeting. After Holloway rocked the Australian featherweight champion at the end of Rounds 1 and 2 to take an early lead on the scorecards, Volkanovski finished strong over the bout’s final 15 minutes to earn a contentious split decision in Abu Dhabi. That makes nine consecutive UFC victories and 19 straight professional triumphs overall for the City Kickboxing representative. A showdown with Brian Ortega that was originally set for UFC 260 has been postponed after Volkanovski tested positive for COVID-19. That bout figures to be delayed even further, as Volkanovski and Ortega have been tabbed as coaches on “The Ultimate Fighter 29.”

Ever the underdog, Blachowicz once again silenced the doubters at UFC 259, where he ended Israel Adesanya’s dreams of two-division dominance with a unanimous decision triumph at the UFC Apex in Las Vegas on March 6. After beginning his promotional tenure with an underwhelming 2-4 mark, the Polish standout has won nine of his last 10 outings, besting the likes of Adesanya, Dominick Reyes, Corey Anderson, Ronaldo Souza, Luke Rockhold and Jared Cannonier, to name a few. A showdown with surging veteran contender Glover Teixeira awaits next at UFC 267 on Oct 30.

After failing in his bid to become a two-division champion this past March, Adesanya showed the world that he still reigns supreme at middleweight, as he cruised to a five-round verdict over Marvin Vettori in the UFC 263 headliner at Gila River Arena in Glendale, Ariz., on June 12. It was a much more decisive triumph than their first meeting, when “The Last Stylebender” captured a split verdict over his Italian rival at UFC on Fox 29 in April 2018. With 10 consecutive middleweight triumphs under his belt, the City Kickboxing stalwart now turns his attention to a rematch with ex-champ Robert Whittaker.

Ngannou brought the same ferocious knockout power into his rematch with Stipe Miocic at UFC 260, but improved takedown defense allowed him to use it much more effectively. The end result was a second-round knockout victory that made “The Predator” the 17th heavyweight champion in UFC history. The Cameroonian-born Frenchman has laid waste to some of the division’s best during his run to the top and if the promotion can make it happen, a victory over light heavyweight GOAT Jon Jones would only add to his overall legacy.

After using the entire five rounds to defeat Emmanuel Sanchez in their first meeting in November 2018, Freire blasted the Roufusport product with a left hook and choked him out 3:35 into the opening round of their clash in the Bellator 255 headliner on April 2 at Mohegan Sun Arena in Uncasville, Conn. That makes seven consecutive wins for the Bellator’s reigning 145- and 155-pound champion, who advances to the finals of the promotion’s featherweight grand prix for an enticing matchup against the undefeated A.J. McKee at Bellator 263 on July 31.

Moreno made history at UFC 263, becoming the first Mexican-born champion in promotion his-tory with a third-round submission of Deiveson Figueiredo at the Gila River Arena in Glendale, Ariz., on June 12. Moreno was much more dominant in the rematch after battling the Brazilian to a majority draw in their first meeting at UFC 256. “The Assassin Baby” is unbeaten in six Octagon appearances since his initial release from the promotion.