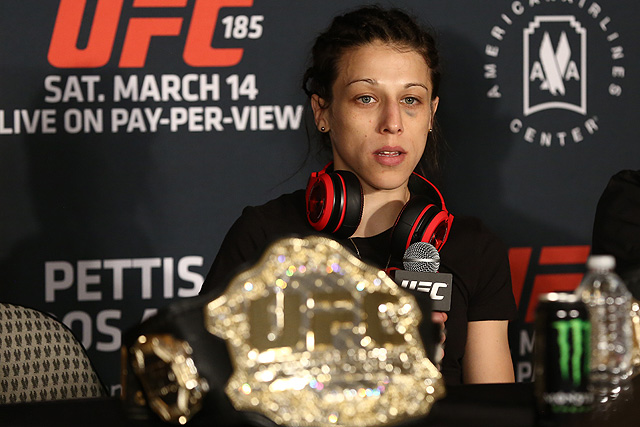 Less than two weeks after the debut of the Sherdog.com women’s pound-for-pound top 10 was published, there was a major shake-up in the ranks. At UFC 185, Joanna Jedrzejczyk blew out Carla Esparza in a second-round stoppage to become the organization’s second strawweight champion just three months after the division crowned its first queen. The victory boosted Jedrzejczyk up five spots to No. 3, while Esparza dropped one place to No. 9.

However, it could be some time before there is movement in these rankings again. Only two of the sport’s female pound-for-pounders have upcoming bouts scheduled: No. 8 Claudia Gadelha will attempt to earn a rematch with Jedrzejczyk when she faces Aisling Daly on April 11 in Poland, while No. 10 Herica Tiburcio will put her Invicta Fighting Championships atomweight belt on the line against Japanese import Ayaka Hamasaki come July.

What superlatives remain to heap upon Rousey? At 28 years old and with just 11 professional bouts on her ledger, the former Olympic judoka has decimated the women’s bantamweight division en route to becoming MMA’s lone female superstar. Even before her 14-second blowout of Cat Zingano at UFC 184, comparisons were being made between Rousey and Mike Tyson due to the brief and lopsided nature of her title defenses. Unlike Tyson in his prime, however, there are no bigger names or belts for Rousey to chase. With all viable contenders exhausted at the moment, the focus has returned to an oft-discussed super-fight between Rousey and longtime 145-pound queen Cristiane “Cyborg” Justino. For now, Rousey will take a break from the cage in order to star in an as-yet-unannounced film.

Since bursting into the MMA consciousness in 2008, the woman known as “Cyborg” has lived up to her name by terminating 10 straight opponents, nine via knockout. In fact, the only setback of Justino’s stateside career came in 2011, when the then-Strikeforce champion was suspended for one year after testing positive for anabolic steroids. The 29-year-old Brazilian returned in April 2013 and has since captured the Invicta featherweight belt, which she defended on Feb. 27 by punching out Charmaine Tweet in 46 seconds. All eyes have turned to a potential bout between Justino and UFC star Ronda Rousey, though it remains unlikely that the hulking “Cyborg” will be capable of cutting to 135 pounds.

Jedrzejczyk served notice to the women’s strawweight division at UFC 185 by obliterating “The Ultimate Fighter 20” winner Carla Esparza to become the company’s second 115-pound champion. In a fight which was never competitive, the undefeated striker pummeled Esparza from pillar to post, unleashing her muay Thai arsenal to score a vicious second-round stoppage. The 27-year-old from Olsztyn, Poland, will not get to compete on the April 11 card in her home country but will no doubt be watching closely as former adversary Claudia Gadelha squares off against Aisling Daly.

While the UFC has snapped up much of the world’s top 115-pound talent to fill its newest division, one of the finest fighters in the weight class resides in rival organization World Series of Fighting. “Jag” captured the WSOF strawweight title in June by pummeling Emi Fujino across five rounds and then defended her belt against Kalindra Faria in a similarly lopsided decision. The American Top Team product’s résumé includes a pair of victories over former pound-for-pound queen Megumi Fujii, as well as a 2011 win against former UFC ace Carla Esparza.

Zingano’s grit and determination inside the cage helped her score come-from-behind wins against Miesha Tate and Amanda Nunes to become the UFC’s top bantamweight contender. The same qualities helped the Colorado native return to action following ACL surgery and the death of her husband in 2014. However, in her long-awaited title shot against Ronda Rousey at UFC 184, “Alpha Cat” had little chance to display her skills or resolve, as a 14-second armbar dashed Zingano’s championship hopes. The brief bout illustrated far less about Zingano -- who entered the bout unbeaten at 9-0 with eight finishes -- than it did the gap between Rousey and even the best of the rest at 135 pounds.

Every great champion needs a foil, and Tate is the only woman in the bantamweight division who can legitimately call herself a rival to Ronda Rousey. Though winless in two outings against the UFC superstar, “Cupcake” has given Rousey her stiffest opposition to date; she remains the only one of Rousey’s 11 opponents to make it out of the first round. While another title clash for Tate remains a hard sell, the 28-year-old has been busy making her case, earning decision wins against Sara McMann, Liz Carmouche and Rin Nakai in the past 12 months.

Honchak has been nothing but dominant since winning the Invicta flyweight belt -- a little too dominant, perhaps. “The Little Warrior” drew criticism with her latest title defense, a November rout of Takayo Hashi which saw Honchak outwork the Japanese vet in the clinch for the better part of five rounds. Regardless of her tactics, there can be no denying the Pat Miletich student’s results: Honchak is currently riding a nine-fight winning streak and has not suffered a loss since September 2010.

Weight issues prevented Gadelha from competing on Season 20 of “The Ultimate Fighter,” but the Brazilian jiu-jitsu black belt from Nova Uniao never figured to be far removed from contention for the UFC strawweight title. However, the 26-year-old Brazilian was derailed in December, dropping a split decision to Joanna Jedrzejczyk in what proved to be a No. 1 contender bout. “Claudinha” will attempt to rebound from her first career setback and earn a rematch with new champion Jedrzejczyk on April 11, when she will meet durable Irish vet Aisling Daly in Poland.

Esparza’s collegiate wrestling base propelled her through “The Ultimate Fighter” Season 20 and helped her defeat Rose Namajunas to become the inaugural UFC women’s strawweight champion, but it did not help her at all against Joanna Jedrzejczyk at UFC 185. Unable to bring the polish striker to the ground, Esparza suffered through an early candidate for “Beatdown of the Year” before being punched senseless in the second round. It was the 27-year-old’s first knockout loss in 13 bouts and snapped a five-fight winning streak which saw the “Cookie Monster” take out the likes of Felice Herrig and Bec Rawlings.

The youngest and lightest fighter to join the pound-for-pound list, pint-sized powerhouse Tiburcio made a name for herself in December by dethroning Invicta 105-pound champ Michelle Waterson. In a shocking upset, Tiburcio forced the “Karate Hottie” to tap to a third-round guillotine choke and claimed the atomweight title at just 21 years old. The Brazilian will risk her belt for the first time on July 10 against former Deep Jewels champ Ayaka Hamasaki.