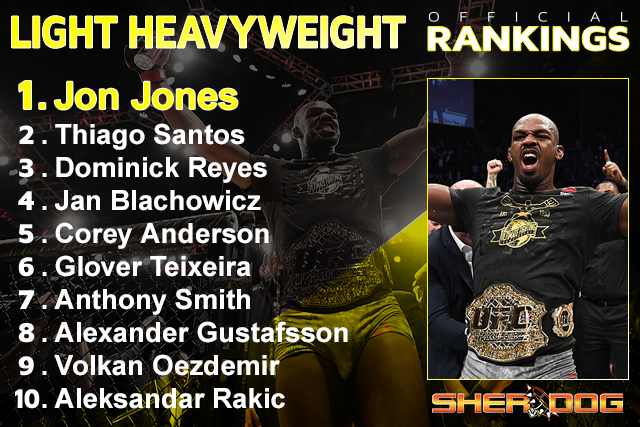 The competition is catching up to Jones, but it hasn’t surpassed him just yet. “Bones” survived by the skin of his teeth at UFC 247, as he edged Dominick Reyes in a unanimous verdict in the evening’s headliner at the Toyota Center in Houston. In a fight that many observers scored in favor of Reyes, Jones was able to sway the judges’ scorecards with consistent forward pressure and a strong push in the championship rounds. The hard-fought triumph gives Jones 14 victories in championship fights, the most in the history of the Las Vegas-based promotion. Seemingly unmotivated by the thought of another 205-pound title defense, Jones has engaged in a very public negotiation with the UFC over a possible heavyweight fight with Francis Ngannou. The progress thus far has not been promising, as Jones went on social media to say he has vacated his title following a spat with Dana White.

Santos gave Jon Jones all he could handle for five rounds at UFC 239. “Marreta” punished the legs of his opponent throughout the contest, so much so that Jones needed assistance returning to the locker room after their bout. Still, Jones was the more efficient fighter for most of the contest, which allowed him to capture a narrow split-decision triumph. Santos had a four-fight winning streak snapped in defeat, but he must nonetheless feel encouraged by the fact that he was the first Jones foe to win a scorecard against the pound-for-pound great. The Brazilian will be out for an extended period of time after undergoing surgery on both knees following the bout.

In giving Jones arguably his most difficult test since the champion’s first bout with Alexander Gustafsson in 2013, Reyes earned his respect as a worthy title challenger. However, it could’ve been so much more, as many unofficial scorecards had him winning the fight’s first three rounds. Reyes’ length, power and athleticism were a handful for Jones, but he faded just enough down the stretch for Jones to get the nod on the scorecards. Regardless, the performance should keep “The Devastator” near the top of the list of light heavyweight contenders.

Blachowicz has come a long way since the beginning of his UFC tenure, which he began with losses in four of his first six bouts. The Polish light heavyweight has since gone 7-1, perhaps punching his ticket to a title shot with a first-round knockout of Corey Anderson in a rematch in the UFC Fight Night 167 headliner at the Santa Ana Star Center in Rio Rancho, N.M. Blachowicz’s has shown his formidable power in recent wins over Anderson and Luke Rockhold, and he also caught the eye of Jon Jones — who was seated cageside — with his latest performance.

Anderson had a chance to earn a shot at the light heavyweight crown with a victory over Jan Blachowicz at UFC Fight Night 167. Instead, “Overtime” paid dearly for throwing an ill-advised low kick, as he was knocked cold by a short right hand from Blachowicz in the opening stanza at the Santa Ana Star Center in Rio Rancho, N.M. It was a far different result than UFC 191, when Anderson controlled Blachowicz with his wrestling for three rounds to win a unanimous verdict. That defeat snapped a four-bout winning streak for “The Ultimate Fighter 19” winner, who has some work to do to get back into position for a title shot.

Teixeira demonstrated that he still has plenty left in the tank at UFC Fight Night 171, where he defeated Anthony Smith via fifth-round technical knockout in the evening’s headliner at VyStar Veteran’s Memorial Arena in Jacksonville, Florida, on May 13. After weathering a strong start from Smith, the 40-year-old Brazilian put a lopsided beating on his opponent that proved to be difficult to watch at times before the stoppage. After an up-and-down stretch from 2016 to 2018 that saw him alternate wins and losses in six Octagon appearances, Teixeira has reeled off four consecutive wins in UFC competition.

Anthony Smith entered the UFC Fight Night 171 headliner with designs on clawing his way back into title contention, and early on in his bout with Glover Teixeira, he looked to be well on his way to adding another veteran name to his resume. However, things went swiftly downhill beginning in Round 3, and the Brazilian administered a lopsided beating to “Lionheart” until the contest was mercifully halted at the 1:04 mark of the fifth stanza. Smith has largely been a success story since moving up to 205 pounds, with finishes of former title challengers Alexander Gustafsson and Volkan Oezdemir on his ledger. However, the loss to Teixeira could prove to be a difficult beating from which to rebound.

Gustafsson suffered a disappointing loss on home soil in the UFC Stockholm headliner, falling to Anthony Smith via rear-naked choke in the fourth frame. “The Mauler” left his gloves in the Octagon following the defeat, announcing to the crowd at Ericsson Globe, “The show is over, guys.” Gustafsson further clarified his decision in later post-fight interviews, and it seemed that Swedish star was intent on following through with retirement. However, after more than a year and a half of inactivity, Gustafsson is expected to return to action — at heavyweight — against Fabricio Werdum on July 25.

After losing a contentious split verdict to Dominick Reyes in March 2019, Oezdemir had to be happy to be on the other side of a narrow decision when he took two of the three cageside judges’ scorecards against Aleksandar Rakic at UFC Fight Night 165 in Busan, South Korea. Oezdemir battered Rakic’s leg with low kicks, defended takedowns and worked well in close quarters to earn his second consecutive triumph in the Octagon. The Swiss fighter has already experienced his share of peaks and valleys during his promotional tenure, but “No Time” appears to be trending upward once again. Oezdemir will welcome Rizin champ Jiri Prochazka to the Octagon at UFC 251 on July 11.

Rakic entered UFC Fight Night 165 looking like one of the top prospects in the light heavyweight division, but the Austrian still has some work to do to become a top contender following a split-decision loss to former title challenger Volkan Oezdemir in Busan, South Korea. Rakic was competitive throughout the contest but was unable to put his stamp on the bout while adopting a counter-fighting approach. Nonetheless, the future still looks bright for the 27-year-old, who saw a 12-fight winning streak come to an end.